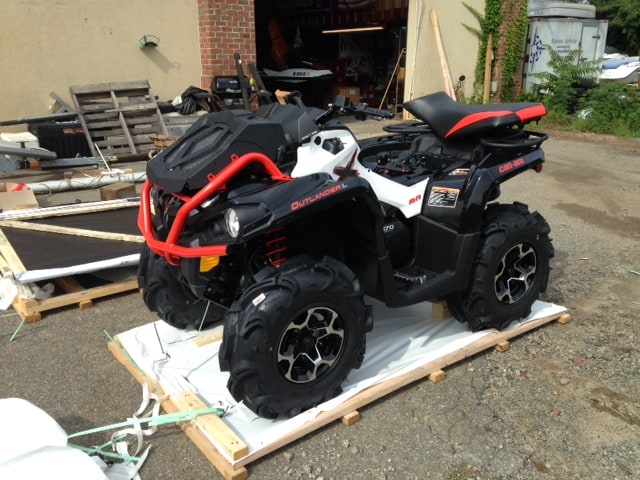 Can AM has released the new 570 engine and to accompany that they also made a xMR version of the Outlander L. Which makes me wonder why they even still make the 650 xMR?

The 570 xMR is just right with the best value for the money on the market!

I’ve got to say, all the xMR look great and the 570 is no different. We still have the relocated radiator and air intake but with the Outlander L lights and front bumper. Keep in mind that the Outlander L models are on the same SST G-2 Frame as its bigger brother the 1000 xMR.

Haven’t Seen That in Awhile

One of the first things I noticed was the left side handle bars have the old style control switches. I haven’t seen this style since 2011. They’ve updated the logos on the buttons but that makes me wonder why they brought that back. Just a little odd that they would bring back the old switches back, what was wrong with the new style?

We still have the same gauges they used for 2015 Outlander L models. Tells you Speed, rpm, Gas, what gear you’re in and much more. One great perk of the gauge is that all the read outs are easy to see.

Just like all the other xMR machines Can Am has placed the Radiator on top. Got to love a stock “out of the box” unit that is mud ready! Also the Can AM Red around it on the front bumper just looks amazing!!!

Don’t forget to notice that the radiator has a nice metal cage around it, none of that plastic stuff from other manufactures. This is the exact same size radiator they use for the 1000 version of the xMR’s, so its sure to keep heat down.

The Outlander 570 xMR is rocking the Maxxis Mudzilla Mud Tires stock out of the box. Also notice that you get the nice aluminum XT rims. Its not normal for Can AM to give you such a nice rim and tire package at the price point the 570 xMR.

This might not be a big deal for some but to me its not the same. The Outlander L models use a standard cut key for turning on the machine. I’m a big fan of the DESS key system they use on all the other machines they have. Not only for security, it has over a million combinations and makes it harder to steal, but the DESS key also has a slower key option. With a DESS key they have a “normal” key which limits throttle response to make the machine more tamed and it would have been nice to have that on the 570 models.

Just like the other Outlander L models you have storage in the real. Lifts from the top which I find easier to use compared to its bigger brother that opens from the rear.

I’m a sucker for details. Got to love the carbon fiber look of the seat with the Can Am red stitching. For such an affordable model I’m shock to see this level of detail. Show me a Honda with this much care given to a seat!

Proudly wearing the 570 logo and 4×4 visco-lok. You’ll also notice the aluminum foot rest to keep your feet locked in going through the mud.

With the radiator moved to the top and no winch you have plenty of room in the front. I do recommend getting a winch (Amazon Link Ad), because if someone is not getting stuck then you’re not having fun.

Lifting the top of the dash you can get access to the air intake and breather tubes. Also a little more forward is your fuses. The best part is the ability to get to all of this without any tools!

Sitting on the Can AM Outlander L 570 xMR feels like a full size machine. For an entry level machine it sure doesn’t feel like one. More than enough power to get you in trouble!

A Look at the Rear

In the rear there is much to talk about. You have spot to install a tow ball. Single Brake Light with reflectors on each side. TTI suspension, no butterfly effect when going over rough terrain which keeps you going in a straight line. I must admit that the rear end looks a lot better than many other manufactures front ends!

Like I said before, I’m a sucker for the details. All the Outlander’s now have this super easy to change battery location. All you need is a 10mm wrench and socket to pop a new battery in. Also, the starter relay is easy to reach too. Its nice to know that everything is easy to work on if you ever have to work on it.

Don’t forget to check out the must have accessories for your ATV!