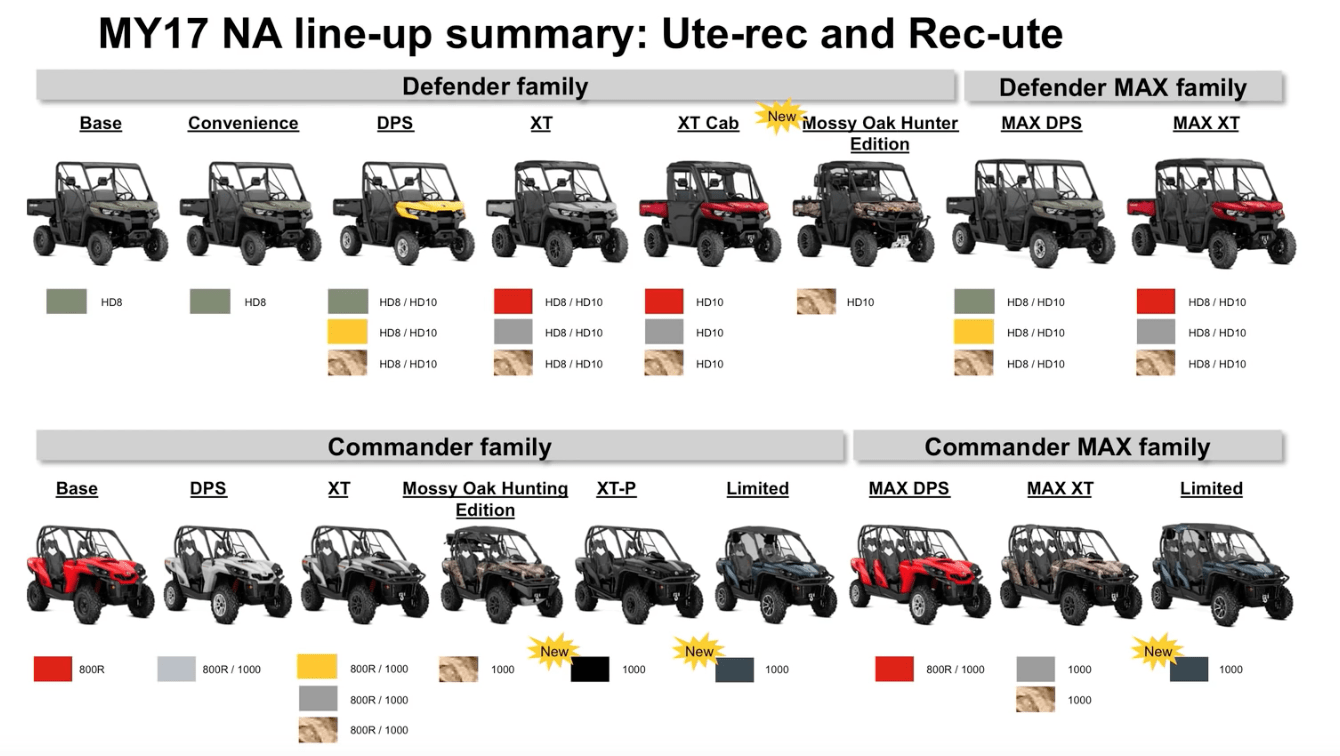 Can AM just released the new 2017 models. There is a lot of changes that happen and some of them I would have not guessed.

I would have never guessed a Renegade 570 xMR?! Or a Maverick xMR MAX?!

We already knew the Defender Max was coming. They also released a new Hunting Edition Defender which is gives you great bang for the buck.

Can am has made the most affordable and feature rich Maverick Yet. The Maverick xc 1000r non-dps model is a strong contender for anyone looking to get an affordable side by side with power.

This one took me by surprise. I never thought that Can AM would do a 4 seater Maverick xMR Max but they sure did. Plus its in the octane blue and hyper silver which looks amazing.

The 570 looks almost like its bigger brother 1000 xMR! Besides the tires, winch, and engine stickers how else would you tell them apart?

Well, not really. Can AM has dropped the “Outlander L” name and I don’t blame them since its hard to say. From now on they’re all called “Outlander”.

The 450 and 570 engines will be on the G2-L frame and the 650, 850, 1000r will be on the G2 frame. The “L” frame has different storage racks, lights, and other little details from the regular frame. To the average person both frames will look the same and even sit the same.

Also as you can see above is the Outlander XT and Outlander XT Max option in the 570 model only. The XT will get power steering, 25 inch Maxxis tires, Front and rear bumpers, handlebar guards, 3000 pound warn winch, and two colors of yellow or magnesium.

Can AM brought the DS70 back to the market and gave all the Little DS models a new color for 2017.

Something really cool in the accessories is the added Speaker Box option that allows you to play your music in the trails. Also mud flap extensions are available too!

Some Can AM models will get the new QS3 Fox Shock. They’re tool free adjustments, and a huge ranges of adjustments.

Can am has made some changes to the front sway bar to increase stability in cornering.

If you look at some of the new models something looks different. Its hard to spot, but then you look at the tires and rims and noticed that they got better and some got bigger.

The bigger tires gives a better ride and comfort. Plus helps out in the roughest of areas. The XT goes from a 12 inch wheel to a beefy 14 inch and the DPS models also get a bigger wheel too.

On the XT-P and models they get a 14 inch beadlock wheels.

The xMR models get a new look for the rim.

Lets not forget that Can AM is the leader in power…

Can AM has released a new key design. The keys are still programmed to your machine so to make stealing them harder. You also still have the different performance keys to tame the machines down.

This key is the same key that Seadoo and Skidoo uses so its only natural that Can Am goes to it. This key has been a huge hit for us on the Seadoo and should work well in the ATV and Side by Side. This key was also available as a work mode for the Defender so its been in used for a bit now on the Can AM Side.

While other manufactures use simple cut-keys that anyone can hot wire, can am uses digital keys to help protect your machine. Only dealers can program these keys!

Also a SuperWinch 4500 pound will be put on Commander and Maverick xMR models now. Super glad they’re going to SuperWinch, it feels like you’re just paying for a name on the Warn winches and the SuperWinch have been good to us.