I’ve listed the jet ski prices for all jet skis and I also gathered Top Speed, Weight, Weight Capacity, Storage, Seating Capacity, Transmission, Features, Fuel Capacity, and the link to the product page. You can get the full Export of 2018 Jet Ski Prices Here. Or check out the images below.

Even though this post is not meant to be a 2018 Sea-Doo Vs. Yamaha Vs. Kawasaki, it still does give you an idea and a way to compare all three to each other.

For some odd reason I forgot the Sea-Doo Trixx. You have two options, a 2up $7,399 and a 3up $7,999. The Trixx is made for someone who wants an extremely playful watercraft that you can do, well… tricks on. There is nothing else like it on the market and if you’re able give one a ride.

Images Of The Charts 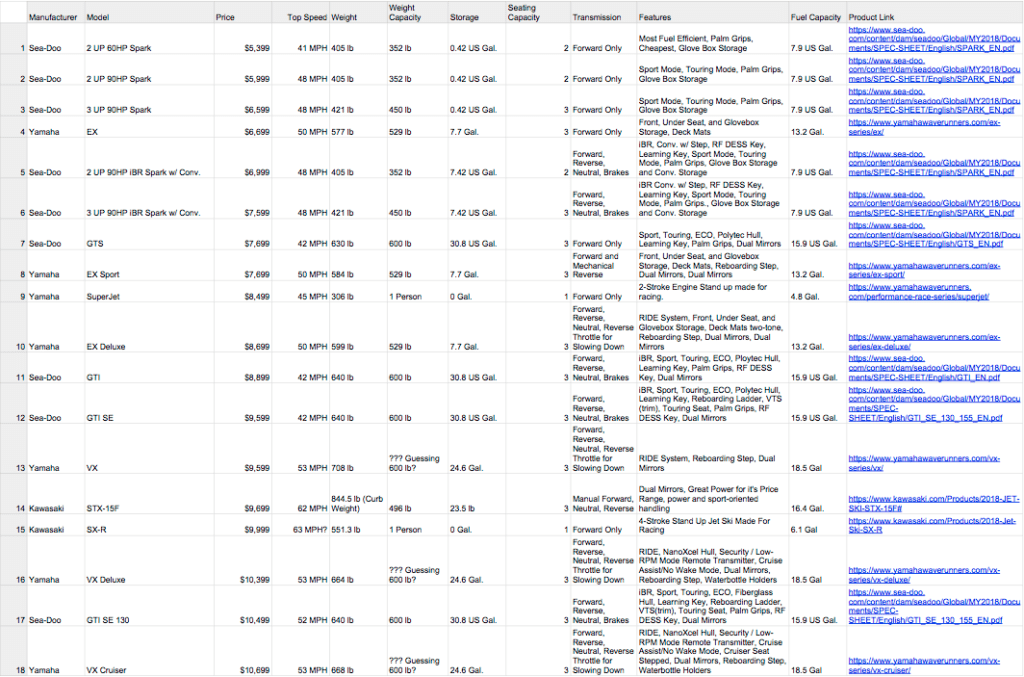 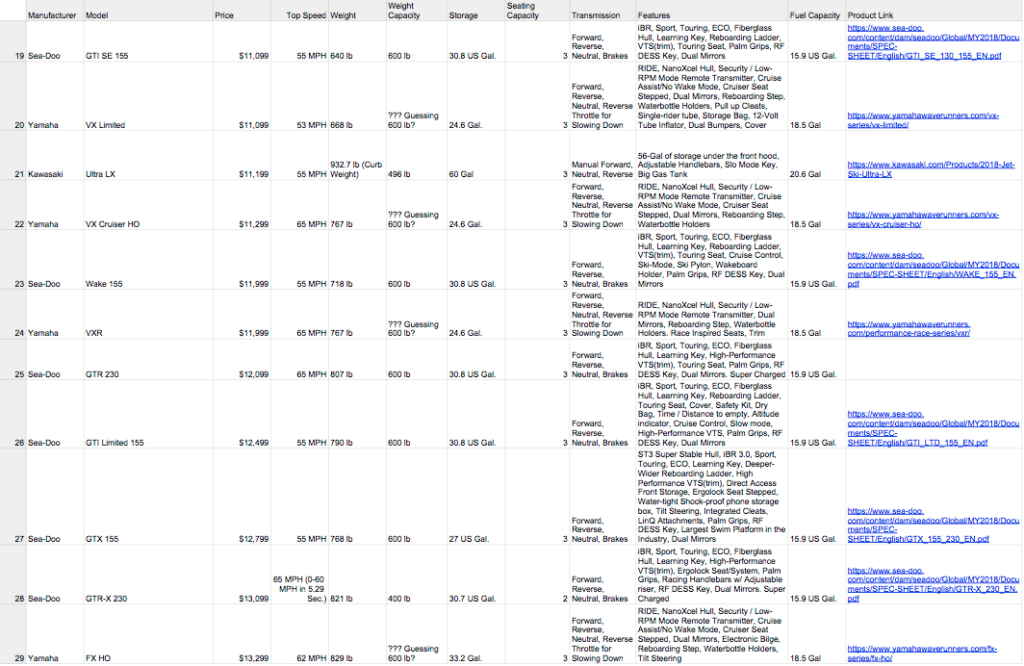 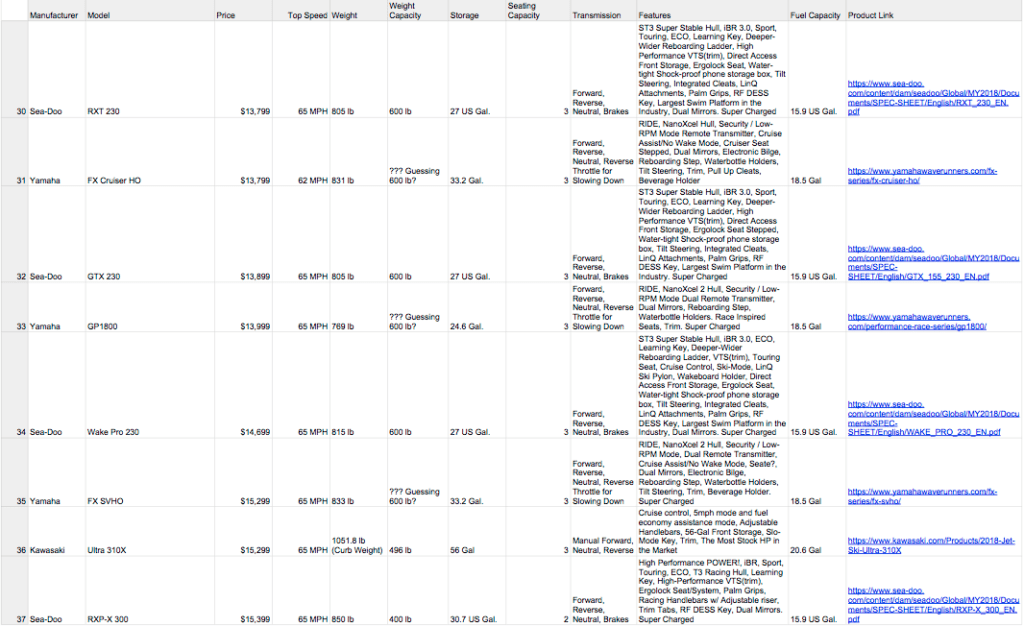 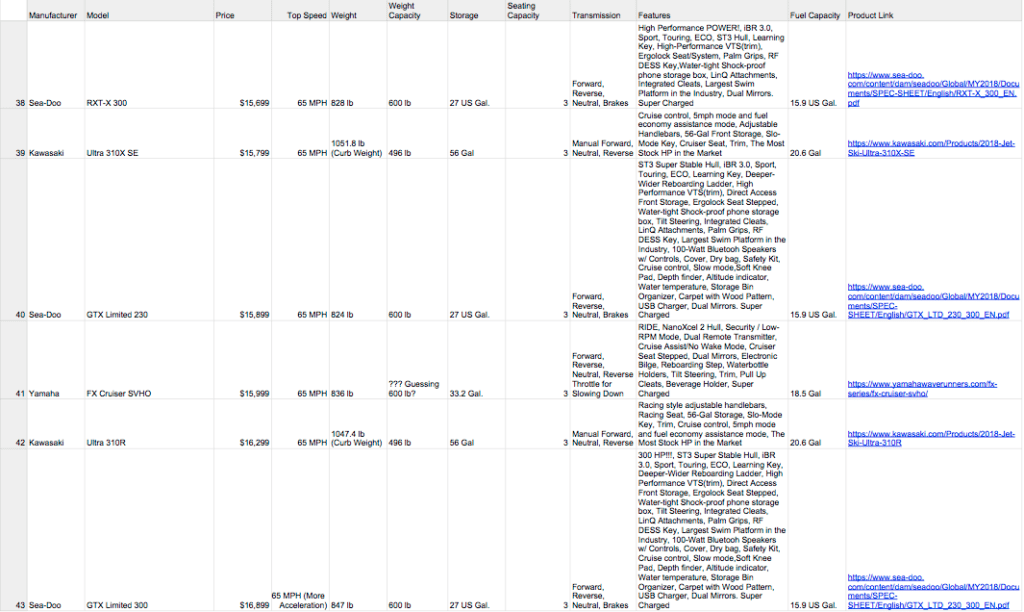 And Yes, I know some of you may have gone faster than 65 MPH on your old watercraft, but this has gotten more strict with the rise of much more powerful 0 to 60’s. And the fact that the old ways of measuring speed were merely guessing. Nowadays most watercraft use GPS to tell exactly how fast you’re going.

Another point on speed I want to point out is that Sea-Doo Seems to be very conservative about top speeds this year. They say the GTI 130 only goes 52 MPH but I’ve been up to 55MPH and I’m no small person. The same with the 90HP Sparks, they say 48MPH, but I’ve been 50MPH before. But I wrote down what they reported to be on the safe side so keep this in mind. Your experiences may vary, and that could be why they did it this way.

Keep In Mind – Because of this cap on top speed, many manufacturers have now focused on how quick they can get you to 65MPH. Keep that in mind as the 300HP models can take off a lot faster than the 230HP models even though they have the same top speed.

Some interesting points on fuel tank size are that Sea-Doo often had the smallest gas tanks of the 3, but they also had the lightest bodies on many of there models as well.

Kawasaki has the biggest gas tank in the market for their 310HP watercrafts, but they’re also the heaviest too.

Now for 2018 Sea-Doo has the option on it’s bigger models to add a gas tank accessory to the rear to increase how much gas you can carry. Along with making it more stable and better at handling the chop, Sea-Doo is edging closer to Kawasaki’s known ability to be great in the chop and to have a bigger gas tank for travel.

While a large gas tank is ideal for longer trips, it’s also not great for when it comes to filling up. The bigger the tank, the more you spend to fill it up. The good news is that many of the watercraft sold today have a type of ECO setting to help with the gas usage.

Sea-Doo is killing it this year in the weight category with being the lightest in most segments. Sea-Doo has the 2UP Spark at 405 lb which is the lightest sit-down watercraft on the market.

The GTI series from Sea-Doo with the Polytec Hull also is the lightest in that segment compared to Yamaha and Kawasaki. Then to top it off Sea-Doo’s new ST3 Hull is the lightest in its own segments and also the ST3 is the most stable too.

Yamaha is killing it with the VXR compared to Sea-Doo GTR with it weighing about 40 pounds less. On top of that, the VXR is naturally aspirated which means it has less moving parts. I must say the VXR is quite nice if all you care about is pure power.

Kawasaki is always killing it with how much storage they give you. The Kawasaki Ultra LX has 60 Gallons of total storage with most of it in the front storage bucket.

With Sea-Doo and Yamaha hovering around 30 Gallons that is quite the difference. But it does get to be a “pissing contest” at some point, and it looks like Sea-Doo and Yamaha figure that out by sticking with around 30. Not putting this achievement down, that much storage is a must if you do plan on doing long rides. But it looks like Sea-Doo knows this buy offering LinQ systems where you can add more storage to the rear of it.

I shouldn’t have called this category “transmission” because no watercraft has a real transmission as a car would. But I figured it would be the best way to understand the forward, neutral, and reverse.

All watercraft have a direct drive to the impeller, so when the engine is running the impeller is spinning. Unlike a boat, you don’t have a “real” neutral. But watercraft with iBR (Sea-Doo) or RIDE (Yamaha) have a neutral setting which keeps the directional bucket in the middle of forward and reverse.

The interesting part is that Kawasaki still has yet to make their own version of iBR or RIDE and they stick to the manual levers from years ago.

iBR is intelligent brake and reverse. You control the watercraft with triggers on each side of the handlebars, here is a video showing this off. The right hand is forward, and left hand is reverse or braking. When you brake all you’re doing is throwing the craft in reverse but more controllably to stop you safely. Sea-Doo has had this since 2009 and is now on Generation 3 on its latest hull.

Yamaha uses RIDE which is the same thing but not. Due to legal issues, Yamaha can’t say it’s a brake nor does it act like a “brake.” The way RIDE works is by having “dual throttles.” The right throttle is for forward, and the left is for reverse throttle. And of course, if you want to slow down you rev the reverse throttle to slow down.

This reversing action is what makes the two systems so different. We could split hairs about this issue, but the best thing to do is test it out yourself. I’m a fan of the iBR system as it doesn’t rev the engine when I go in reverse until I tell it to, but to each their own.

Most watercraft are 3 seaters with the racing models either at 2 seats or 1 rider capacity.

I could not find much solid information on Weight Capacity on Yamaha and ended up making an educated guess being right around where Sea-Doo is at. Yamaha mostly sticks to telling us if the craft is a 2 seater or 3 seaters and not fully showing off the actual numbers. They also do this engine horsepower too while Sea-Doo and Kawasaki put it right in the name of the machine.

There seem to be some models by every manufacturer that just appears to be not needed. You have some models that the only difference is either color or a nicer seat along with the higher price.

I don’t fully understand why each manufacturer needs to have redundant models? I can understand having the option to have a different color, but when the only difference is a different seat, then it doesn’t make too much sense to me.

Another thing I noticed was that Yamaha and Kawasaki weren’t as clear on features and specs as Sea-Doo was and I feel like I may have left some stuff out. Because of this if any manufacturer wants me to append this post here is a link to my contact page. If you see anything that is not correct I’ll also add it too, just contact me through that link too.

Looking To Buy A Jet Ski?

If you’re in the market to buy a jet ski you’re going to need the correct riding gear and all the advice you can get. I have a guide on the 107 Accessories & Tips that you should check out here. If you’re completely new to the sport then check out my beginner’s section here.