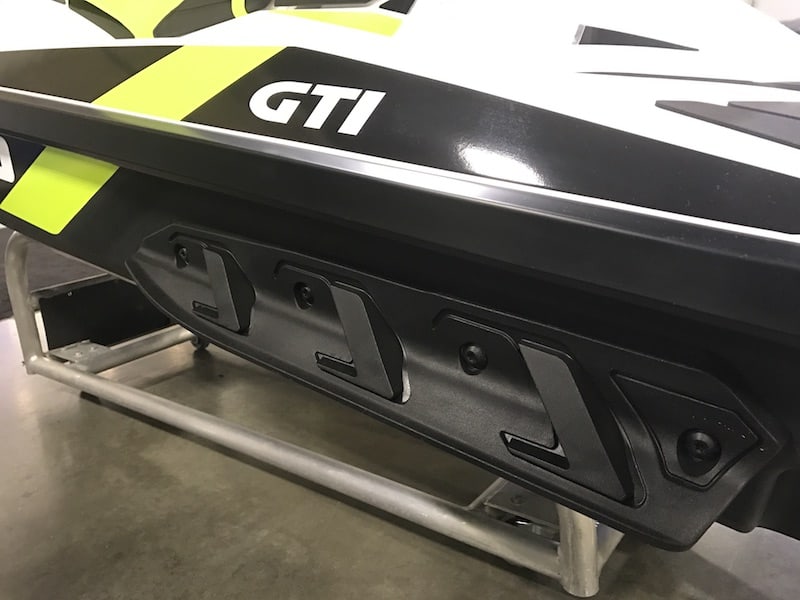 Update: Check out First Impressions of the 2018 Sea-Doo Lineup and learn the Good, The Bad, And The Ugly.

We haven’t even gotten through the 2017 summer rush of watercraft, and there is news that Sea-Doo is working on the “next big thing.”

While no one but Sea-Doo knows what it’s going to be but all the sources are saying it is going to re-think the jet ski world kind of like how the Spark did.

This is big news! And it makes the mind wonder what it really could be. We will know more as the summer passes, but it’s interesting to guess what it could be. So let’s do that.

If you’re not sitting down, then you might want to find a seat when you get near the end of this post.

If you’re a genuine Sea-Doo fan, you would had a laugh at the words “Stand Up.” Sea-Doo tried the stand up with the 3D and failed horribly at it.

The biggest reason why they failed was that it wasn’t a fully stand up machine, they wanted a machine that could do 3-things. While it did 3 things okay, it never did the stand-up thing really well. So it flopped, and 2007 was the last year we saw a 3D.

But Kawasaki came back in the stand-up game with a 4-stroke model, and this makes me think Sea-Doo wants to join in. Sea-Doo could quickly put a Spark ACE engine in a Stand-Up body made of Polytec and kill the stand-up market.

The Sea-Doo Stand Up would be the lightest and probably the fastest stand up on the market. That Polytec gives Sea-Doo a huge advantage over everyone else.

I’m not a fan of the Stand Up Watercraft, but if Sea-Doo wanted to do it, then it would seem highly possible.

What They’re Not Going To Do

To be able to guess what they can do it’s best to understand what they won’t-doo. I know they won’t create a Speedster 150 or any larger 4 seaters “boat” style machine. Scarab has them on lock down on that idea.

We know that they’re not going to do 350HP engine anytime soon. I think the engine segment is good and no improvements to them are going to happen for at least 10 years.

Now time for the crazy ideas.

I know that Sea-Doo and the people who make the Fly-boards have been working on a Spark Fly-Board machine. Basically, a Spark with double impellers that would only be used with the Fly-Board. (This is hearsay and I can’t confirm this)

Having a Jet Ski “Jet Pack” that you can buy at a dealership sounds like the coolest thing ever. But there would be some hurdles with it. Mostly lawyer type stuff, so it might not be possible. But you never know.

Do we have any clues as to what Sea-Doo is planning on doing? Yes, in 2017 Sea-Doo dropped the iS models and made them only S models. So now you don’t have intelligent suspension anymore and just have regular suspension instead.

This could be a cost thing or to make things simpler.

Or this could mean a new luxury style watercraft is coming?

Another Clue is Polytec. Sea-Doo has started to move to the Polytec Bottom on the GTI base model. This is such a great idea that I even declared it the best watercraft of 2017 here.

Sea-Doo knows the Polytec works because they’ve been testing it on the Sparks and making improvements ever since it came out in 2014. It might be time for Polytec to replace Fiberglass.

Moving to Polytec will happen. I think it will be the bottom hulls like they did with the GTI models first. What this will do is make the machines lighter, so you won’t need a big powerful engine to push them. Smaller engines mean better fuel mileage and better for the environment. Even the racing models will benefit the most from this as they will be faster with the weight savings.

But none of that matters.

What is important is what it will do with the watercraft industry. It will create massive waves if they do that for one simple reason.

If your entire line-up of watercraft switch to Poly-Tec then that also means they should in theory switch to a lower price. This will hurt the status-quo for other watercraft makers. The other manufacturers won’t be able to compete without losing money because what use to be very similar machines are not so similar because of the price now. I even talk about this price vs. value thing at the bottom of this post here where I compare the EX to the Spark.

If this does happen then this will be more massive than when the Sparks came out. This could drive Sea-Doo to have an 80% market share and dominate the watercraft world. All because other manufacturers can’t duplicate the Polytec technology that Sea-Doo has a handle on.

I’m sure Yamaha is not sitting around and already see this happening. I know that ever since Sea-Doo has come out with the iBR, they have really been kicking it into high gear to catch up and beat Sea-Doo. But can they do it time for this massive change that is bound to happen? It’s not speculation, Sea-Doo is showing us with the GTI that it’s going to happen. As to when it could be very soon or in a year or two – but it’s going to happen.

The whole landscape of what we think Jet Ski’s are or should be is changing. We use to think of them as Fiberglass Motorcycles, but now they’re becoming this futuristic plastic-hull-iBR-suspension motorcycle thing on the water. This makes sense as Polytec is proving to be better than fiberglass and also better for the environment because it’s lighter and doesn’t need a big gas guzzling engine.

This move to Polytec could also be a reason why the iS is gone. Removing the iS does save on weight, and this is important when you move to a Polytec Hull. This could all be a part of the transition to Polytec, but I feel the suspension models will be the last ones to get the new hull.

One of the very first machines that I see going to the Polytec hull is the GTR-X. It already has the GTI bottom hull, so it would be nothing to move it over to the GTI Polytec hull. When doing this, it will create a machine that would kill the GP1800 and give the watercraft the performance like what you get on the RXP-X 300.

Imagine an RXP-X 300 with a Ploytec hull? The zero to sixty on that thing would be insane!

I’m sure watercrafts like the RXP-X and the bigger GTX body will get a double walled Ploytec hull due to the abuse and weight it goes through, but it still would weigh less then it’s older fiberglass body.

After all, this is all a guess. Going to the Polytec hull makes sense as Sea-Doo is already doing it on the GTI models.

But what I heard was ONE new thing and this hull is many new things if you ask me. I still feel like the hull change is going to happen but it might not be the ONE new thing for 2018.

What I do know is that when Sea-Doo say’s they’re going to do something cool then you know for sure it’s something cool. I would have never guessed a plastic watercraft, brakes, or suspension would have come to the watercraft world but it did.

Sea-Doo is still saying they have something big coming to 2018 Sea-Doo Watercraft. As to what that something big is we still don’t fully know, but they say it will change the watercraft world.

Those are big claims.

I was talking to someone about what they thought it could be and they made a good point in saying that it could be electric. He wasn’t too happy about the idea but it really “sparked” my interest. Making an all electric Sea-Doo would be huge, no manufacturer has done it successfully.

Battery technology and electric cars have really taken off. You have Tesla making amazing electric cars that get over 200 miles on a charge and they’re working to increase that even more. It was the batteries that were holding electric watercraft back and it seems to be solved enough to release to the public.

All the stuff they have been doing lately like going to Ploy-Tec is starting to make sense. Ploy-Tec makes the ski lighter which is important if you want an electric model. They proved they can do it in the GTI body which would be the perfect size for an electric ski. Can-Am, who is own by BRP who also own Sea-Doo have an electric UTV and even had prototypes of the Spyder Electric. It’s clear to say they have been working on electric for a while now and I would not be surprised that they have an all electric watercraft prototype out in the wild.

There will be downsides to an all electric jet ski such as charging it and range. The range issue might not be a big issue with the latest battery tech, but cost does come into play. Batteries are getting cheaper but I doubt the ski would be “cheap”. As for charging you would charge it on your dock or on the trailer near an outlet. This would be nice so you can avoid those expensive gas docks.

One other downside is water. Electronics don’t mix well with water. I’m sure they’ll have everything sealed up to where it does not matter but it does worry me. Not because of the shock factor, there are ways to stop that, but lithium batteries don’t do well when they touch the water.

Told you something big is coming…

Important: Winter is coming so make sure you have a cover and a way to keep your jet ski battery charged when you’re not riding it! Don’t forget the thieves are still active so make sure to lock your jet ski down with this helpful guide.