The Spyder F3 was one of the very first machines I reviewed or even talked about on my site and one of the first YouTube videos I did on my channel. The F3 was created to break the mold once again from what people thought a motorcycle should be. 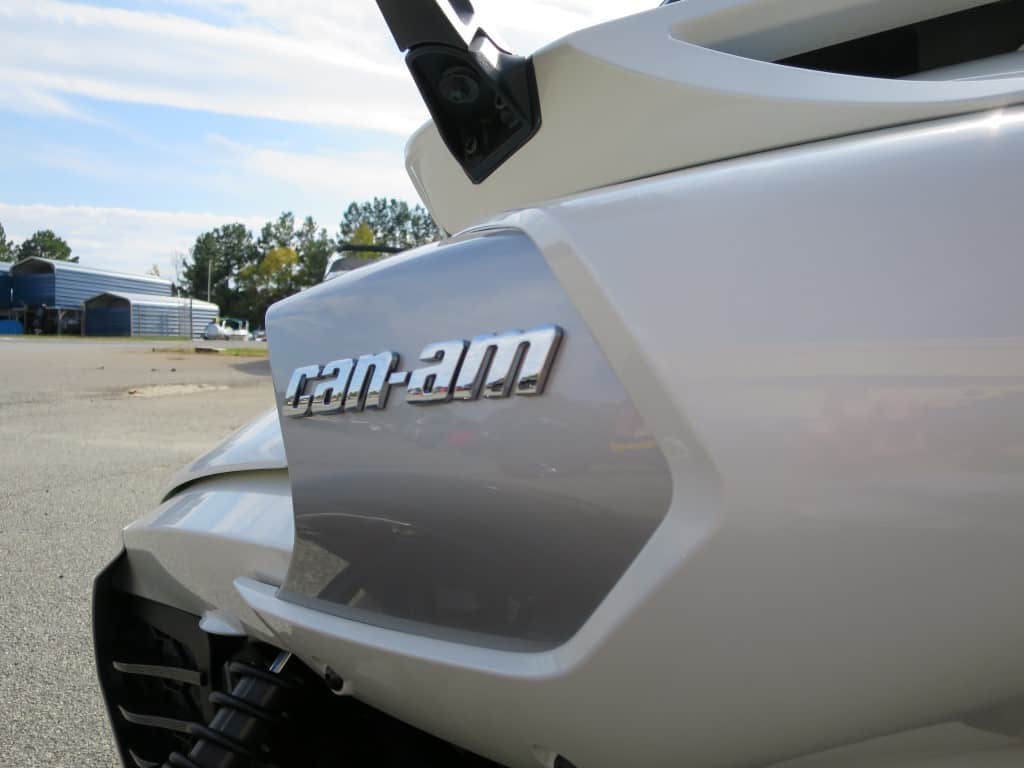 Its kind of obvious isn’t it, all Spyder have 3 wheels. The way Can Am does it is with putting two wheels in the front and one in the back. Having 3 wheels is not new, but the norm use to be that you only had one wheel in the front and two in the rear.

So why the two wheels in the front?

Simple, its a ton safer. When you go into the turns you lean forward and having the wheels in the front keeps you from falling forward. Plus all Spyders have a system that monitors each wheel to keep you safe (VSS) and plus you have ABS. 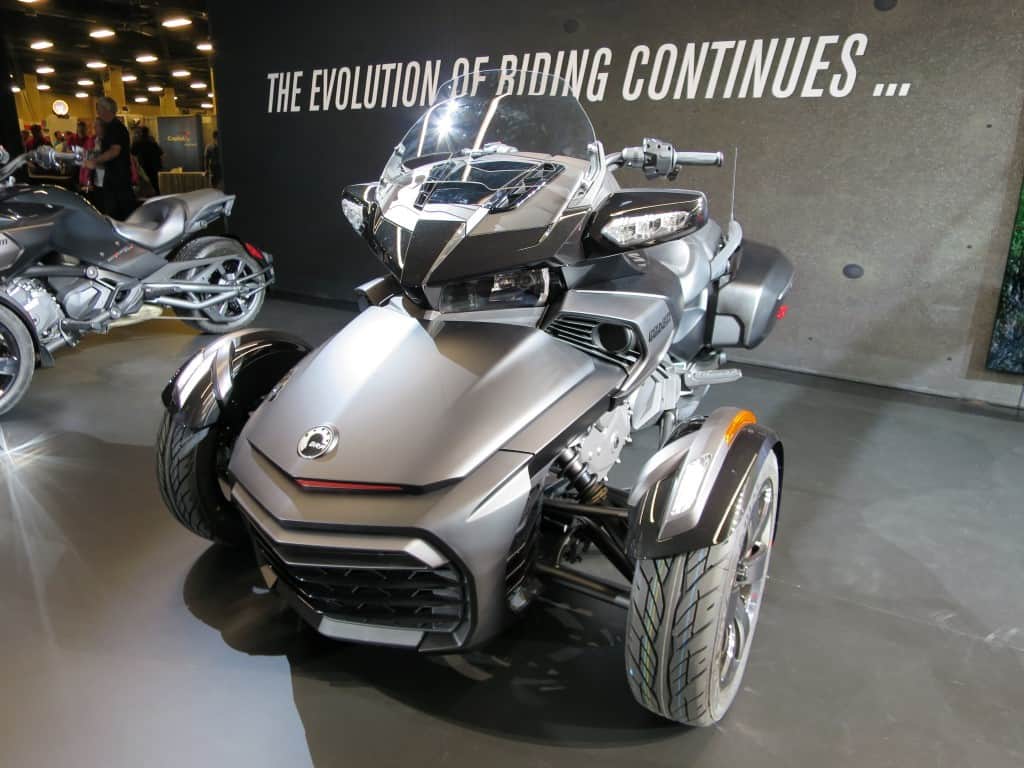 Talking about the 3 wheels reminded me of the release of the first Spyders in 2008. Can Am has been working on the Spyder for quite some time before releasing it. Usually they’re building things they’re going to release 5 year from now as we speak.

But the Spyder has been a project they’ve worked on for more than the usual 5 years ahead of time. I had one of the people working on the project that he was looking back at the original crew that started the project and some had mullets, that’s how long they’ve been working on it.

That little story always stuck to me, found it interesting. Also shows how much Can AM cares about the Spyders, it has become there baby.

Can Am started with the GS model back in 2008, it was a sporty style motorcycle that really took off. People loved it so much we could barely keep them in stock. The problem was that it was not perfect and many people were customizing it with things like handle bar risers.

This was back when I started working at the dealership and was putting the machine together and I never really liked those handlebar risers. Coming from those risers to the new way that Can AM does all the F3 accessories makes me love the ease of installing F3 parts.

So Can AM listen and came out with the RT which had the handlebars raised up, saddle bags, radio, and many of the features people wanted. The RT was a even bigger winner in 2010 when they released it and still is one of Can AM’s best sellers.

But some people didn’t like the RT, it was too big for some and they didn’t like the feel of the RS that was out by then. (The GS became the RS, same look and feel) So Can Am came out with the ST, which is a cross between the RS and RT.

Can Am realized later that they completely missed the cruiser-sport market so the F3 came to be. I have ridden and put together and taken apart every Spyder Can AM has made and to me the F3 is the height of perfection from Can AM.

The F3 is the combination of Can AM learning through the years on how to make the perfect 3-wheel motorcycle and it really shows. 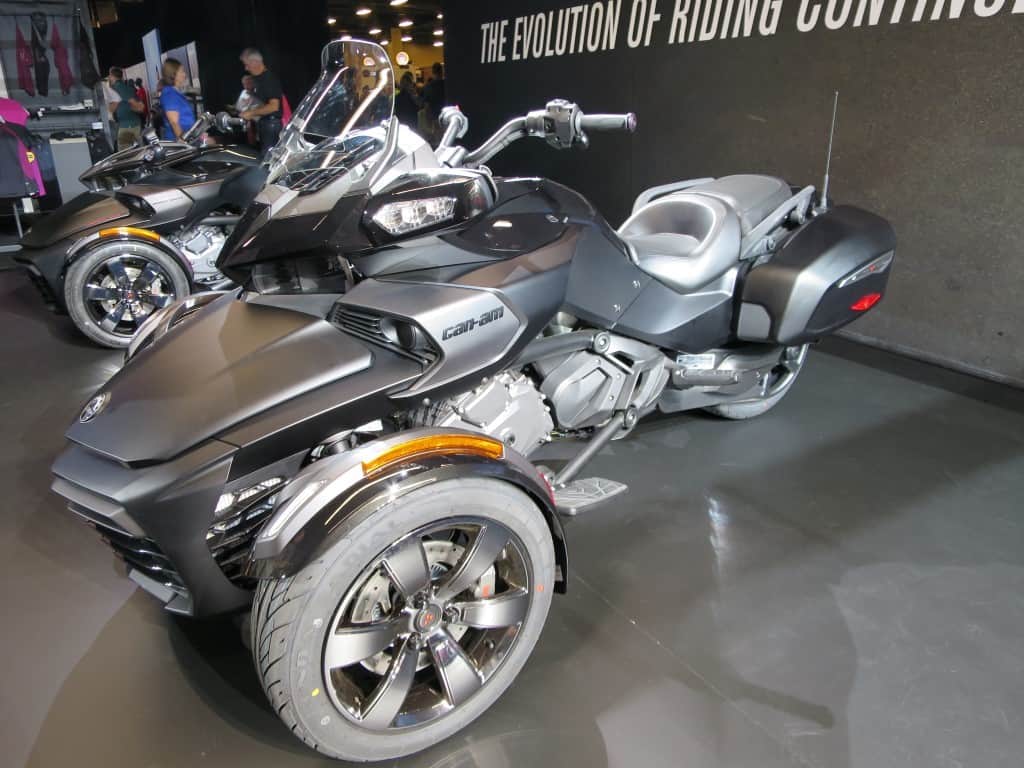 Why Is There No Love For the SM6?

You have two transmission options when it comes to Spyders. You have the SM6 and the SE6 (smaller engines have SM5 or SE5). What this means is that the the “M” stands for manual and the “E” means electronic. The number means how many gears it has, so a SM6 will be a 6 Speed.

All Spyders have a REVERSE gear no matter what trans you get. 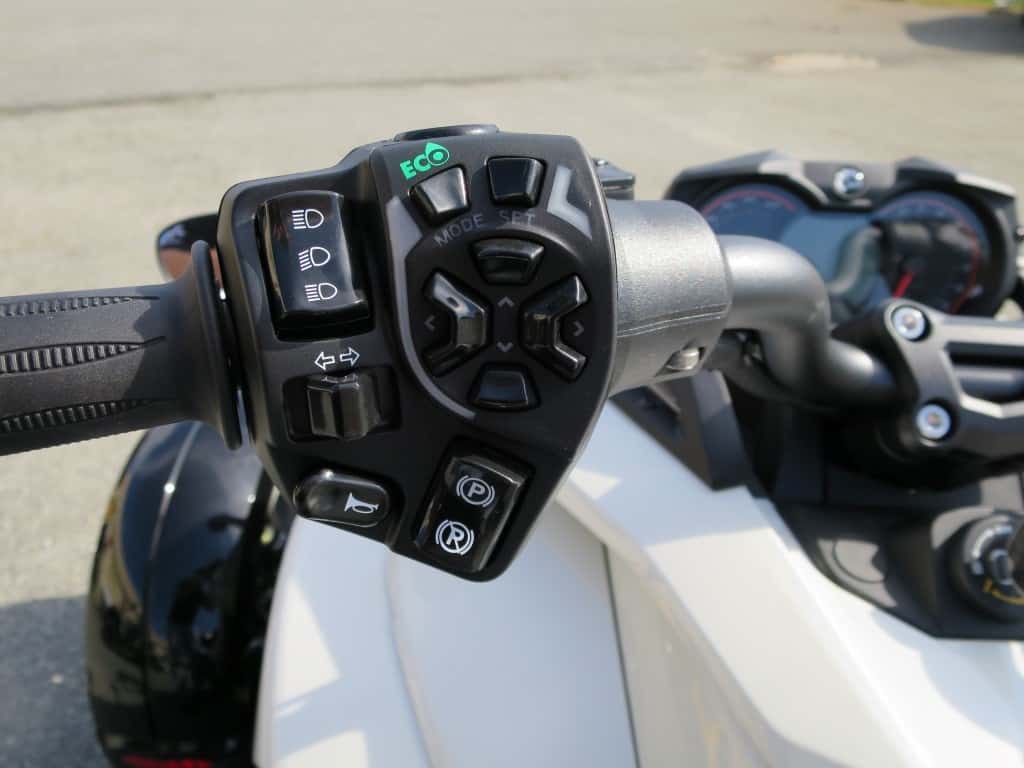 I’ve sold quite a few Spyders and the number one thing people say is that they want the automatic transmission Spyder. There is not fully automatic Spyder, they do have a semi-auto which is called the SE6 or SE5. You have to shift up but it will shift down for you, the biggest thing is that it does not have a clutch to worry about.

The SM6 or SM5 are the manual transmission where you do have a clutch to pull in before shifting.

I can understand why people love the SE6 or 5. Its the easiest transmission but its not the best. The SE6 takes away the fun of a motorcycle, the thrill of the ride and the being one with the machine that only a SM6 can deliver.

But I feel like the SM6 gets no love when its probably the best and most fun of the two transmissions. But to each there own.

Blow The Heat Away

One little new feature about the F3 is that it now has the radiator on the sides away from the driver. One of the complaints I often got from Spyder owners was that the hot radiator air would blow on them and make them feel hot.

Can AM listen and later made the models that had the fan reverse directions when you came to a stop. 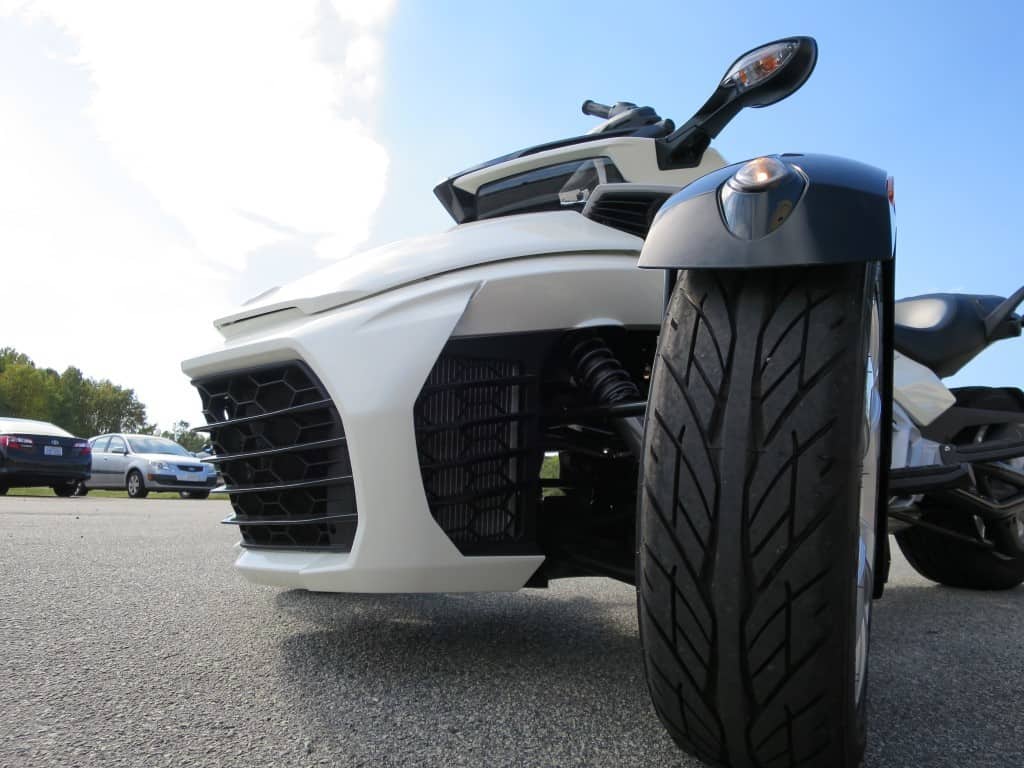 The F3 took a different approach. The radiator is mounted so that the air blows to the left or right of you and never on to you. This is a far better approach to the problem which makes the F3 a lot cooler to ride on those hot days.

You also have front storage that can fit many things. Check out the picture below for the storage. 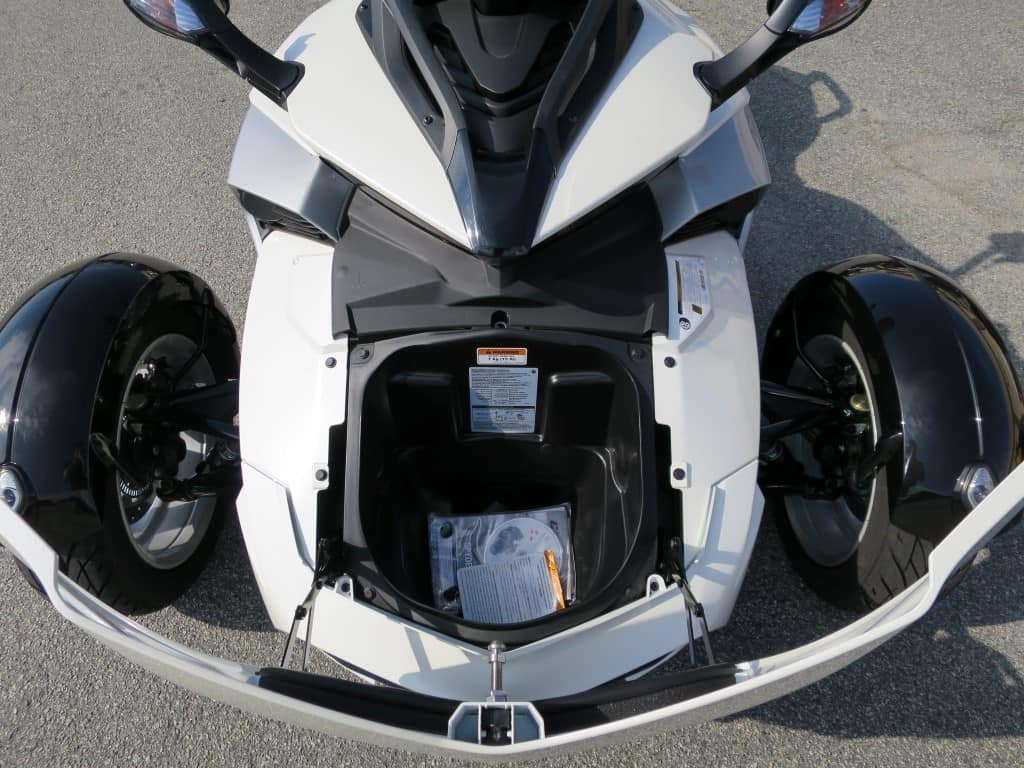 One little perk of the F3 and its 1330 engine besides it being better on gas than older machines is that it has a actually alternator. The old 990 engine that is still in the ST and RS has just a regular Stator.

This important for many reason. If you like to add a bunch of electrical accessories to your bike you want to have the alternator. The Stator and Alternator do the same thing, but the Stator only maintains a charge while a Alternator put it back and then some. So basically a alternator will actually charge the battery and the Stator will maintain the charge.

I see about the same life out each battery no matter what engine you have. The life of the battery really is determine by the owner of the bike and how often they ride. If you’re not going to ride often (weeks) then I recommend getting a smart charger or even a solar charger to help keep the battery alive.

Not many people know this but all Spyders including the F3 have power steering. It actually works quite well. 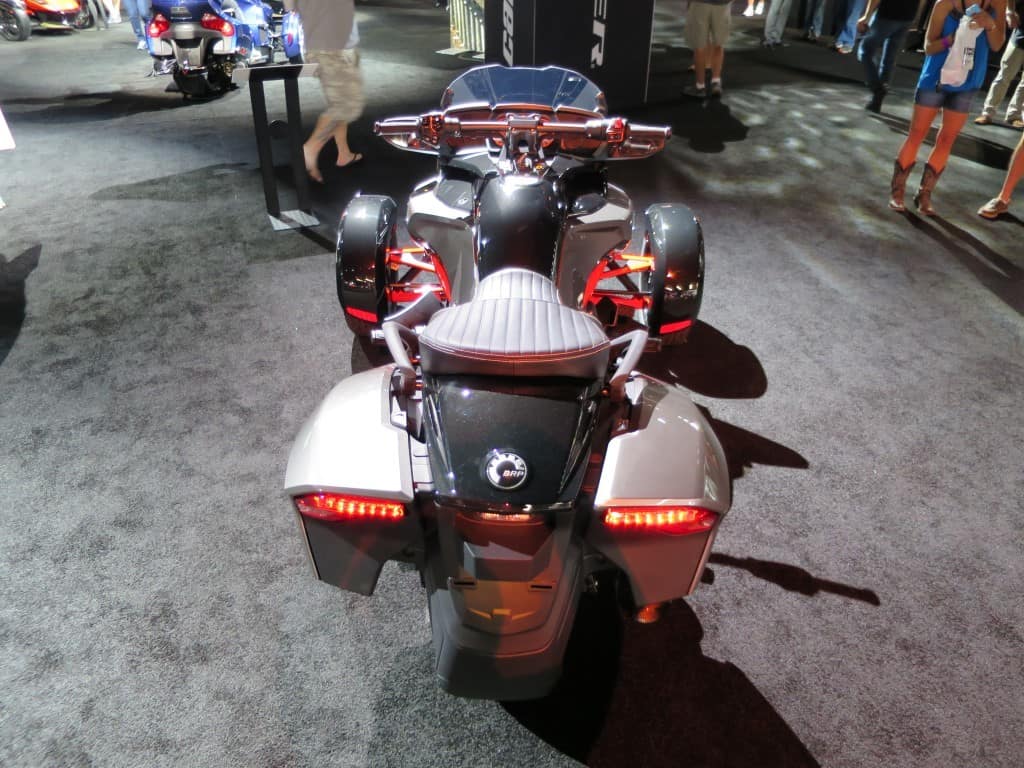 In 2016 Can AM has taken the F3 a step further and come out with some new models. I really think the F3-T to be a real success, but all share the same style of the F3.

I actually went to the release party for all the BRP products, so fell free to check out the awesome showroom video they had set up for us…

Make sure to look at what Can Am says about all the latest features and offerings here. I’m not perfect so I might miss a feature, confuse, or not correctly show features. 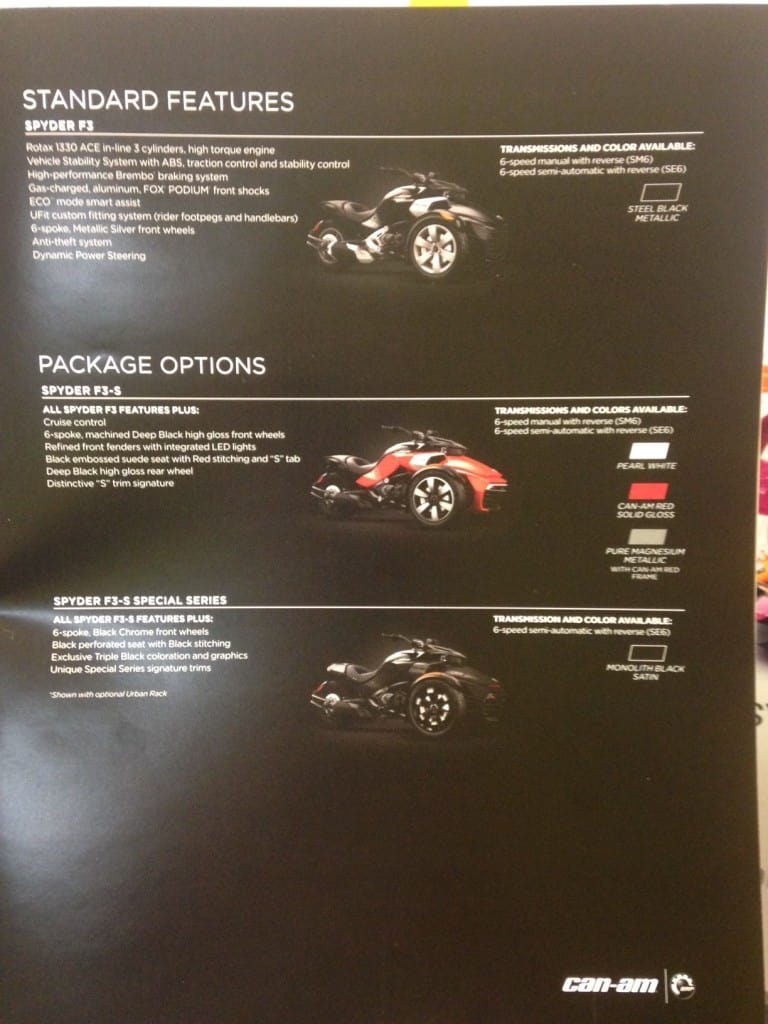 The Regular F3 comes with..

The F3-S Special Series comes with 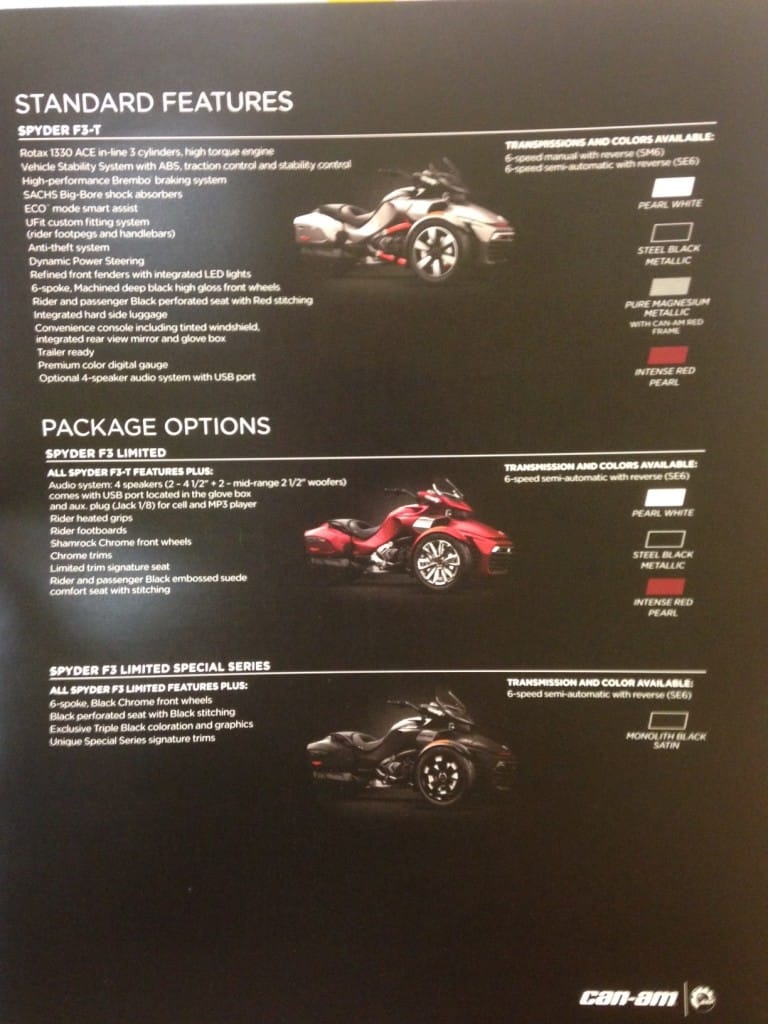 The F3-T and what they have

The F3-T, F3 Limited, and F3 Limited Special Series will have the saddle bags with them. These packages will also have the following…

The F3 Limited will have…

The F3 Limited Special Series will have…

The Limited Models only come in SE6 Transmissions. 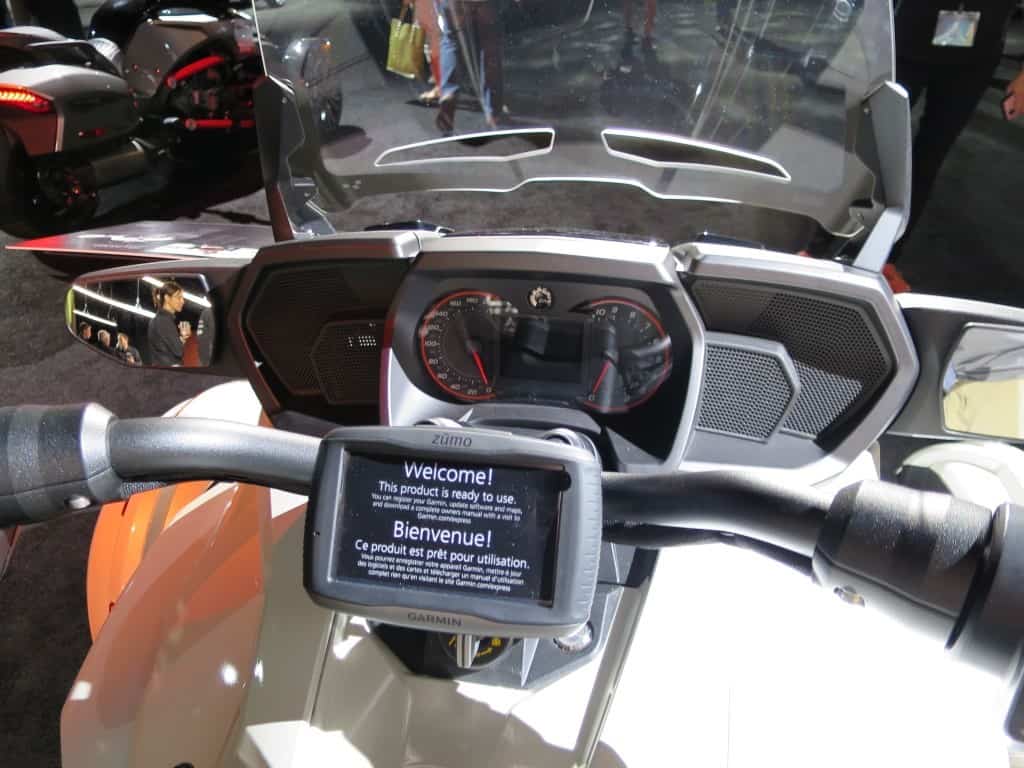