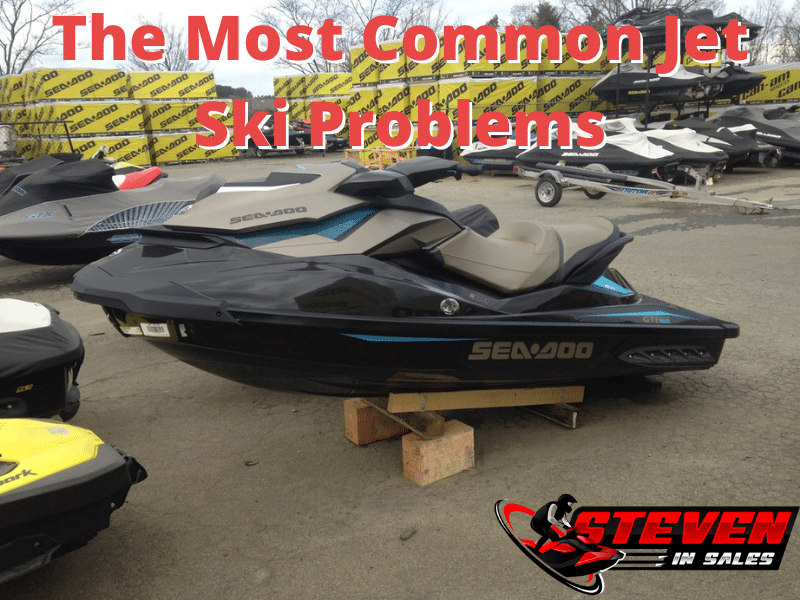 Before you get a jet ski you may be wondering what kind of problems you may run into.

While every jet ski is not the same, they all tend to have some common problems that you should expect.

Here are the top 11 common problems jet skis tend to have.

Jet skis are giant vacuum cleaners and will suck up anything that gets in front of the pump.

The most common thing to suck up is tow rope with sticks and rocks right behind.

Most people forget about the tow rope when doing pull sports and will back up or circle around in neutral until eventually the pump finds the rope. What sucks is that this can wreck the weekend quickly, it doesn’t always do damage to the jet ski, but it’s a pain to get the rope out.

It’s such a common problem that I created a post on how to remove objects out of jet ski pump.

It’s not that jet ski batteries suck, it’s just that people don’t take care of them.

Any lead-acid battery will go bad if you don’t use it for months. Since jet skis are not ridden in the colder months, many jet ski owners find that the battery is dead the next season. It’s dead because they did not keep it on a smart charger or small solar charger.

It’s not uncommon for jet ski owners to buy a new battery every year. Not only is that expensive, but there is a simple and easy solution.

If you keep the jet ski outside, then get a solar battery charger that you keep on it when you’re not riding it.

A lot of running and idling problems are often the cause of a bad spark plug.

And I’m quite shocked by how many jet ski owners refuse to replace them because they think it’s like their car. You may never change the spark plugs on your car often, but you should change them every year on your jet ski.

Jet skis use high-performance engines, and those engines can be picky. Not only that, but when you fog the motor for winterization, the spark plugs will often foul during the process.

Changing spark plugs on your jet ski is easy and cheap to do, and it can stop so many future problems.

Don’t get fancy with spark plugs, stick to the NGK ones the manufacturer suggest. The special tip and coating ones are a waste, the basic NGK are the best way to go.

As talked about in the last section, jet ski engines can be picky, especially if you have a supercharged one.

If you have a supercharged jet ski, then you need to run premium gasoline. I don’t care what the manufacturer sales teams says, run premium.

If you don’t have a supercharged jet ski, then run regular, as they’re not as picky.

The jet ski engineers are adapting to these standards and what they sell at the gas stations will be fine. But if you can get ethanol-free gas, then for sure use that.

The jet skis that suffer the most from ethanol are the 2-strokes with their carbs and fuel lines. Fuel lines on 2-strokes going bad along with the fuel selector could be its own section, but since 2-strokes are a dying breed and no one makes them anymore it’s not worth talking about too much.

More of an annoying problem, but your jet ski will fade over the years.

It’s very rare I find one that still looks like new, but most jet skis are faded.

The seats will also tear and crack over time.

The sun and water are the two worst things for any boat, and jet skis get plenty of both.

Fiberglass protectant and vinyl protectant will help, but the best thing you can do is keep your jet ski covered when you’re not using it. I’ve gotten to the point that I use two jet ski covers, as talked about here.

Dings and scuffs on your jet ski will happen, it’s just the nature of riding on the water and docking.

Fiberglass repair is not always expensive, depending on the size, and if you don’t want perfection you can often repair it yourself.

I wouldn’t worry yourself with a few scratches and dock rashes, as it’s only normal in the boating world. It’s when the damage is large and affects the structure of the craft that you need to worry.

When you see the white fiberglass underneath start to show, you need to get that fixed as it will try to absorb water and expand, worsening it.

With every manufacturer now moving to an electronic brake and reverse system, they can fail.

It’s a simple design, so failure is not something for you to worry too much about, but it is an electronic system. Also, brakes on a jet ski are not the same as your car, it’s more of like putting the jet ski in reverse. Brakes for jet skis didn’t come about until 2009 and before then it was manual reverse levers or nothing.

It goes back to the battery, the electric motors used for reverse and braking use a lot of power and if the battery is not good you can get check engine lights and things not working correctly. So having a good battery is key nowadays, and why I’m so big on keeping the battery on the solar charger when I’m not riding.

For the manual reverse, they use a steel cable that over time can rust and break, but not a huge concern for most people. If you do ride in saltwater, then it’s more of a problem for you.

I hope I’m not worrying you with this section. Your jet ski battery will be fine, it’s when you don’t ride your jet ski for months that the battery can go flat, so that is why I recommend keeping it on the solar charger. As for the brakes, let off the throttle, and you’ll fall behind your wake, then with no throttle spin in a circle, and it kills your momentum – this is how we used to dock jet skis before reverse or brakes.

This is more for people who ride in the ocean or salty water, corrosion is a huge problem with jet skis or really any boat.

If you do a lot of saltwater riding you need to regularly flush with fresh water and rinse out the engine compartment.

Corrosion on the electrical parts can create ghost problems that are hard to fix. It’s a good idea to spray silicone lubricant (Amazon Link Ad) on anything shiny and electrical on your jet ski if you ride in saltwater.

Also, don’t forget to replace your sacrificial anode when it goes out!

Superchargers are their own unique thing that needs special care and maintenance done.

Sea-Doo superchargers have their own history and maintenance, so I created a guide to help you with that here.

In general, it’s not always the supercharger failing that I write this, but sometimes the hoses come off. These things create so much pressure that a hose can come off, and you lose top-end on your jet ski.

Jet skis live in a wet environment, so it’s not uncommon for mold and mildew to get on your seats and jet ski covers.

Using mold and mildew remover (Amazon Link Ad) is a must for a jet ski.

I should have made this the first one, but this is such a common and annoying problem that every jet ski seems to have this problem with water in the footwells.

Keeping a cover on your jet ski helps, but sometimes water still finds a way in.

This sitting water in the footwells attracts bugs and mold, while also being a pain to remove.

The best thing to do is tilt your jet ski back a little to let the water drain out. If you keep the jet ski on the dock, then you’ll need to check on it from time to time. I like using the battery powered liquid transfer pump (Amazon Link Ad) for getting water out of the footwells while at the dock.

This is also why I push having two covers for your jet ski, as this helps even more to keep the water out of the footwells.

Yamaha has models with footwell drains and this is a huge step in the right direction, but they still get clogged.

The sludge and grime that builds up in the footwells with the water is just something you don’t fully understand until you get a jet ski.

So you must keep an eye out and remove any sitting water from the footwells. If you don’t remove the water, the fiberglass can blister and the mats can separate, but this can take years of constant water sitting in the footwells.

4 thoughts on “The Top 11 Common Problems With Jet Skis”