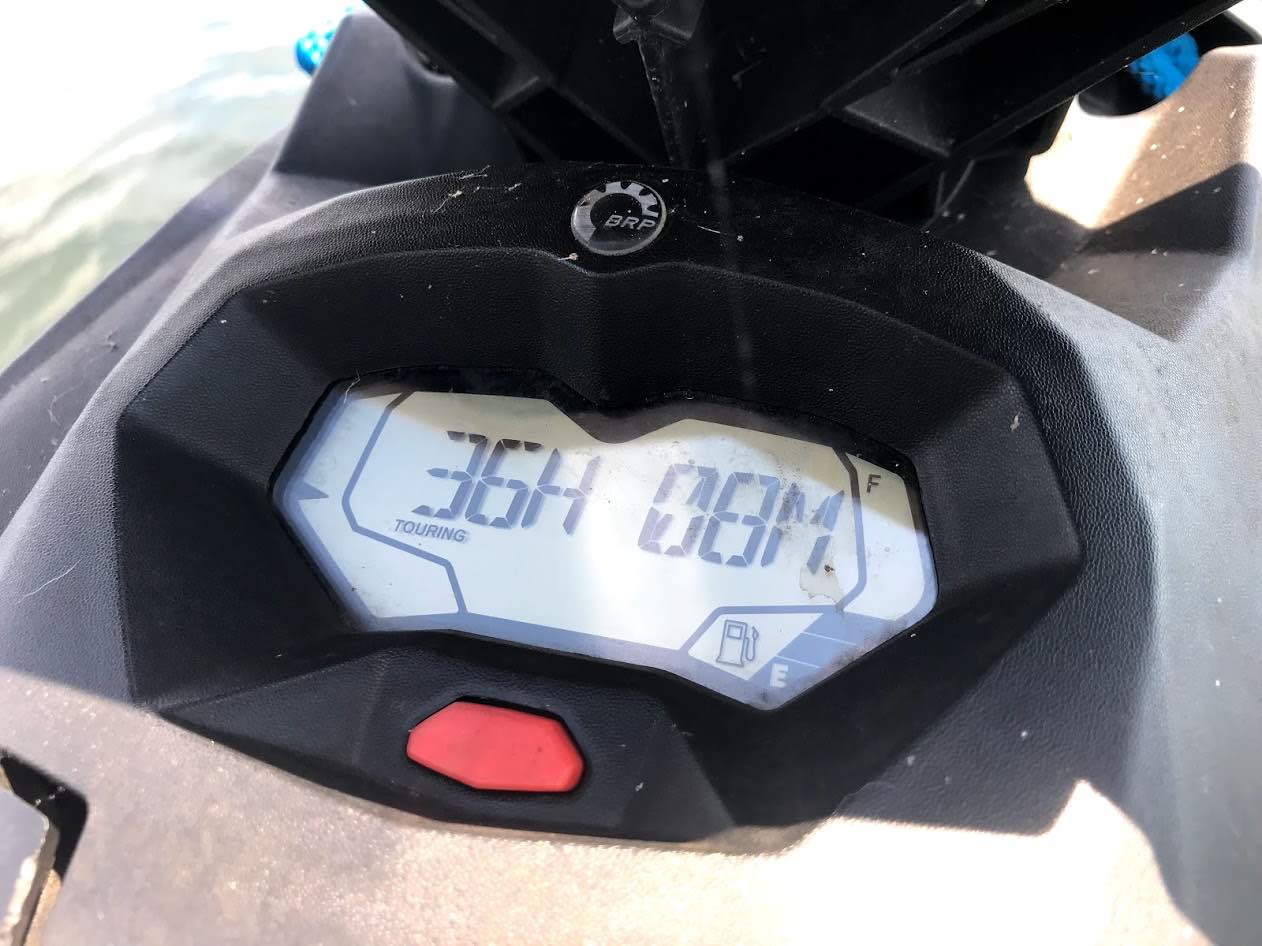 I’ve talked briefly about jet ski hours in my post on what to look for in a used jet ski. This topic is so vast I feel jet ski hours deserve there own post.

What Are Too Many Hours for a Jet Ski?

The average person puts 30 hours a year on their jet ski. So if the jet ski is 5 years old, I would expect it to have 150 hours.

If that jet ski has under that number, I consider that a win.

If that jet ski has over 40 hours a year, I start looking for other factors to determine if the jet ski is worth it.

Enter the year the jet ski was manufactured and its current hours to calculate if it has a lot, a little, or an okay amount of hours.

How Many Jet Ski Hours Is a Lot?

A common trend I’m seeing when buying and selling jet skis is that most people will sell them before 200 hours and a lot will even sell with under 100 hours on them.

Any jet ski under 100 hours on it is a good buy and still has a long life left in it especially if it’s a 4-stroke.

I’ve made a point in my “5 factors to consider before buying a used jet ski” that hours don’t matter.

I say this because in the years of buying and selling jet skis, I’ve come across so many cases that counter hours being the decisive factor for a jet skis worth.

I’ve seen jet skis with over 300 hours on them do better than a jet ski with 20 hours.

What matters more than hours is how well the jet ski was taken care of.

When someone sees 300 hours on a jet ski they usually think it’s worn out. I instead see a guy who took care of his watercraft so it could last that long.

Someone selling a 10-year-old jet ski with only 20 hours on it I start to question everything. 20 hours tells me they never done much servicing on the PWC if at all. It also tells me either they did not like the machine or something has always been wrong with it.

I’ve seen engines blow at 5 hours and jet skis with so many hours I’m left scratching my head as to how it’s still going.

All I’m trying to say is that hours are not the end all be all thing to determine a jet skis worth. The context of how well the owner took care of the PWC and conditions of things like the seat are way better-determining factors.

I go over this and many more in my ebook here. Enter “hours” at checkout for 50% off.

Should You Buy a Jet Ski over 300 Hours?

It’s not like as soon as you hit 300 hours the jet ski won’t work anymore. But you should still be cautious of a watercraft that has that many hours, especially when it’s over 10 years old.

All manufacturers make their jet skis to last 10 years, and at 30 hours a year, that is 300 hours.

Would I still buy a jet ski with 300 hours on it? Maybe, it depends on how well they took care of the PWC. Another thing that would affect it is what kind of watercraft it is?

If it’s a Recreation Watercraft like a Yamaha VX or Sea-Doo GTI, I would consider it over any musclecraft.

At the end of the day, I would be open to the idea of a 300 or more hour jet ski so long as nothing is majorly wrong with it. But I would also understand this thing is not going to last another 10 years and would consider it disposable. This is not a bad thing if it’s your first watercraft, something used and broke in is a great way to get into the sport.

Don’t Forget the Manufacturer or Lack Of

There was a time when you could get a Honda, Wetbike, Polaris, Tigershark or Arctic Cat. You can’t get these jet skis anymore and no matter there hours you should avoid them.

Not because they’re bad machines, but the manufacturer doesn’t make parts for them anymore. The aftermarket stock parts is not a thing for jet skis so you can’t go to your local parts store and get an aftermarket replacement.

On top of that jet ski manufacturers only make their watercraft to last for 10 years. When I say last, that is the number they shoot for, but they’re not surprised if they go over that easily. But this does mean that is the cut off time for many of the parts they make. If the manufacturer is not making replacement parts, it makes fixing a jet ski harder if something breaks.

The good news is that jet ski manufacturers don’t change big things that often. Components like the engine or pump, the two most important things have been around for a long time for most of these manufacturers. For example, Sea-Doo still uses the same 155HP engine block they released back in 2002.

But that plastic decorative piece on the hood from 2002 is more than likely not around anymore. The general cosmetic things like replacement seat covers do have a thriving aftermarket supply even for stuff that goes back to the ’90s. Just don’t expect to be able to get that one GTX 4-Tec decal on the bottom left of the hood for your 2003 GTX.

How To Find The Hours on a Jet Ski

Figuring out the jet ski hours is super easy. In the 90’s many jet skis never had an hour meter on them but those are all 2-strokes, and I don’t recommend buying anything that old.

Your modern 4-Stroke jet skis will have hours either displayed on the gauge as soon as you put the key on or reveal when you press the Mode button. The button is usually located next to the gauge, or on the handlebars or right below the handlebars next to the glovebox.

Tip: The hours on the gauge can lie… well, the owner can. Some bad people will buy a new gauge to “reset” the hours to make their watercraft seem newer than it is. So if the hours seem too good to be true, then they just might be. The good news is that the hours for your jet ski is not only stored in the gauge but in other places of the PWC. To get the accurate hours of the watercraft, you’ll need to take it to a dealership and have them read the jet ski’s computer.

How Are Jet Ski Hours Counted?

When the jet ski’s engine is on the hour meter is counting. What you see for hours is engine hours and nothing else.

Even when idling the hours are being counted so it’s best to turn the engine off when you have docked. Not only should you do that to save on hours but it’s not smart to leave the engine running on your jet ski if you’re not riding it.

When it comes to jet ski hours, the best thing they’re good for is telling when you need to service the PWC.

When you get a new jet ski, you’ll want to break the engine in and take it really easy for the first 5 hours. Then you need to get your first service done, which is anywhere from 10 hours to 50 hours depending on your manufacturer.

From that point, you’ll want to get it serviced every 25 to 50 hours depending on your manufacturer. Or once a year if you never reach those numbers.

Your modern jet skis have service timers built in just like cars. So you’ll get the alerts for service for when they’re due. But for older watercraft, you’ll have to pay attention to the jet ski hour meter to know when you need to service them.

On top of that specific components like the supercharger needs servicing every 100 or 200 hours.

Every manufacturer and model is different but your owners manual will tell you what components need to be replaced at certain hours.

Can I Use the Jet Ski Hour Meter as a Gas Gauge?

Never use the jet ski hour meter as a gas gauge.

In a span of an hour, you can use more gas if you’re blasting around then you would cruising.

I know some people use the miles on their car to determine when they should fill up, but jet skis are not as predictable on gas.