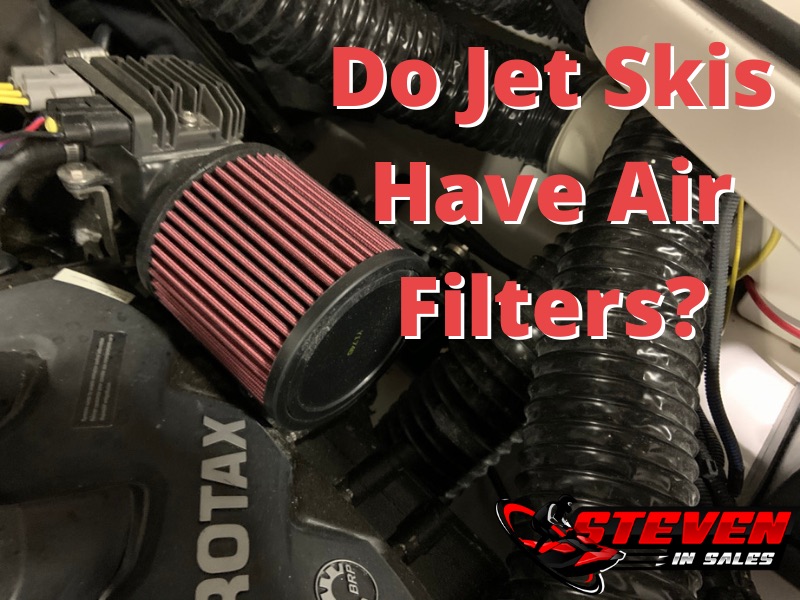 It may come as a surprise to many jet ski owners to find out that many jet skis do not have air filters.

There are a few jet skis with air filters, for a unique reason, but a lot do not have them. The jet skis without air filters don’t need them as it’s not that dusty on the water.

Do Jet Skis Have Air Filters?

A jet ski doesn’t need an air filter as there is not much dust and dirt while on the water. If your jet ski came with an air filter, it’s best you keep it on as that is how the manufacturer designed it to run.

The reason jet skis don’t often have an air filter is because they don’t need one – There is not much dust and dirt when on the water.

If your jet ski came with an air filter, it will need it to run, as that is what the engine was design to run with.

If your jet ski did not come with an air filter, then you don’t need to add one.

What Jet Skis Have Air Filters?

I say Sea-Doo rarely has any air filters because the company Rotax, who makes the Sea-Doo PWC engines and is owned by BRP who also owns Sea-Doo, will have air filters put on jet boats. Jet boats use the same engines found in Sea-Doo PWCs, but they may have an air filter added. The picture at the very top of this post is a Jet Boat with a Rotax engine with an air filter attached.

The Sea-Doo will for sure have a flame-arrestor, but that is not an air filter and not something you need to mess with.

The reason why other manufacturers have air filters is because their engines are marinized motorcycle engines. This is not a bad thing, but the engines were built for motorcycles first and then retrofitted for watercraft, which are just motorcycles of the water.

Where Do Jet Skis Take In Air?

A jet ski will take in air mostly around the seat or around the gauge console. There isn’t a perfect seal around all the plastics, so air does find a way into the hull.

If you look inside your jet ski you’ll see black tubes either from the seat or around the front console that are used to guide air in. The tubes often go to the floor of the hull to keep water from dumping in too quickly if you flip the jet ski, when upside down the lowest point of a jet ski becomes the highest point.

The PWC’s air box is most often located at the front of the watercraft so that it can take in cooler air. Though, it’s not uncommon for some Yamaha’s to have the air box on top or directly in front of the engine.

The air box is design to cut down on noise and to help keep water out. Getting water in the engine of a jet ski is very bad.

Why Do Some Jet Boats Have Air Filters?

Since jet boats use the same engines as jet skis, then why do they get air filters and jet skis don’t?

If your jet boat came with an air filter, you need to keep the air filter on it as its tune to run with it on. Will it run worse without the air filter? More than likely no, but it can affect warranty.

Another reason why jet boats have an air filter is to cut down on noise – Jet boats tend to be much louder than similar boats.

Since it’s not that dusty on the water many boats air filters don’t get that dirty, especially after using it for years. So changing your air filter is not something you always need to do when you do a service on your boat or jet ski. It may never look dirty, but it won’t hurt to change it at least every 3 to 5 years as the fibers of the filter do break down over time.

Do Air Filters Rob You Of Power?

Any restriction of airflow will rob your engine of power, and this goes for the air filter too.

But the manufacturers of jet skis with air filters have design that restriction of airflow in mind, so it’s best to keep the air filter on your jet ski.

How Often Should You Change Your Jet Ski Air Filter?

If your jet ski came with an air filter, the manufacturer often recommends changing it every year.

The honest truth is that most people never change them, as they never get too dirty.