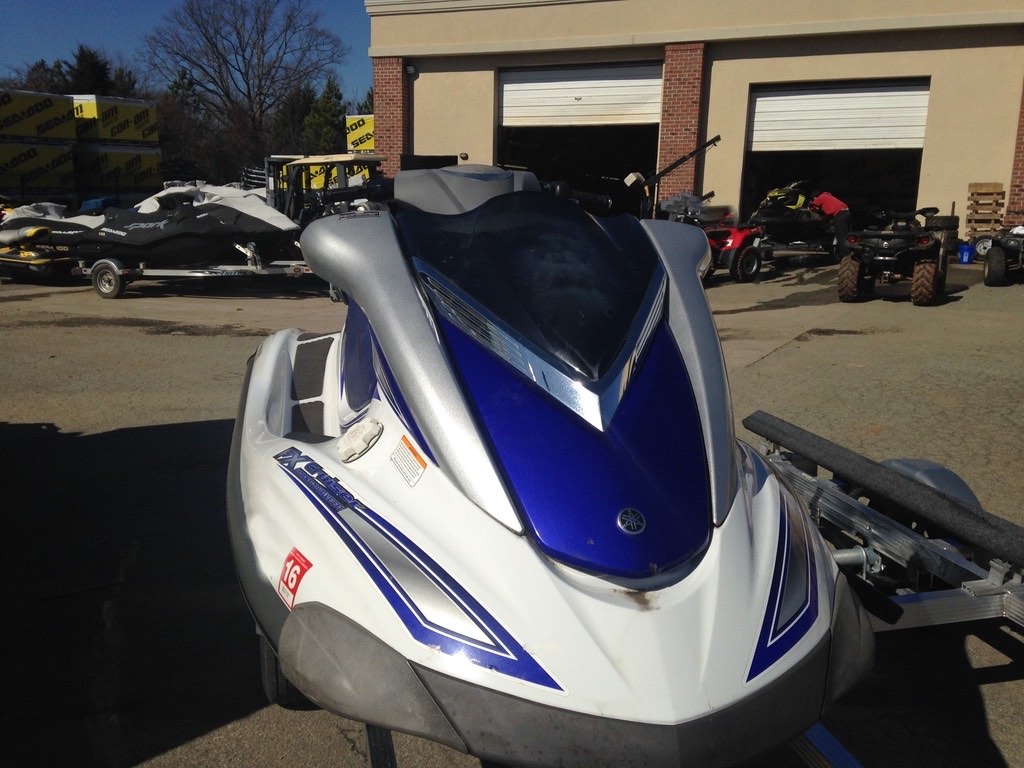 It’s not uncommon for someone to buy two jet skis and get a double jet ski trailer to haul both around.

There will come a point where they only need to haul one of the two jet skis and the only trailer they have is a double trailer. This brings up the question if it’s safe to haul one jet ski on a double jet ski trailer.

You can tow a single jet ski on a double jet ski trailer just fine, and you won’t notice much of a difference either. But there are a few things to keep in mind like strapping it down, wear on tires, and a few more key points we’ll talk about in this post.

Before we go too deep in this post I feel I need to clear up the lingo.

They do make and sell 4-place jet ski trailer that holds 4 jet skis. A 3-place does exist but more rare to find, some just end up making custom trailers to fit that niche.

How To Tow One Jet Ski On A Double Trailer?

Towing one jet ski on a double trailer is no different from towing two jet skis on the same trailer.

I know a few people that like to put the jet ski in the middle of the double trailer, but don’t do that. You don’t have any bow stoppers and the trailer is not built to support the weight that way.

The most important thing about towing any jet ski on a trailer, especially if it’s one jet ski on a double, is that you tie it down. You need to have the bow latch hooked up and trailer straps on the rear.

Jet skis can weigh anywhere from 400 pounds up to a little over 1,000 pounds. So, it’s best to stick with straps that can hold about 1,000 pounds (Amazon Link Ad). One tip I can give is to put two straps on the rear of each jet ski, especially if you’re going far. Having two straps per jet ski rear disperses the load to each strap and if one breaks you still have the other.

Will The Jet Ski Trailer Be Unbalanced With A Jet Ski On One Side?

With one jet ski on one side of the double trailer, you would think it would be unbalanced, but it’s not.

All the weight is still supported by the two wheels, and going over any bumps won’t be any different.

If you ever get in the position for the jet ski trailer to flip, you were already screwed, no matter if you had one or two jet skis on the trailer.

How Far Can You Tow A Single Jet Ski On A Double Trailer?

I’ve personally towed a single jet ski on a double jet ski trailer for several hundred miles with no issues. Try to avoid the potholes and dips in the road the best you can, but you should be doing that any way even if you had two jet skis on the trailer.

You still need to do your pre-check of the trailer like checking the air pressure in the tires, wear and tear, grease the bearings, check straps, and so on.

Straps are what keeps the jet ski on the trailer and makes it one with the trailer. If the strap is missing, the jet ski bounces around and could fall off if the road is bumpy enough. The bouncing could also cause damage to the hull over time, so it’s important you strap the front and rear of your jet ski down when towing on your trailer.

How Fast Should You Tow The Jet Ski Trailer?

I don’t exceed over 65MPH when towing a jet ski on any trailer.

Most jet ski trailers don’t do well at speeds over 80MPH, and I would not even get close to that.

I’ve also learned to keep my distance from others who are towing jet skis or boat trailers because many of them don’t take care of the trailers. It’s amazing how many of those trailers have dry rotted tires and the axles haven’t been greased in years. Boat trailers are more neglected than the boats themselves, so I’ve learned not to hang around them while on the interstate.

Why Buy A Double Trailer If You Only Have One Jet Ski?

I know a few people may wonder why someone would buy a double trailer if they only have one jet ski?

A common trend for many people is that they only have the money for one jet ski right now but want another one in the future. So they buy the double trailer now to get it out of the way. This is very smart to do as double trailers always go up in price every year and hold their value way better than single jet ski trailers.

Any Negatives With Towing A Single Jet Ski On A Double?

There is one negative with towing one jet ski on a two-place jet ski trailer and that is tire wear.

You should swap sides every so often to get even wear on your trailer tires. Uneven wear will lead to one tire blowing faster than the other and causing many issues.

So if you take the jet ski to the ramp on one side you should take it back home on the other side.

Swapping will also help with the wear on your bunks and bow straps.

Can You Tow A Double Jet Ski Trailer With A Car?

I suggest you don’t tow 2 jet skis on a double trailer unless they’re Sparks, EX, or standups jet skis.

It’s not so much the going, but the stopping that is the problem. The tow vehicle needs to weigh enough to stop on the steep ramps and pull the wet jet skis out of the water.