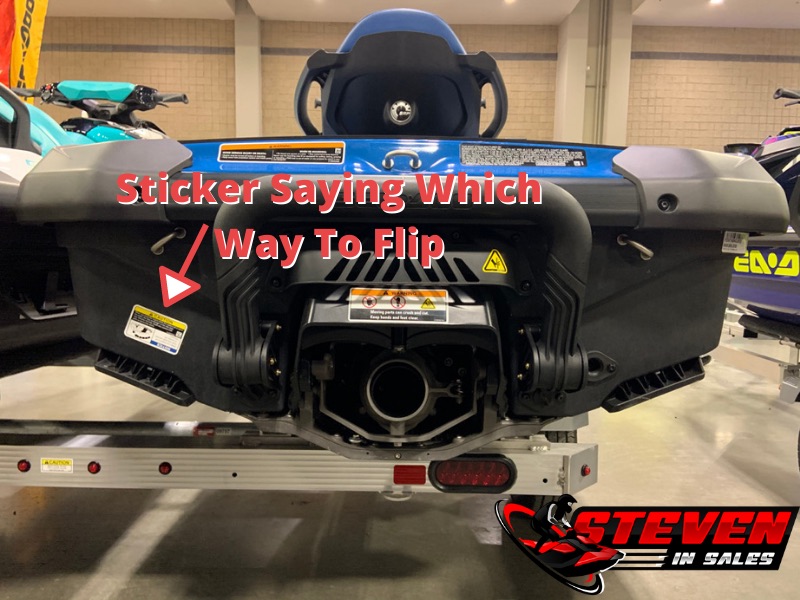 Flipping a jet ski over is not the end of the world.

But there are critical steps you need to follow to make sure you don’t damage your jet ski.

Flipping a 4-stroke jet ski is more of an issue, and since 4-strokes dominate the market nowadays, this article will focus on them instead of 2-strokes.

What Should You Do If You Flip A Jet Ski?

What To Do If Jet Ski Was Submerged?

What To Do If Jet Ski Engine Took On Water?

Do not start your jet ski if the engine has water in it.

You need to get the jet ski to your dealer or local repair shop so they can remove the water. Time is essential, especially if you sunk it in saltwater.

Do not lie to the dealership; tell them the engine is hydrolocked, and they will know what to do.

Going over this speed can force water into the engine, undoubtedly hydro-locking it.

Also, towing too fast can cause the jet ski to bounce around uncontrollably, so it’s best to stay under 20MPH.

Why Is Flipping A Jet Ski Bad?

The reason why flipping a jet ski is bad is that the engine compartment is not sealed. It can’t be as air needs to get in somehow for the engine.

When the jet ski is flipped over, the seats are underwater, and thus water will find its way into the engine compartment.

If water is getting into the engine compartment, then it’s a good chance it will get into the engine itself if there is enough water or if you upright the jet ski the wrong way.

There are two main reasons why getting water in your engine is bad.

When it comes to saltwater you want to get it out soon, within days if not the same day if you can. Lake and river water is more forgiving, but you should still be urgent.

How Can You Tell A Jet Ski Has Been Flipped Before?

Flipping a jet ski is not the end of the world if done correctly.

But many people like to know if a jet ski has been flipped lately when buying a used one. For all you know, they’re selling it because it doesn’t run right after it was flipped.

The best way to know if a jet ski has been flipped is to see how heavy the seat feels.

A jet ski that has been flipped often has a very heavy seat because it’s water-logged. This is one of the many things I look for and go over in my eBook.

Heavy seats are not 100% caused by someone flipping a jet ski; I’ve seen all kinds of things make a jet ski seat waterlogged and heavy. But most often, if the seat was waterlogged, it was because it was flipped.

It’s also near impossible to fully dry a jet ski seat that has become waterlogged. The seat is a giant sponge with vinyl around it. The sponge soaks up the water, and the vinyl keeps it trapped.

Is It Easy To Flip A Jet Ski?

Most 4-stroke jet skis are hard to flip.

Modern jet skis are heavy, and many will have difficulty trying to flip one on purpose. You’ll need to have a lot of people or be over the weight limit before the jet ski feels like it will flip over.

It will be a different story for the Rec-Lite category of jet skis, the Sea-Doo Spark, and Yamaha EX models.

The Rec-Lite watercraft are more tippy and more playful, for sure. So if you buy smaller jet skis like from the Rec-Lite category, make sure you’re aware of what to do when you flip one.

Do Jet Ski Engines Shut Off When They’re Flipped?

4-stroke jet skis have a switch that kills the engine when it’s been flipped over.

2-stroke jet skis don’t always have a switch, so be careful.

No matter the watercraft, make sure the engine is off before you go reaching to flip the jet ski over.

Bilge pumps are not standard for jet skis; it’s often an upsell or only for a few models.

Jet skis do come with what are called bailer tubes that work similarly but use the jet pump to create the suction. A small hole in the jet pump produces a vacuum and leads into the hull to suck out any water in the hull.

The downside with bailer tubes is that they don’t work unless the engine is on.

You can always add a bilge pump to your jet ski; it is nice to have. However, installing a bilge pump will require you to drill a nice size hole into your jet ski along with wiring it up. I wouldn’t say it’s hard, but it’s not for the faint of heart.

How Much Does It Cost To Fix A Hydrolocked Jet Ski?

Removing water from a jet ski engine can cost anywhere from $500 to $3,000 depending on the damage. It could even go for more if you really damage the engine.

You’ll need to be upfront with the dealership that you hydrolocked the engine. Do not tell the repair shop that it “doesn’t start”; please tell them right away it’s hydro locked.

They’ll remove the water from the intake and cylinders and anywhere else that needs it.

The next thing they’ll do is multiple oil changes.

Water in the oil can damage an engine over time, so it’s best they get it all out. The problem is that the water can hang around, so multiple oil changes will be needed.

The multiple oil changes are what make this a costly repair. You could be fortunate and 2 oil changes and you’re done, or it could be 4 if not more.

If you flipped your jet ski and, for some reason, did not flip it back over correctly or fast enough, you may wonder if it will completely sink?

Jet skis don’t completely sink even when full of water.

When you look inside your jet ski, you may notice styrofoam, especially towards the nose of the PWC.

This styrofoam is there for the off chance your jet ski sinks; the styrofoam will keep the nose afloat just enough.

It is a sight to see a boat towing company bringing in a jet ski that has sunk with just the nose sticking up. It also is a fight to get it on a trailer as it will be cumbersome. I’ve only had to do it a couple of times, but I can confirm most jet skis won’t completely sink.

Can A Jet Ski Sink On Land?

I just had to add this section because I’ve seen jet skis sink on land; you didn’t even need to flip them.

While a jet ski sinking on land sounds impossible, it’s not that far-fetched when you think about it.

I’ve seen people leave their jet ski seats off or the hood wide open, and a bad rainstorm comes by, and the jet ski took on water because the drain plugs were in.

You need to make sure your jet ski is covered, this includes keeping the seats on them, and the compartments closed when you store it.

Keeping the cover on the jet ski when you’re not using it is also a good idea.