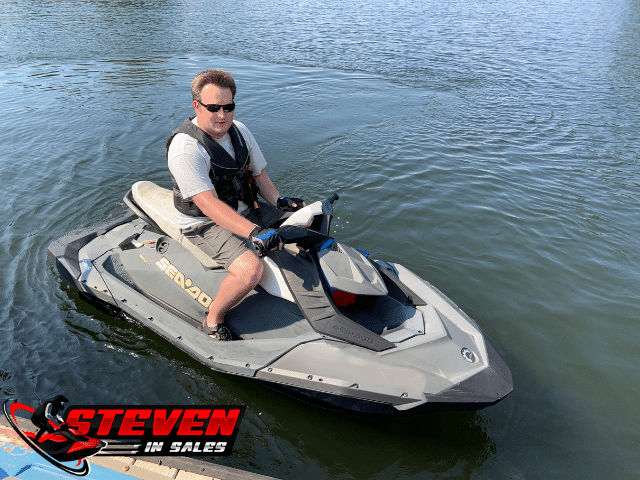 Probably the number one fear of many new jet ski owners is docking, especially on drive up lifts.

Docking a jet ski is easy, but it does require some patience and practice.

In this post, I want to show you how to dock a jet ski, put it on a drive up lift, and tips I’ve learned from teaching many new jet ski owners about docking jet skis.

The number one rule when it comes to docking a jet ski is to go slow. When I say slow, I mean painfully slow, almost like it feels wrong and people are judging how slow you’re going – kind of slow.

The biggest mistake you can make when docking a jet ski is to go fast or to play with the throttle.

When in doubt at the dock, shut the engine off. Hit the START/STOP button if you get in a tight spot or don’t know what to do. Avoid taking the safety lanyard off, just in case you need to quickly restart the engine.

Point one is an important one, a jet drive is always processing water. When doing jet boat test drives, I’ve had several “boat guys” tell me that shutting the engine off while at the dock is stupid. Their logic is true for normal boats with a true neutral, but not with jet boats that lack a true neutral. The only time you can rest with a jet drive is when the engine is off. This is the trade-off with jet drives, you have far more control when docking because you’re always processing water, but you also must kill the engine when docked.

How To Dock A Jet Ski

If you’re ever in doubt, shut the engine off. Jet skis don’t have a true neutral, and the only way to stop everything is to kill the engine.

A video to show you how to drive a jet ski and what I mean about going back and forth on the levers:

Docking A Jet Ski Without Reverse

Docking a jet ski without reverse is harder, but doable.

The trick with docking a jet ski with no reverse is to not use any throttle at the dock or no-wake area and, 20 feet before the dock, spin in a circle.

To get better at docking your jet ski, you need to practice!

The best way to practice is to find a buoy out in the water and try to get as close to it without touching it. I like using the no-wake buoy, as there are a few near docks, and it’s probably the safest area, as people should be going slow there anyway.

Tapping the throttle and reverse levers, try different approaches until you start to get the hang of it. Remember, go slow, only idle speed. Do this a few times, and you’ll be an expert on docking jet skis in no time.

Every jet ski manufacturer suggest you keep your jet ski on a lift and not in the water when not in use.

One lift type, the floating drive-up one, as the name suggest, you drive your jet ski directly on top of it. This lift is very intimidating to many jet ski owners, but it’s the best lift you can buy for your jet ski.

They also make ones that lift in the air, which is fine if your dock needs that, but the drive up ones are so much better and less tricky. The ones you lift in the air need to be centered and take forever to lift you out of the water.

Putting a jet ski on a floating drive up lift is nearly the same as docking on any boat dock.

A lot of new jet ski owners are afraid they’ll overshoot the lift and end up on their dock and damage something. So long as you go slow, lightly touch the lift and keep it straight you should not over shoot it when giving it a little bit of gas.

It may require a few tries to get used to it and find how much gas you should give it, but you’ll get the hang of it. This is why you want to wait before turning the engine off to make sure you won’t roll back off and have to do it again.

If you’re going at idle speed, the jet ski will steer just fine if you move the handlebars. It will even steer while in neutral, jet skis give you a lot of control around the docks.

When at the no-wake area or about to dock, you should be at idle speed, and you need to avoid giving the jet ski any throttle beyond the light tap to put you in forward. Giving the jet ski throttle around the dock is a recipe for disaster, it should only be used as a last ditch effort to reverse quickly out of a bad spot.