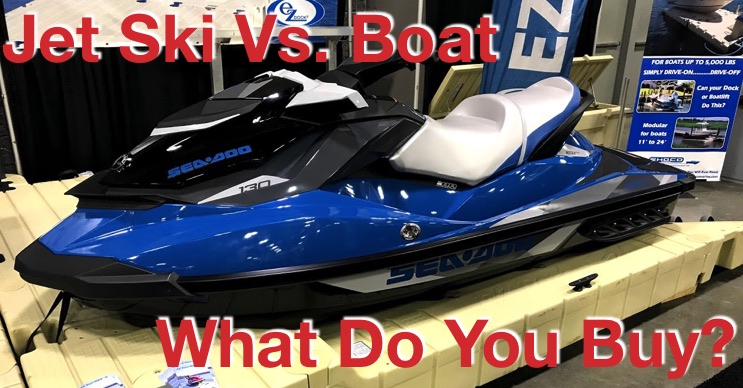 As someone who sold both jet skis and boats, I would get asked the “jet ski vs. boat” question all the time.

Over the years of hearing what people need and what suits them the best I have found the answer – and it might surprise you!

Buy A Jet Ski Over A Boat!

I’m not going to leave you hanging; you should buy a jet ski over a boat.

Simple, I’ve learned that the only people who asked me this question never owned either. This is someone new to jet skis and boating, and of the two a jet ski is a way easier for a beginner.

A boat is not a simple thing while a jet ski is get on and have fun kind of thing. Let me explain.

I’ve had to train many people on how to drive both jet skis and boats, and I’ve found people take to jet skis like a fish to water.

After a few minutes of practice, they get how the wind affects your docking and other little nuances. It’s so easy compared to a boat that many people forget they even have a owners manual to their PWC.

I have a post on how to drive a jet ski here so you can see how it easy it can be.

Get The Jet Ski First

Once you have gotten used to jet skis and the way the water works, it’ll be nothing to get a boat later in life.

Moving from a jet ski to a boat is a much more logical approach than going to a boat and later regretting not getting a jet ski.

Plus, you’ll find a jet ski is a lot easier to sell than a boat. Who knows, a year later you find out boating is not your thing or a sudden life event changes everything. It would be way easier to get rid of a jet ski then a boat.

Jet Skis Are Cheaper Then Boats

Sure, jet skis cost can reach close to $20K, but it’s still cheaper than a boat. And if you could find a boat for under $20K it wouldn’t be anywhere near the reliability and coolness than a similarly priced jet ski.

If you’re new to the sport, the last thing you want to buy is a troubled cheap boat that turns you off from boating.

It would be better to start small with a jet ski, learn the ropes, and then upgrade after you have confirmed boating is for you.

Jet skis don’t have any exposed impellers as a boat would. Yes, those spinning blades of death are tucked away inside a jet ski.

I still recommend turning the jet ski engine off before you get near the jet pump. Also, keep your fingers and limbs away from the impeller too.

Since there are no exposed impellers on a jet ski, I find myself using that over a boat for pull sports like tubing. You still have to worry about sucking up the rope, but I have a guide on that and how to stop it here.

Here is an interesting fact. A jet ski doesn’t have a “transmission” like a car, or a boat would have. If the engine is on the impeller is moving. What controls the thrust is a bucket, yes a simple little bucket in the rear. This bucket directs where the water goes, thus you move.

A boat’s transmission has gears. Gears need maintenance and extra upkeep. These gears also wear out and make a thud sound when shifting them (very offputting for a new boater to hear but it’s normal). What you’re doing is forcing a spinning engine to flip over a gear to redirect which way the propeller is spinning. This is far more complex than a simple jet ski bucket.

Not only that but boats have more moving parts. It’s common to see a boat engine based off a “truck engine” that is adapted to the water-world. And just like a truck, you have belts and many other things that need to be replaced every so often.

A jet ski engine is simple; one could argue it’s only slightly more complicated than a lawn mower engine. There are no exposed rubber belts like a boat engine would have – everything is self-contained. Jet Skis will even have fewer cylinders and spark plugs to worry about too.

Since the jet ski engine is smaller and easier to get to, you’ll find servicing cheaper and more accessible. As someone who worked around technicians that serviced both jet skis and boats, they all rather work on a jet ski over.

Other expenses will be cheaper on a jet ski too like gas, insurance, towing if you need it, and many other factors.

Jet Skis Are Easier To Clean

I had to give cleaning a jet ski vs. cleaning a boat it’s own section.

Cleaning a jet ski is far easier than cleaning a boat. You have fewer crevices to clean, and boats are super awkward to clean with taking all its seats out and carpet – it’s a whole ordeal.

The worst cleaning is when getting ready for the season. A boat is a giant bucket that collects leaves and other gunk that falls into it (even if you have a cover on it). The rain still finds a way under your cover, and your carpet starts to smell like mold. It’s an all weekend event to clean.

Let’s not forget the after-ride cleaning that your friends tend to magically disappear for.

Compared to cleaning a jet ski, at most a quick pressure wash and you’re good to go. Even a simple soapy bath is a 15-minute job at the most.

I don’t know about you, but I rather spend my time on the water and not cleaning a boat.

You just got home from work, and the kids want to go on the water before the day ends.

This is not an easy thing to do on a boat. If you have a jet ski, you hop on and go — no need to think about it.

Even the people that have both a boat and a jet ski find themselves using the jet ski more because the boat is too much to get ready. The most common feedback I get from owners is that you have to plan a day beforehand when you want to take the boat out. Planning is something you do at work, not something you want to do on your day off.

It’s like a boat is a bus and a jet ski is a car, which one would you rather hop in to get a simple errand done?

Yes, you read that right.

With Sea-Doo and now Yamaha you can get a watercraft with brakes. This is something you don’t get on a boat.

Not only does this make docking easier, but it gives you better control too. If someone pulls out in front of your watercraft you can stop, unlike a boat.

Jet Skis Are Easier To Store

I store my Sea-Doo Spark out behind a small corner of my shed. Could I fit a boat there? No, but more importantly, I couldn’t get a boat and the towing vehicle back there.

I can put my jet ski anywhere that it’ll fit because it’s so small. Not only that, but I can also physically move the single jet ski by myself without needing to hook up to a truck.

If I didn’t have this spot to store my jet ski, I would still have more options available to me to keep it because of its size.

Since jet skis are so small, there is always room for them at the sand bars or docks. Boats take up a lot of room, and you often get the angry look from other boats if you take too long at the docks. With a jet ski, if the dock looks full, I still have the option to carefully beach it instead. Beaching a boat is not ideal due to its size.

With a boat on a busy weekend, it can feel like parking a bus in a busy parking lot. Stress like this is not what I look for when I’m enjoying my time on the water.

Jet Skis Are Easier To Tow

For many people, this could be their first time towing something. Trust me, from experience it’s better to learn to pull something small than something big.

And if you can master backing a jet ski trailer down a boat ramp, you’ll have no issue backing up any trailer.

Another thing to consider is your vehicle. Make sure your vehicle can tow the boat or jet ski you want. This could mean purchasing a truck or continually having to rent one.

With a jet ski, I’ve had people tow a Sea-Doo Spark with a Toyota Prius or Ford Mustang and have no issue.

To learn more about towing and jet ski weight I have a post on that here.

The Downsides of Jet Skis

I can’t go without pointing out the negatives of owning a jet ski compared to a boat.

The biggest one I’ve found is that you can’t drive a jet ski at night.

And no, you can’t add Nav lights to a jet ski. It’s a length requirement to have navigation lights for night driving and it just so happens all jet skis miss it by a few. I’ve had people try to add the lights, but still, the water patrol has a hard no if you craft even looks like a jet ski so don’t do it.

The other downside is that you can only carry 3 people at the most. And that number does get a little funky as I talk about in this post here.

Is this really a downside? For me, not really. The best boat I ever owned was the one my friend owned. Haha! Yes, I’m that guy, but I’m also the guy with a jet ski. With our powers combined, it makes for a great all around time for everyone. Maybe you could have a similar situation and get the best of both worlds.

I’m not saying you should get both a jet ski and a boat.

But what if you could combine the two? Well, you can, and it’s called a Jet Boat.

Both Scarab and Yamaha have their own Jet Boats. They use the engine from a jet ski, so it’s simple and still very powerful.

No exposed prop on a Jet Boat as they use the same drive system that a jet ski uses. Plenty of room like a boat would have with some of them having a toilet/sink/changing room.

Scarab even uses Sea-Doo engines, so they have closed-loop cooling, which means the engine never takes in lake or ocean water to cool it. No salty lake water corroding things and no debris to clog the cooling! You usually have to pay extra for this on other boats, but it’s standard on Scarab Jet Boats.

This is the few times in life where you can have your cake and eat it too. Why not take a look at Jet Boats!