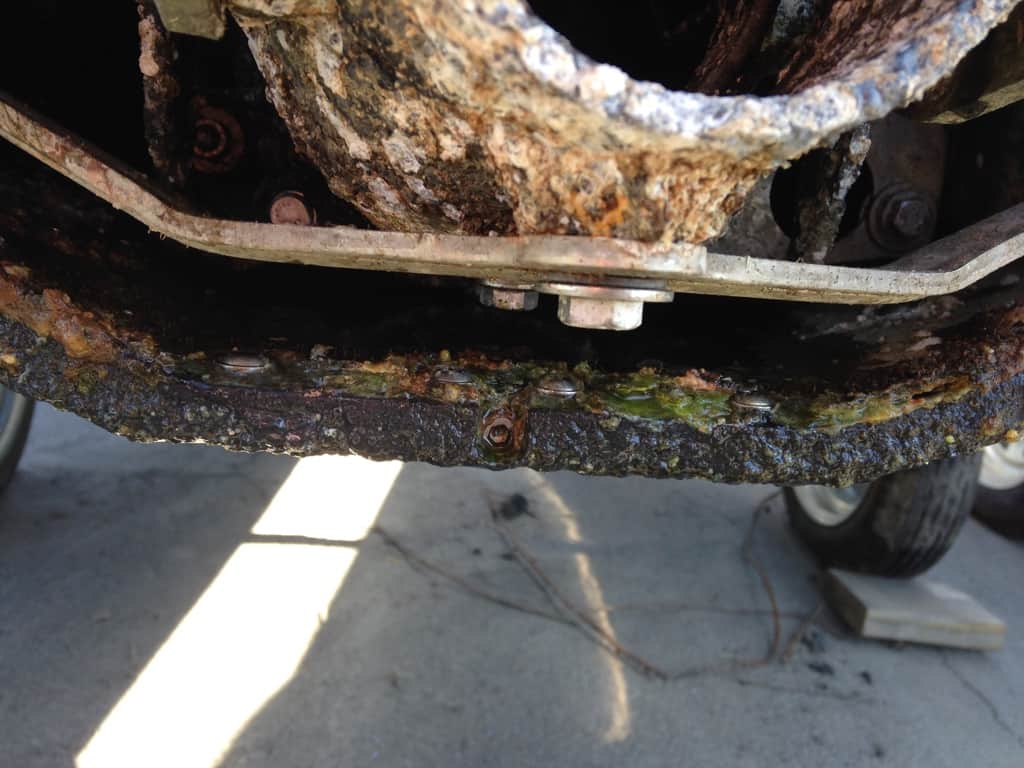 Can you leave your jet ski in the water? You can, but it’s not recommended. If you check your owner’s manual, you’ll even see that the manufacturer doesn’t recommend it.

Where you keep your jet ski is the real concern. If you keep the ski in saltwater then you don’t want to keep it in there for too long.

I personally won’t leave my jet ski in saltwater for even a couple of days; the saltwater can corrode things fast.

If it’s freshwater like a lake, I’ve been known to keep my ski in the water for a week or two. Freshwater lacks many of the strong minerals like salt that can corrode metal components and destroy your watercraft.

But you’re not entirely safe when in freshwater. Components still corrode in freshwater (just slower), and you still have things to worry about like the scum that builds on the bottom of the boat.

To give you an idea of why you should not leave your jet ski in the water 24/7 even if it’s freshwater is to look at the image at the top. That ski was left in freshwater non-stop and you can see all the corrosion and scum that built upon it. It’s so bad that the green anti-freeze is leaking out of it because it is so corroded.

It’s fine to leave your jet ski in freshwater for a few days. I would recommend checking on it every day or more to see if it’s taking on water. I know that can be overkill but if it’s the first time in the water it’s better to be safe than sorry with your watercraft.

The way you can check to see if it’s taking on water is to lift the seats off. It’s normal to see some water in the hull, but when you have about 2 inches or more of water in the bottom of the hull, then you have issues. I have a post here that talks about what to do if your jet ski is sinking.

Running to the gas station or getting something to eat is not a big deal and it will be fine to keep the ski in the water for that. It’s when you go weeks that it becomes an issue.

If you keep it in saltwater you have an even shorter time frame; I would avoid keeping a jet ski in saltwater even for a few days.

For long-term storage, you need to keep your jet ski out of the water. The best ways to go about this is to get a Drive Up Lift, Electric Lift, Dry Dock It at a Marina, or keep it on a trailer out of the water.

My personal favorite is a drive-up lift, here is a video showing you how they work….

Besides corrosion, the other reason to keep your watercraft out of the water is Nature. Some lakes have muskrats that like to eat significant parts of watercraft that help keep it afloat. With the craft in the water, this makes it easy to eat away. It can be rare that they go after boats, but it does happen.

Another reason is storms. One massive storm can trash your jet ski and crash it into your dock. Or even worse the dock lines holding it can break and the jet ski could end up crashing into rocky shore. I’ve seen this happen many times before.

I’ve even seen dock lines break and the ski drift away and never seen again or crash into a neighbor’s dock causing damage. It’s best not to risk it.

Let’s not forget the scum that builds under the jet ski too. Barnacles and other nasty stuff will start to stick to the bottom of the watercraft. This can slow it down and make it stink too.

You’ll also have to worry about this scum finding its way inside the jet ski’s cooling system. They can even build up so much that it can block the cooling system and cause the ski to overheat.

One more point, if you have fiberglass damage under your jet ski it’s very important to not keep it in the water. Water can get into that damage and expand the fiberglass and make things worse for you.

One thing no one ever thinks about is theft. If your ski is sitting in the water with only one or two lines holding it to the dock, then it’s nothing for someone to steal.

All they got to do is connect the front hook and cut your lines, and they have a new ski. If you kept it on a floating dock, you could have used a lock as we mention in this post here to keep them from stealing it.

If you do plan on keeping the craft in freshwater for a few days, then I recommend you look into getting a bilge pump. Get one that has a float or an automatic setting when it sees water.

If you can, look into a way to keep the battery charged. I have a great post on that here and talk about what you can do if you don’t have a place to “plug in” a battery charger.

I wouldn’t say install a bilge pump is “hard”, but it’s not the easiest thing in the world. Probably the hardest part is creating the exit port for the water flow out and then all you go to do is run the power wires to the battery.  You can a bilge pump like the Seaflo Automatic Submersible Boat Bilge Water Pump here (Amazon Link Ad). I would also recommend getting the hoses to go along with it too. YouTube has many installation videos here.

Most watercraft will have what is called bailer tubes. These things suck out water if water ever comes in the hull. The problem with these bailer tubes is that they only work if the engine is on.

The way they work is cool and so simple. The bailer tubes are long tubes that come from the pump then up to a high point and then back down to the bottom of the hull. When the engine is on this creates a vacuum from the pump, and it sucks the water out like a straw. The reason why it goes up to a high point is to keep water from coming in. Some of these tubes even have a one-way valve to keep water from coming in too.

But like I said, these tubes only work if the engine is on and do you no good if the ski is sitting. So if you plan on keeping the ski in freshwater for a too long then look into getting a bilge pump like we mentioned above.

Besides all the stuff we talked about above, a good reason to not leave the watercraft in the water for long-term storage is that of winter. During the winter you need to get the craft out of the water and winterize it.

Winterizing your jet ski is very important to do if you live somewhere that gets below freezing. Not winterizing your ski when it gets cold could damage the engine or exhaust system.

9 thoughts on “Can You Leave Your Jet Ski in the Water?”