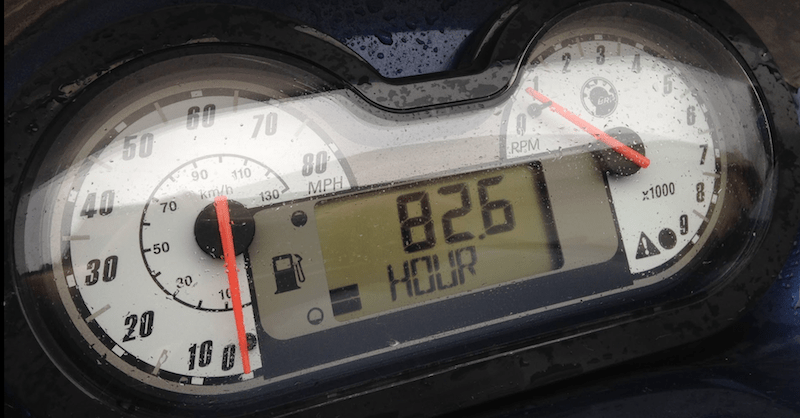 Then we have some ideas as to what could be the problem below.

One of the most common things for a jet ski not wanting to take off is from sucking something up. You might not even realize you sucked something up most of the time as the engine is so powerful that it will blow the debris right out of the pump without skipping a beat.

Other times you’ll notice you’ll suck something up by the sound it makes, or the craft shakes violently. If the jet ski is shaking when you’re trying to take off or just lacks power at take-off, then it’s a good chance you sucked something up.

If you’re on a Sea-Doo, you’ll damage the wear ring as it cuts a groove into it. If you want to learn more about the wear ring, I have a post on it here.

A jet ski with a damaged wear ring will feel like it’s slipping when you give it gas or it feels like it’s not wanting to catch.

What Can Damage a Wear Ring or Pump?

The things that can damage a wear ring or pump is sand, rocks, and anything that is in the water. I’ve even seen someone suck up a map of the lake before.

If the next question you have is “why don’t they put a grate in from of the intake to block such debris” then I have a post here that you should read.

Then there is the off chance that your pump on your watercraft is not making a perfect seal to the body.

When this happens, it just starts sucking air, and it will be slow to take off. This is rare to happen and doesn’t usually happen on its own. It happens when the pump is not put together correctly, which is super rare. This whole pump not lining up is so rare I was not going to put it in.

Another oddity but does have a greater chance of happening is a spinning wear ring. The wear ring fits super tight in the housing and the tolerances between it and the impeller are super tight – it’s got to be if you want proper thrust. Sometimes the wear ring will start to spin and make things all crazy.

The bad news is many of this stuff listed above will require a dealership or a repair shop to fix.

Anything that deals with the pump should be done on dry land by a professional, especially if you have iBR or RIDE on your watercraft as those make it a little harder to get to the pump.

Sometimes you can get lucky with rope sucked in, but don’t flip it and don’t remove the intake grate. Also, you can NOT get to the pump from the inside of the engine compartment. If you don’t know what you’re doing let someone who does do it.

If you have a 2-Stroke, then it could be a clogged carburetor. This is common if you had the watercraft sit for a couple of months. A clogged carburetor will struggle to run, not want to run, or not start at all.

Another one could be the fuel lines are rotting away. The way you check that is by turning the fuel knob to reserve, and if it runs fine on that then the fuel lines need to be replaced. Note: only 2-Strokes will have a fuel knob.

If you have a 2-stroke, then you should also check out the “engine trouble” section below too.

I’ve seen water get in the gas tank and cause it to run horribly or not want to take off. Sometimes it would even have the jet ski stall out.

Water sometimes gets in the gasoline even at the gas station’s tanks. Your car is less picky about it but a jet ski will complain.

The most common way people get water in the gas is from rainwater. Sometimes they don’t put the gas cap on tightly or the gas jugs they use are stored where water can get to them.

Another point about gas is that it expires quicker than you might think.

If you don’t put a fuel stabilizer (Amazon Link Ad) in the gas after you store it for several months, then the gas goes bad.

Don’t expect to go away for a month or two and the gas to be good. Jet skis are high-performance engines, and they get picky if they don’t have the correct amount of octane in them. You can try some fuel treatment if you suspect it’s bad gas, but if water is in there, you need to get it all out and put fresh gas in.

When it comes to getting the gas out or anything related to gas I recommend taking it to the dealership or repair shop. Gas is DANGEROUS and highly explosive and should be done by a professional.

If you have a high-performance jet ski, one with a supercharger or says “H.O.” then it’s picker about what gas you give it.

Some watercraft will show a check engine light if you run too low of an octane gas in it.

Even if the manufacturers “says” you can run regular I would still put in premium.

Sure it can run on regular, but it doesn’t run well unless you give it the proper juice. It’s like saying someone can run in sandals, sure they can, but they run better in shoes.

You could have a fuel pump going bad or even worse the engine is blown.

A blown engine is rare but more common on 2-Strokes. It’s rarer on modern 4-Strokes unless the engine was just never taken care of or you keep it in a harsh environment like saltwater and never clean it.

If it’s engine trouble, you need to let a professional look at it.

If the watercraft is half full of water, then it’s going to be slow to take off.

Take the seat off and see if any water is in the hull. If you got water in the hull, then it’s time to get it to dry land and let a professional look at it.

This is an interesting one.

It could be that you’re in the wrong mode or using the wrong key. Many jet skis will come with different riding modes or a learning key.

Before you go riding check to see if you have an “L-Key” or “Learning Key” as those will restrict take-off and top speed. Some watercraft even have the learning mode built-in and will have a light turn on saying “L-Mode”.

If you have the correct key, then it could be the driving modes of the watercraft. With so many jet skis getting faster and faster manufacturers have included different driving modes. The default mode is usually a “Touring Mode” which is a slow takeoff. You also have ECO mode which is a slow takeoff and limited speed, but this mode has to be activated by you pressing a button. Only the Touring Mode is the default mode. Locate the Sport Mode button for full power acceleration.

If it’s not the modes and the key says it’s not a slow key, then it could still be the key. If you just bought the PWC from the dealership they could have programmed the keys wrong. Try the other key to make sure they didn’t get them backwards. A tip is that the watercraft will tell you when you first put the key on what type of key you have connected. You want the screen to say “Normal Key” or something along those lines.

You’re starting to see watercraft not come with learning keys from the factory anymore as this was a common problem. You can still get learning keys if you need them for an extra charge but I usually end up making all my keys programmed as fast keys and never tell new riders about sport mode.

Tip: If you’re buying two or more watercraft at a time, ask the dealership to program all your keys alike. This way any of your Sea-Doo keys will start any machine. You have the ability to program 8 keys to each Sea-Doo so if you need extras you have the room. Key programming can only be done by the dealerships or repair shops.

Takes Off, But No Top End

I thought I should add this one just in case.

If the ski is lacking top end, where it takes off just fine but doesn’t go as fast as it used to, then it could be a bad supercharger.

If this is the case and the watercraft does fewer RPMs than normal, then I recommend you stop riding it and take it to a professional. Repairing a supercharger is not easy and should be done by a professional especially if it has blown out.

If the supercharger is blown, then you could have metal pieces in the engine which could be doing more damage, and a professional needs to look at it.

Above all else, take it to a dealership or repair shop. Those guys see this type of stuff all the time and will know right away what your problem could be. Jet skis can be dangerous and if you don’t know what you’re doing let someone who does do it.

8 thoughts on “Jet Ski Won’t Take Off Or Accelerate”