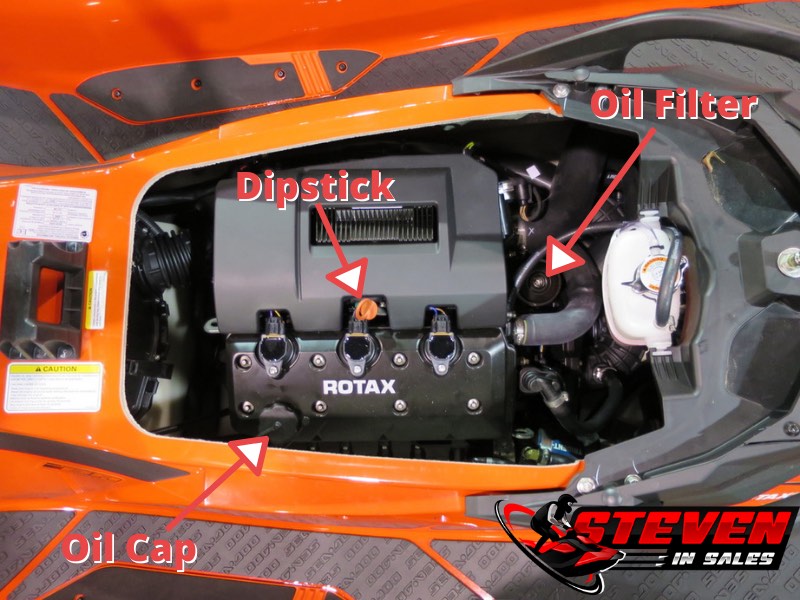 When you look into jet skis, you may come across the words 2-stroke and 4-stroke and wonder what they mean?

Is a 4-stroke better than a 2-stroke, what is even the difference between them and should you care?

In this post, I want to answer these questions and more, while also figuring out if you should get a 2-stroke or 4-stroke jet ski.

What Is A 2-Stroke Jet Ski?

A 2-stroke jet ski refers to the type of engine that is used to power it.

The 2-stroke name comes from how many strokes (down then up) of the piston are needed to perform before combustion.

What makes 2-strokes so unique is how things are simplified. 2-strokes mix the gas and the oil to cut down on parts and to save a step. The piston is lubricated when the air and gas/oil mixed is allowed in, and when the piston goes up it fires to repeat the cycle.

In the process of saving a step, some gas/oil mix can escape through the exhaust. This was one of the biggest reasons why 2-strokes are not popular on jet skis anymore, as the exhaust of jet skis is dumped into the water.

Since the oil is burned with the gas, you don’t change the oil in a 2-stroke, you only add oil. Most 2-stroke jet skis only needed the oil added every few tank fill ups and had their own tank to hold the oil.

What Is A 4-Stroke Jet Ski?

Here is how a 4-stroke engine works.

Since 4-stroke engines don’t mix the oil, they instead recycle it and the oil must be changed every year or every 50 hours, whichever one comes first.

4-strokes have become the most common engine type used by jet skis and most vehicles like your car today.

How To Know If You Have A 2-Stroke or A 4-Stroke Jet Ski?

Only a 4-stroke jet ski will have a dipstick located on the top or near the top of the engine as shown in the picture below.

Sea-Doo first made a 4-stroke jet ski in 2002 and the last 2-stroke ever made by Sea-Doo was 2007. So any Sea-Doo that is 2008 or newer will be a 4-stroke, and any Sea-Doo made before 2002 will be a 2-stroke. Also to note, that every Sea-Doo with a 4-stroke engine also got closed loop cooling too and still holds true today.

Both 2-stroke and 4-stroke each have their advantages but overall, 4-stroke is better and what you find in most jet skis today.

2-strokes are being phased out because they pollute more and don’t last as long as the 4-stroke jet skis.

It’s not all bad things with 2-stroke, here are the pros and cons of both 2-strokes and 4-strokes.

Should You Buy A 2-Stroke Jet Ski?

Since I’ve started this website back in 2014, my stance has been to avoid 2-strokes. It’s even the main point of my what to look for in a used jet ski post.

2-strokes are phased out even more since then, and parts are only getting harder to find.

Unless you like working on your jet skis and can get parts for a used 2-stroke, then it’s not worth it for the average jet ski owner.

Most people want a jet ski that is reliable, lasting, great on gas, comfortable, full of tech, and great for the whole family, and only a 4-stroke can offer all that and then some.

2-stroke jet skis are not a thing you see anymore, and the main reason is due to the EPA.

The EPA started cracking down on jet ski pollution, and 2-stroke were the most polluting.

2-strokes are so bad that many of them will leak as much as 1/3 of its gas and oil mixture into the water. That would be about 3 to 4 gallons of gas being dumped into the water on a 2-hour ride.

2-stroke either needed to change or go away, so they were replaced with 4-strokes. 4-stroke don’t burn the oil, use direct injection to cut down on wasted gas and many have different driving modes to help with pollution.

When 4-strokes started appearing, it was a huge shift for the manufacturers and the dealerships. Retooling needed to be done and a quick relearning by everyone.

Many of the very first 4-stroke engines were not that great, a few needed to be rebuilt after a few hours. It’s just the nature of anything new, and with the rush to move to 4-stroke being placed on manufacturers, it’s to be expected.

This brings up the question, when were the “bugs” worked out of the 4-stroke engines?

If I had to give a solid answer it would be after 2006 that we see all manufacturers just get it right. It’s not to say the 2002 to 2006 4-stroke jet skis are bad, but you can tell the few growing pains many of them had.

The biggest growing pain was the superchargers, and that saga didn’t get better until 2012 for some manufacturers.

The golden engines were the non-supercharged PWCs from 2007 and up. The manufacturers still improve their engines, Sea-Doo came out with the ACE engine block in 2016 which was a nice jump and showed what they’ve learned over the years.