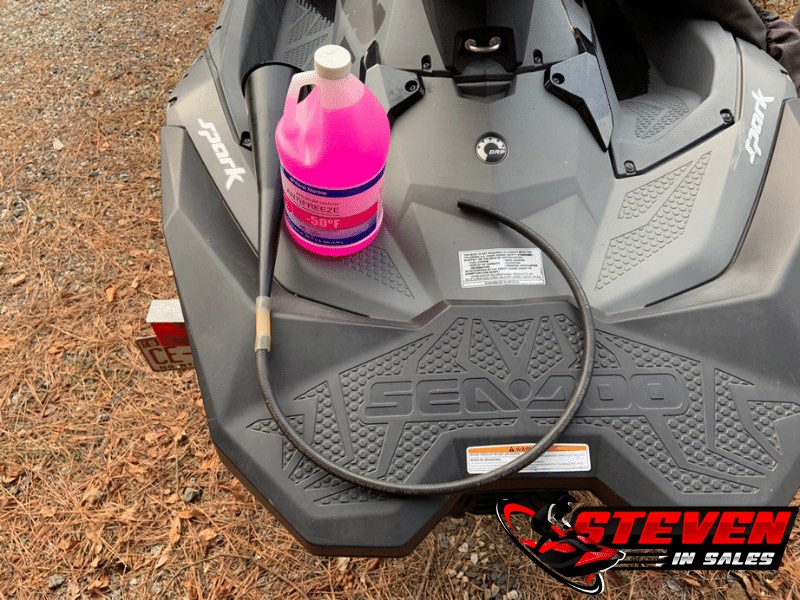 The season is ending, and if it gets below 40F/5C where you live, you should winterize your jet ski.

This guide will show you how to winterize your jet ski, how to de-winterize, and answer the common questions I get about jet ski winterizations.

Supplies You Need To Winterize A PWC

You want to either fill your jet ski gas tank all the way up or keep it nearly empty for winter storage.

You must add the fuel stabilizer before you flush the jet ski, so we know the fuel lines get the mixture too.

I like using a garden hose as Sea-Doo and Kawasaki flushing port is threaded for garden hoses, the picture below shows a Sea-Doo hooked up to a garden hose being flushed with water. When flushing with anti-freeze I use a 5ft garden hose.

Yamaha needs a special flushing adapter as mentioned in the supplies list at the top.

Older Sea-Doo and Kawasaki need a flushing adapter too.

Some models like my Sea-Doo Spark have a small port where you can slide a small hose over, as shown below. Newer Sparks have the threaded for a garden hose adaptor like the bigger units.

Note: Antifreeze is slippery, so don’t flush your jet ski inside your garage or even on your driveway. Do it over the grass or have a catch bucket under the rear of your jet ski to collect the antifreeze. The pink RV & Marine Antifreeze is safe for the environment; that is why we use it.

How To Flush Jet Ski With Antifreeze

The reason you run antifreeze through your jet ski is to replace any water that’s in the engine, exhaust, or intercooler with antifreeze. When water freezes, it expands and can crack metal like your engine, so it’s important you flush with antifreeze.

Important: You must have the engine on when pouring antifreeze. Do NOT flush your jet ski when the engine is off!!!

Once again, do not flush your jet ski with the engine off.

Since your jet ski will be sitting for a few months, it’s best to fog the engine.

To fog your jet ski engine requires you to remove the spark plugs and spray fogging oil into each cylinder for about 3 seconds. Video demo here.

4. Remove Your Battery And Keep It On Charge

A solar battery charger can be used instead if you keep the jet ski outside and don’t want to remove the battery. This is what I do, and my last battery gave me 5 years of service.

Ideally, you should keep the battery out of the weather and somewhere that doesn’t get below freezing.

If you don’t keep your batteries on charge during the winter, you run the risk of them being dead next season. Lead-acid batteries go flat when they’re not used or kept on charge.

You can see our guide here to see what smart battery charger or solar charger you should get.

5. Rinse And Then Lubricate Everything

Take the seats off and unscrew the drain plugs.

Lean the jet ski back to allow water to flow out, and then rinse the inside with your garden hose. This is to get any saltwater and gunk out before we store it.

Let the jet ski sit for a bit to let the water evaporate.

Then take your anti-corrosion spray and coat everything inside the engine compartment, focusing more on the electric components and anything shiny.

Don’t forget to spray the pump area too! Anything that moves needs to be covered in the anti-corrosion spray.

If you have a custom-fitted cover from the manufacturer, put that on the jet ski but also get another cover to go over that for winter storage.

You want a second cover that completely covers your jet ski as I’ve done below.

Small critters like to hide in the exhaust ports of jet skis and even find their way into the storage compartments. However, with a cover that completely covers the jet ski, they can’t get in and hide.

Mice and other little rodents are the worst, and they love the taste of plastic wires and foam, so please get a cover to go over the top of your cover. I know it sounds silly but it’s well worth it having a cover for your cover.

Any general-purpose or universal fitting jet ski cover will do, we have an article about what size to get here.

How To De-Winterize Your Jet Ski

We must not forget to de-winterize your jet ski before the riding season.

How To De-Winterize Your Jet Ski Steps

Note: If you used fogging oil when storing your jet ski, you should for sure replace the spark plugs.

Do You Need To Winterize Your Jet Ski?

If you live somewhere that has temperatures that get below (40F/5C) you need to winterize your jet ski.

If you don’t winterize your jet ski, the water inside the engine, exhaust, and intercooler can expand and crack the metal housing.

A crack in the engine block is not good and can be a very costly repair.

Does My Sea-Doo Need To Be Winterized?

Sea-Doo uses a closed-loop cooling system for the engine, so there is no worry about water freezing and cracking the engine block.

Even if you have a Sea-Doo, you still need to winterize it every year if it gets cold where you live.

Does Revving The Engine Count As Flushing?

Revving your jet ski engine does not replace the flushing of your engine.

You need to run RV & Marine Antifreeze through your jet ski flushing port.

Revving your engine does not get to all the spots, nor does it get all the water out.

When Should You Winterize Your Jet Ski?

You should winterize your jet ski on the last ride you do for the season.

If you can’t do it at that time, then you need to winterize your jet ski before temperatures get below 40F/5C.

How Much Does It Cost To Winterize A Jet Ski?

Some dealerships even do winter storage too! This is great because it gets the jet ski out of your hair for the winter; you can let them winterize and store it, and before the season starts, you call them, and they de-winterize it and clean it for you.

Can I Keep My Jet Ski On The Dock For The Winter?

If you take your jet ski out after it’s been winterized for a winter ride, you’ll need to winterize it again; as soon as the engine is turned on while in water, it’s been de-winterized and needs to be flushed with the RV & Marine Antifreeze again.

It’s best you don’t ride your jet ski after it’s been winterized until the next riding season.

I Forgot To Charge My Jet Ski Battery Over The Winter?

If you did not keep your jet ski battery on charge during the winter, you might get lucky, and the battery is still okay.

If the battery recovers, you’re good, but you’ll need a new battery if it does not. To know what kind of battery to get, I have a guide here.

Can You Use A Heating Lamp Instead?

You shouldn’t use a heating lamp to keep your jet ski warm during the winter and instead do a proper winterization.

With a heating lamp, you have to worry about the power going out or the lamp accidentally burning parts of your jet ski. Some people do this with big boats, but jet skis are a lot more cramp, and it’s best you don’t do this.

Do I Need To Winterize My Jet Ski If I Keep It In My Garage?

If you can keep your garage from reaching below freezing, you can get away with not winterizing to some extent.

You should still fog the engine, charge the battery, coat the components with anti-corrosion spray, and put fuel stabilizer in the gas.