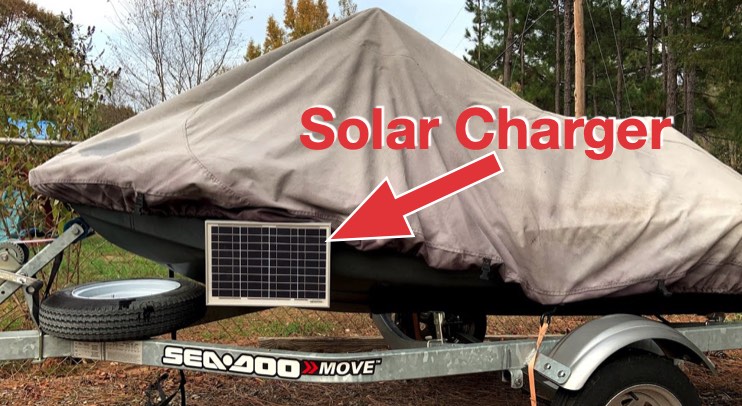 I’m a huge fan of solar battery chargers for jet skis, out of necessity, after seeing so many jet ski customers having trouble maintaining their batteries.

Like clock work, customers were coming in every year at the start of the season with dead batteries.

Some customers tried to solve this problem with battery switches, but it was never perfect and didn’t solve the heart of the problem. The solution was simple, a 5-watt or less solar battery charger is what they needed and is what I use to keep my jet ski batteries going strong for years.

This brings up a new question, what is the best jet ski solar battery charger and which one should you use?

The best jet ski solar battery charger will be one that is 12-volt and under 5-watt, along with it being weatherproof.

Here are my top picks for solar battery chargers that work well for jet skis:

How To Maintain A Jet Ski Battery

The biggest reason you want to use a solar battery charger is because it works the best to maintain your jet skis battery.

Jet skis use a lead acid battery and if it’s not used for months it will lose its charge and die. This is why so many customers have to buy a new battery every year, as they don’t ride them in the off-season.

A solar battery charger, especially one 5-watt and under, doesn’t necessarily charge the battery, but instead helps maintain and keep the battery alive. The slight charge is just enough to keep the battery active and going strong for years.

We only want to keep the battery active and alive, we don’t need to charge it. The solar panel can charge the battery if given enough time, but it’s the maintaining of the charge that we want.

The reason why you want to use a solar battery charger over a regular charger you plug into a wall outlet is for 3 reasons.

Overall, a solar battery charger is just better when it comes to jet skis. Jet skis are stored outside and kept in the sunlight anyway, so might as well keep a solar charger on it.

Before solar battery chargers, I had customers who insisted on having a battery switch. Most boats have battery switches, and this is where many of them got the idea to help keep their batteries alive during the off-season.

After installing a few battery switches on jet skis, I learned it’s not helpful and often caused future problems. The battery switch was also not solving the heart of the problem, as the customer would have the battery off, but still come to a dead battery at the start of the season. The problem is not that the jet ski uses a little bit of power when off, but the battery was going flat because it was not being used.

The reason battery switches don’t work for jet skis is that the battery is much smaller than a boat’s. Smaller lead acid batteries sulfate faster, and that is why they don’t do as well as the larger boat batteries.

Instead of doing another battery switch for a customer, I suggested he use a solar battery charger. Not only was the solar charger cheaper to install, but it would work way better for his needs because he kept the jet ski outside on his slip. To this day, the first thing he tells me every time we meet is how great that solar charger has been for him.

The reason you want to stay at or under 5-watt is because we’re not wanting to charge the battery, but instead maintain them.

When you start to go over 5-watts you need a solar charge regulator that will turn on and off as the battery needs it. A too powerful of a solar panel and you could cook the battery, that is why the regulator is needed.

But if you stay at 5-watts or less, you never produce enough power to worry about. I often recommend getting a 1.5-watt solar battery charger as it’s a good sweet spot, but 5-watts is good if the solar panel is in a shady spot.

Do The Solar Chargers Need To Be In Direct Sunlight?

The solar panel doesn’t need to be in direct sunlight all day, but you want the sun to shine on it for at least 2 hours a day.

Even on cloudy days, the solar panel can pick up enough charge to make it worth it.

Again, we’re not wanting to charge the battery, but instead maintain it. So not much power is needed, just a little bit of sun is enough to keep the battery active and happy. Going days without getting sun is fine too, it’s when the battery goes months without being used that it becomes a problem.