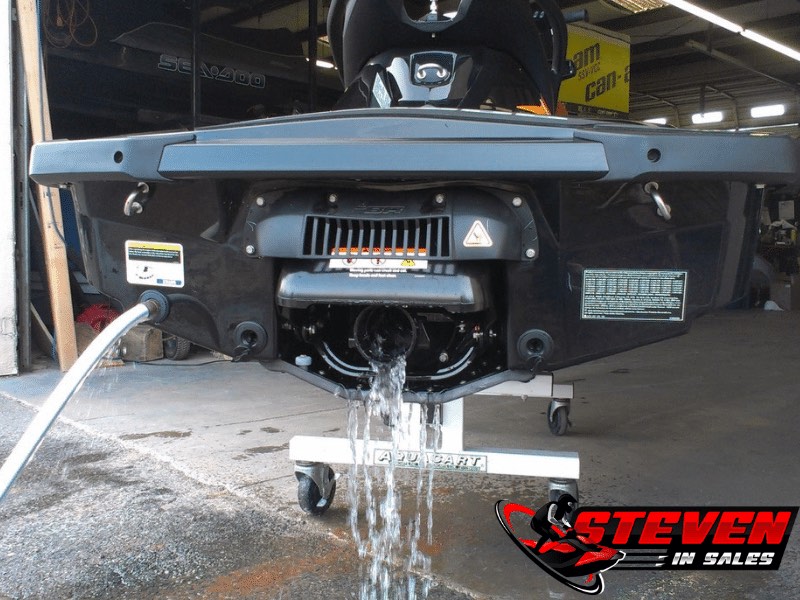 I often get asked if you can run your jet ski out of the water or can a jet ski be run on a trailer?

This fear comes from other forms of boats that require them to be in the water before starting. Watercraft use a totally different system for cooling the engine.

Can You Run A Jet Ski Out Of The Water?

A jet ski can be run out of the water for about 15 seconds.

You should avoid flushing a hot engine, allow it to cool for 30 minutes.

Note: When out of the water you want to avoid aggressive engine revving especially if you have a Sea-Doo with a carbon ring.

Jet skis use water to cool the engine, exhaust, ride plate, and other critical components. If the jet ski is not in the water or hooked up to a water supply these components will overheat and ruin your jet ski.

So it’s best to not leave your jet ski running out of the water for too long.

Running A Sea-Doo Out Of The Water

A Sea-Doo is very different than all the other brands of watercraft on the market when it comes to cooling the engine.

A Sea-Doo engine doesn’t use lake or ocean water to cool it down but instead uses a heat exchanger just like your car.

This does not mean you can run a Sea-Doo out of water or on a trailer for very long. This is because the exhaust system uses lake or ocean water to keep it cool.

If you want to run the Sea-Doo out of the water for a little longer you’ll need to hook it up to the water supply to flush it.

Flushing a jet ski is important if you do a lot of saltwater riding or ride somewhere that doesn’t want water cross-contamination. Flushing is also needed if you want to winterize a jet ski but you don’t use water and instead flush it with biodegradable anti-freeze.

How To Flush A Sea-Doo

In the back of the Sea-Doo is a flush adaptor that is threaded to fit a regular garden hose.

For complete instructions please check your owner’s manual. Here are the general instructions…

Some of older Sea-Doo’s (2-strokes) require a flush adaptor.

The flushing point on a Sea-Doo will always be in the rear for 4-strokes. 4-stroke Sea-Doo’s came around in 2002 and there were only 4-strokes after 2008. Newer Sea-Doo’s flushing port is grey and easy to find on the outside like the picture at the top of this post shows. Older 4-strokes or Sparks the flush point is black and tucked away near the nozzle.

Running Yamaha, Kawasaki, And Others Out Of The Water

The other brands don’t use closed-loop cooling and they do take in water to cool the engine. They still can be run out of the water for a few seconds also but the entire engine and exhaust are not being cooled.

The way these jet skis get water is not like a boat where it has a spinning pump that needs to be in the water. These jet skis use the impeller as a pump and there is a little hole in the pump for it to flow water through to cool the engine.

Please consult your owner’s manual for the correct procedure for running your Yamaha, Kawasaki, and other jet skis on the hose. The instructions are very similar to the instructions for using a Sea-Doo as talked about earlier.

Many manufacturers don’t make it easy and require you to buy a flush adaptor for certain models. To make this easy I’ve listed some options below. It’s still best to consult your owner’s manual first.

Jet Ski Are Loud Out The of Water!

If you do fire up your watercraft out of the water it can be loud and even sound like metal balls rattling in the back.

The rattle sound you hear is from the pump and since it’s not in the water it’s not floating so it bounces around.

The other part of the sound is the exhaust because it’s not in the water and the water is used to muffle the sound.

Running A Jet Ski On The Hose Is Not The Same As Test Riding It!

I need to make a note that running a jet ski on the hose is not a substitute for taking it for a test ride.

Don’t let someone selling a jet ski fool you with “it runs fine on the hose” as it is not the same as running it in the actual water.

Water intake and simply being in the water affect the jet ski very differently compared to running it on a hose and on the water. I’ve had several jet skis run fine on the hose but give a different story once in the water.

If you’re running your jet ski out of the water you may be also cleaning it too. I have a post that shows you how I like to clean jet skis and the tricks I’ve learned over the years.

14 thoughts on “Can You Run Your Watercraft Out Of Water?”