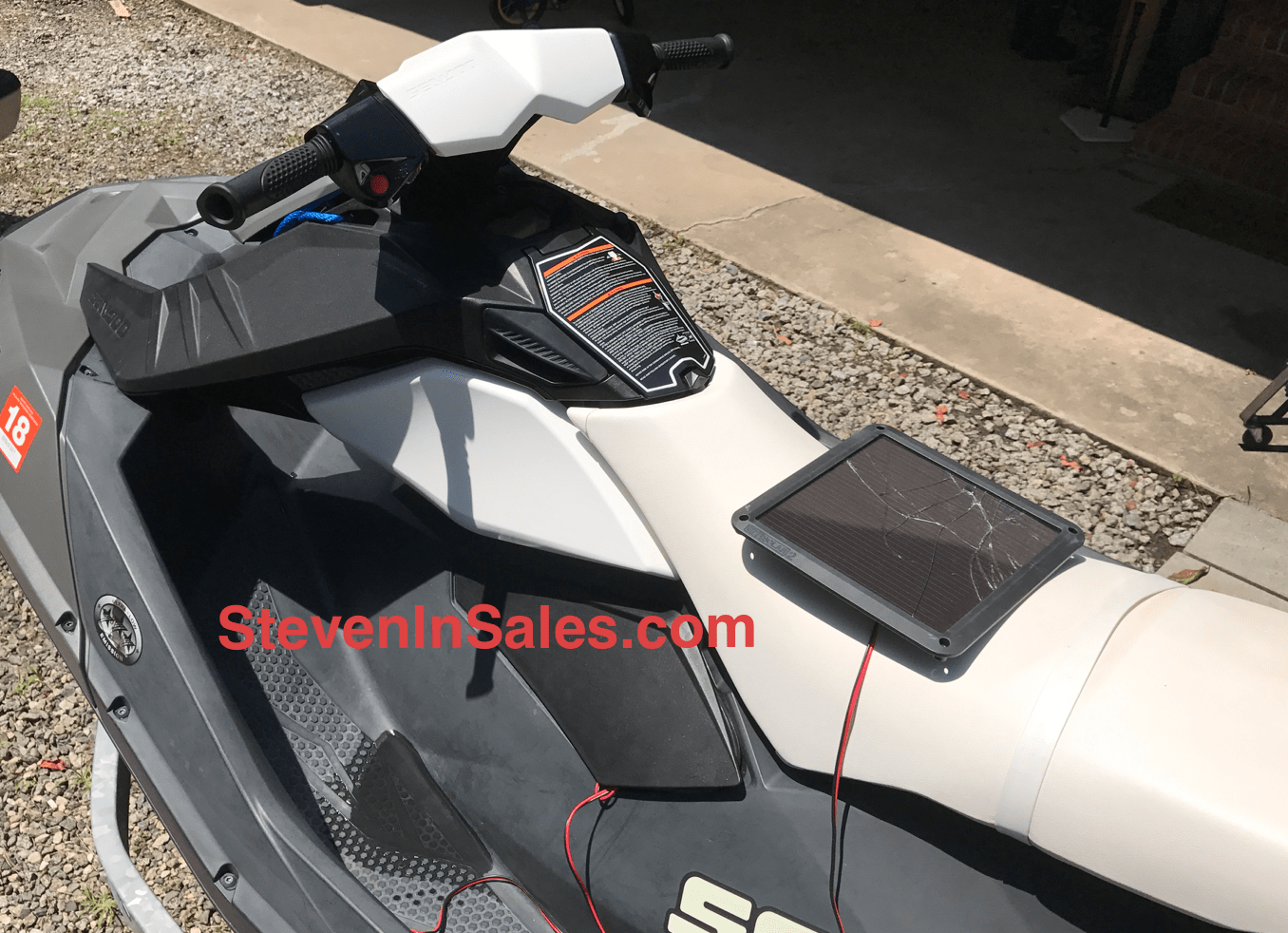 If you ever feel like you’re buying a new battery for your jet ski every year, then a battery charger is a must have for you. The reason why your battery dies so quickly is that you’re not using your jet ski enough.

Batteries go flat if they don’t get used, the same thing would happen to your car if you left it to sit as much as your jet ski.

The next question you might have is “what’s the best jet ski battery charger”? This is what we want to answer in this post.

The best charger has got to be a Solar Charger like this one here (Amazon Link Ad). The reasons are simple…

It honestly only makes sense to have a solar charger. I’ve had customers in the past ask me to get complicated battery switches and wall chargers to setup for their machines. I never understood why anyone wanted to go through this much trouble? Keep it simple!

A solar charger is not meant to charge a dead battery(works more like a trickle charger), it’s meant to keep the battery alive and topped up. If the battery doesn’t get used for weeks or even months, it goes dead. The battery drains a little at night, and by day the solar charger restores that charge.

This cycling is what makes the battery happy and allows it to be able to start for you every time you want to ride.

It’s easy to forget about the jet ski and when you do want to ride nothing is worse than finding out the battery is dead. You avoid this issue by keeping the battery charged.

You can still use wall chargers if you want. If you have power where you keep your PWC, then a battery charger works well.

Just make sure to buy a Battery Tender Junior 12V, 0.75A Battery Charger like this one here (Amazon Link Ad) so that it doesn’t overcharge the battery. Overcharging the battery can be just as bad as letting it die.

Going over 2 amps could fry the electronics, and this is why they say never to jump a jet ski from a car because it supplies way too many amps.

It’s best to avoid using fast chargers as they go over the 2 amps that I recommend keeping under. Plus, a fast charger could fry the electronics of the watercraft.

Never jump start a jet ski from a car or truck, you will fry the electronics.

You can use a jumper box or jumper pack to jump-start a jet ski but this has its own problems. For example, the jumper pack needs to be kept charged too.

I’ve recently found a SuperCap Jumper Pack (Amazon Link Ad) that I keep now in my truck because it can jump start a dead battery using the dead battery. I know it sounds crazy but it works and here is a video proving it works. It’s hard to believe a dead battery can charge this SuperCap enough to start a jet ski but it works.

Keep in mind, a jumper pack is not a replacement for a new battery. Don’t go riding on a dead battery because it could leave you stranded. A jumper pack like the SuperCap is just nice to have around mostly for your truck or car.

21 thoughts on “PWC Battery Charger — What to Buy”