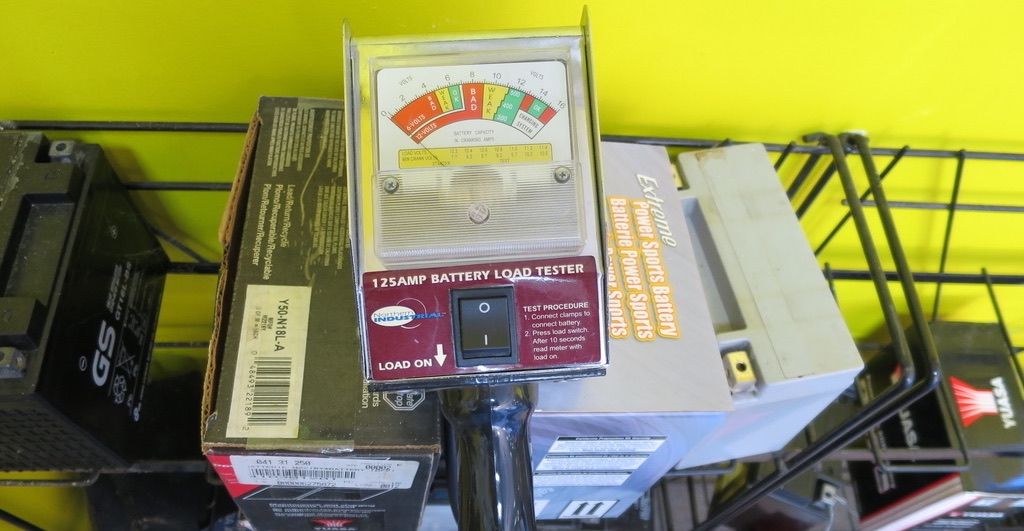 The best jet ski battery charger will be a 12-volt smart charger that charges at a max of 2 amps.

You must not charge over 2 amps and you need to use a smart battery charger. There are also other little details you need to do that we’ll discuss below.

A battery charger sometimes goes by the names trickle charger and battery maintainer too.

Important: Just like a boat, it’s good practice to vent your jet ski for a few minutes before working on it or starting it especially if it’s been sitting or you just put gas in it.

My top pick for the best jet ski battery charger is the NOCO GENIUS2 2-Amp Fully-Automatic Smart Charger. Here are the reasons why it’s my top pick.

My second place pick is the Battery Tender Plus 12V Battery Charger and Maintainer. Here is why I picked it.

Consider getting a solar battery charger like this one here (Amazon Link Ad).

A solar battery charger is the best option if you need to charge or maintain your jet ski battery without a power outlet.

This is what I use on my jet ski to help maintain the battery, and I go over the full details here.

How To Charge A Jet Ski Battery

We have a post here that goes over the steps to charge a jet ski battery.

But here is a short version…

When charging is done, remove the negative cable of the charger first and the positive cable next.

If the battery charger status lights don’t come on when you connect it to the battery, then make sure you have it hooked up right.

If the lights do come on, but the charger says the battery is bad, you need to get a new battery. The battery is too sulfated to recover.

If the battery charger says the battery is charged, but when you start the jet ski, it doesn’t start, then you only had a surface charge. There could be other reasons why your jet ski is not starting as talked about here.

A surface charge is not a full charge, and you’ll need to get a new battery no matter what the charger says about the battery charged status. Only a load tester can determine if the battery is good to start a jet ski and not the LED light on the charger. If you don’t have a load tester, many auto part stores will load test a battery for you, and a lot do it for free.

How Do I Know My Jet Ski Battery Is Bad?

What matters more than voltage is amps, and a load tester can only test this. Many auto parts stores will load test a battery for you.

The easiest way to tell if your jet ski battery is bad is by listening to the engine area when you start your jet ski.

A weak battery will struggle to turn over, especially in the water.

A super-weak battery will give you multiple clicking noises when you press the start button, as talked about here.

A completely dead battery may power on the gauges, but nothing happens after that.

Can You Recharge A Jet Ski Battery and How Often?

Jet ski batteries are rechargeable, but they will die and won’t recharge if you don’t use your jet ski for 4+ months.

It’s best to recharge your jet ski battery every 3 months that you don’t ride.

So if you don’t ride your jet ski in August and September you should charge your battery at least once in October.

Tip: If you’re not riding for a few months you should take the battery out and use the smart chargers with a maintainer built-in to keep the battery good when in storage.

Does Your Jet Ski Need a Battery Switch?

No, your jet ski does not have a battery switch and does not need one either.

The reason why your jet ski battery dies is not that the jet ski is always pulling a little power, but instead, it’s because the lead-acid battery goes flat if it’s not being used regularly.

If you ride your jet ski all the time, the battery stays active and lasts for a long time because it’s being used. However, when you leave it to sit for too long, it goes flat, and adding a battery switch doesn’t fix this.

Instead of a battery switch, consider getting a solar charger. When you’re not riding, hook up the solar charger, and it will keep the battery active and lasting for longer. See how I have my solar charger set up on my jet ski.

You want to charge your jet ski battery at a max of 2 amps. Lower amps like 0.75 to 2 amps are fine too.

Going over 2 amps charges the battery too fast for these small batteries, and you can end up cooking the battery, which is very bad.

How Long Does It Take To Charge A Jet Ski Battery?

It takes about 12 hours to charge an empty jet ski battery fully.

It can take longer or shorter depending on what the smart charger considers is best for your battery. This is why we suggest using smart chargers as they turn on and off as they’re needed.

You need to let your battery charge fully and slowly if you want the battery to last. It’s best to not rush these things.

When Should You Replace A Jet Ski Battery?

The most I’ve gone without replacing a jet ski battery is 5 years, but that is because I kept it on the solar charger when I was not using it.

Ideally, it would be best if you replaced your jet ski battery every 3 years.

If you’re replacing your jet ski battery every year, then it means you’re not riding it enough or charging it enough during the off-season. Lead-acid batteries go bad when they’re not used for months.

You can sometimes recover a dead battery that’s been sitting for a long time by charging it, but a good bit of them don’t recover.

Why Does My Jet Ski Battery Keep Dying?

We have a guide that explains why your jet ski battery keeps dying here.

Can You Jump Start A Jet Ski Instead Of Charging It?

No, do NOT jump-start a jet ski battery, especially from your car or truck. I explain why this is bad in this post.

What Battery Do I Need For My Jet Ski?

What type of jet ski battery you need and what is the best one to get can be found in this guide here.

Do You Need To Add Water To A Jet Ski Battery?

Adding water to jet ski batteries is not very common these days.

Most manufacturers are moving to sealed jet ski batteries, which makes adding water a thing of the past.

Even if you have a non-sealed battery, I would not add water to it and instead, get a new battery. The trouble you would have to go through to get the distilled water, get a hydrometer, and mess with dangerous sulphuric acid is not worth it if you ask me.

No, riding your jet ski will not fully charge your jet ski battery. It may give it a surface charge but nothing lasting.

Jet skis use a stator and not an alternator like your car.

A stator only maintains a charge and does not fully charge as an alternator would.