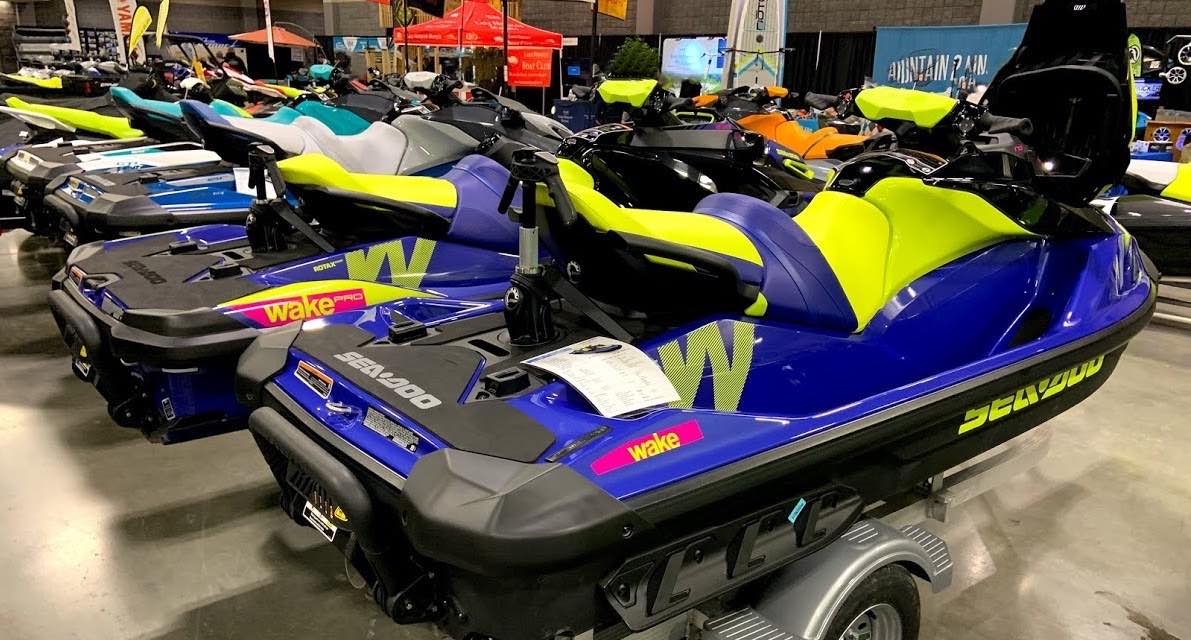 Sea-Doo vs. Yamaha reliability is a huge debate on the internet.

The fanbase is quite large on both, but I want to try to put that to the side and go deeper on the subject.

I want to talk about the nuances and show you it’s not a Sea-Doo vs. Yamaha thing, but which model from each manufacturer is the most reliable.

Let’s Get Some Background Before We Talk About Reliability

Generally, people say Yamaha makes the most reliable jet skis on the market, and in some cases, this is true, but we can’t ignore the biggest factor… market share.

There are 3 main manufacturers, Sea-Doo, Yamaha, and Kawasaki.

Sea-Doo has a 16 point lead over Yamaha, and this tells me a few things.

Point 2 is the biggest one; let’s break it down with numbers.

And for another example, let’s say both manufacturers have 0.5% of jet skis give them issues.

This doesn’t mean Yamaha is more reliable; it just means there are fewer Yamaha’s on the market.

This is why I’m not sold on the idea that Yamaha is more reliable. That and how well the jet ski was maintained, as talked about later, means a lot more to me.

One thing that needs to be brought up about Sea-Doo vs. Yamaha regarding reliability is tech and features.

Sea-Doo is more willing to push out new tech and features long before Yamaha is even thinking about it.

For example, Sea-Doo came out with iBR (braking system) in 2009, and it wasn’t until 2015 that Yamaha had their version. Knowing Sea-Doo, they were working on this for 3 to 5 years before releasing it. It taking Yamaha 6 years to release their version tells me they did not expect something like this to happen.

Sea-Doo is not afraid to try new things and push the jet ski industry forward.

If Sea-Doo never pushed the market towards brakes, I doubt we would ever have them. Brakes on a jet ski are so revolutionary that it’s becoming commonplace today. It’s a good thing, too, as it makes boaters safer and gives drivers better control at the dock.

Yamaha Is More Slow And Steady

With Sea-Doo pushing the envelope, Yamaha is kind of the opposite.

Sure, they innovate on hull material and design, but it’s Sea-Doo that brings the things that people never think of.

It’s this slow and steady pace that many people like about Yamaha. It also helps Yamaha lend itself to people saying they’re the most reliable brand.

When you think about it, this makes for a beautiful harmony with Sea-Doo and Yamaha. You honestly need both styles as it makes for a better product for the customers.

How Well Was The Jet Ski Taken Care Of?

The reliability of a jet ski depends more on how well it was taken care of and not the brand.

It doesn’t matter how reliable the manufacturer is if the jet ski owner never did proper care.

This is the most important factor out of this whole article. How well the jet ski is taken care of will always triumph whatever opinion someone has about a manufacturer.

Also, having a good and trusted dealer can help keep your jet ski running reliably too. The debate might not be a Sea-Doo vs. Yamaha one, but how reliable and skilled your local dealer is at taking care of the products.

Every dealer is internally ranked by the manufacturer and must keep up to date on the products. This adds more nuances to the debate but worth knowing and asking your dealer how well certified they are on the product.

What Makes For A Reliable Jet Ski?

You do have other things to consider, like the hull, which has no moving parts, but in general, the fewer moving parts, the better.

So if you want the most reliable jet ski, you need to look at the models with fewer parts to break.

If this is the case, then you want to avoid models with superchargers. A supercharger gives more top speed to a jet ski but also makes it use more gas too.

The superchargers in Sea-Doo and Yamaha are different but do the same job. While Sea-Doo seems to have gotten more spotlight on their superchargers, the truth is that Yamaha superchargers fail too.

This is where doing proper maintenance comes into play. Supercharged models can last a very long time so long as you do the proper and timely maintenance.

If doing extra maintenance plus the extra cost of gas worries you, then consider not getting a supercharged jet ski. There is plenty of non-supercharged jet skis to pick from, and they’re all fast, especially if you have never ridden a jet ski before.

With Sea-Doo releasing the Spark with its Polytec hull and it being made of “plastic,” it’s really open up a new avenue for the reliability debate.

The only real downside I’ve seen to a plastic hull is that it robs you of a couple of MPH.

I own a 2014 Sea-Doo Spark and had no issues with its plastic hull. If anything, I find it to be the future of hull design.

I could go on about how much I like the Polytec hull, but this video has done a great job of explaining this hull, so I recommend you watch it instead.

I’m personally split as I can see the pros and cons of both.

Sea-Doo uses closed-loop cooling on all their 4-strokes.

Yamaha uses open-loop cooling on every jet ski they ever made.

The biggest perk for Sea-Doo closed-loop system is that the engine never takes in saltwater. This is often an expensive upgrade for boats that run on the coast. If you don’t take in any corrosive and dirty water, the longer your engine will last.

Though, jet ski engines are made from material that can hold up to the saltwater. You still have the issue of debris clogging the system and thus overheating and destroying the engine.

Either way, you honestly can’t go wrong. Both have their pros and cons, so I wouldn’t make this a deciding factor when considering reliability.

Why Do Rental Companies Mostly Use Yamaha Jet Skis?

One point that gets brought up about which jet ski manufacturer is more reliable is that rental companies mostly use Yamaha waverunners.

Rental jet skis are rode hard, and as a business, they want the most reliable machine. If rental companies are going with Yamaha’s, then it’s a closed case – Yamaha makes the more reliable jet ski!

Well, there is more to it.

Rental companies are businesses, and businesses want to maximize profit. So yes, a reliable jet ski is essential, but what is just as important is the jet ski price.

Before the Sea-Doo Spark, Yamaha made the cheapest jet ski on the market. So it made more sense to run Yamaha for your rental business because they were cheaper.

Yamaha being the cheapest jet ski on the market is not the case anymore. Fun fact, when the Spark came to the market rental companies were calling me left and right to get them. The Spark was also better on gas, so it cut down running costs, and the rental companies made more money.

So saying Yamaha is more reliable because more rental companies buy them is not true. Rental companies are about maximizing profits and will go with the cheaper to buy and run machine.

You also have other factors like where the rental business is located and their local dealer’s inventory. Both manufacturers even have commercial options and promotions, which can be a deciding factor on what the rental company picks.

Notice how all those jet ski rental businesses used Sea-Doo GTI’s. There is a reason for that, which is explained in the next section.

What Models Do I Consider The Most Reliable?

Both manufacturers have a model that stands out from the rest in what I consider reliable.

Overall, I consider the Sea-Doo GTI and Yamaha VX models to be the most reliable jet skis.

The good news is that these are on the cheaper end for both manufacturers. The bad news, these two models sell like crazy, especially on the used market.

Both models have more than enough power to pull a tube, and both can reach speeds from 40mph up to 55mph, depending on what HP you have.

So there was some truth to the idea that you should look at what jet ski rental companies use to know the most reliable jet ski. It wasn’t about the brand, but what model from each brand was the most reliable.

If you want the most reliable jet skis on the market, stick to either the Sea-Doo GTI’s or Yamaha VX models.

4 thoughts on “Sea-Doo vs. Yamaha Reliability – What Is the Most Reliable Jet Ski?”