Do you ever feel like you have to replace your battery every year? It can be quite puzzling why your battery in your Sea-Doo, Yamaha, or even Kawasaki Jet ski keeps dying and needs to be replaced often.

Signs of a Bad Battery 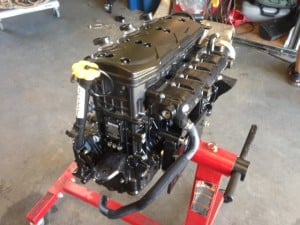 How you know you have a dead battery is when you put your key on and all your machine does is multiple clicks. This is not to be confused with one click you get from a bad starter relay.

Also, a battery could be so bad that the watercraft doesn’t even turn over or barely does anything. Some watercraft will even say “12 volt low” to let you know the battery is weak.

Does the Jet Ski have a Charging System?

I often get asked if riding around for a bit will charge your battery on your jet ski. This works for cars but not for Jet Ski engines.

Your jet ski does have a charging system but it’s a Stator and not an Alternator as your car has. A Stator does not fully charge your battery but instead maintains a charge.

So riding your jet ski will not fully charge it, it will put a slight charge back but when you go to leave the watercraft for a few hours the battery will be dead again.

Can I Jump My battery on my Jet Ski?

NO! Do not jump your battery on your Jet Ski from your car battery. Whatever you do don’t, I REPEAT, do not hook your car battery up to your Jet Ski!!!! This will overcharge the system and fry your electrical and electronics on Jet Ski’s are not Cheap. Let me say this one more time since it happens too often, DO NOT JUMP YOUR JET SKI BATTERY!!!

Why does my battery go dead?

When a battery just sits it goes bad by sulfating. Sulfating is when the plates on the battery build up and cause it to lose charge over time. The same thing would happen to your car if you only drove it a couple times a year, but happens faster for a Jet Ski because its battery is smaller.

How to make your Jet Ski Battery Last Longer?

The best way to keep your Jet Ski battery lasting for years is to keep it on charge when you’re not using it. There are two ways to do this, a wall charger like this one or a Solar panel.

I recommend a 5-watt solar panel or maybe even a 2.5 watt and just hang it off the jet ski when you’re not using the jet ski. What the Solar Panel does is keeps the battery alive by smacking it with just enough power to keep it from sulfating.

Smart Battery Chargers will come on when it starts to lose power and will cycle until you take it off. I prefer the solar panel option because it as simple as pulling the panel out of the storage compartment and hanging it off the watercraft. The Solar Panel doesn’t need a wall outlet and just works.

What If I can’t charge my battery?

You’ll need to charge your battery if its dead. You could also disconnect the negative cable to keep any excess power draw from happening but this is merely a band-aid on the problem.

Also, the wise tell about how you can’t put a battery on concrete is false as long as you keep a battery charger on it. It’s best to keep the battery in a warm place too. Keeping the battery somewhere cold is not good either.

If your battery is too far gone then it will be time for a new one.

Click here to read my post about the best batteries to use and how to install a battery into a Seadoo.

It’s best to get your battery out or keep it on charge during the winter.

I’ve seen many people go out to their watercraft when the winter is over and try to get it ready for the summer. They try to start the machine but the engine won’t start because the battery is dead.

They’ll call up whoever winterized their jet ski and complain that they didn’t do it right and want the problem fixed.

If you did not keep your battery charged with a battery charger or solar panel then there is a good chance your battery will be dead by the time warm weather comes around. The cold and the lack of being charge kills the battery quickly and often it can’t come back to life from it.

Also, if it’s been about 3 years or more than it might be time for a new battery. I would wait til spring before I put a new battery into the machine.

If you find that your jet ski battery won’t stay charged then it’s a good chance something is draining it or the Stator has stopped charging. To check to see if the stator is bad is to take the jet ski out of the water and turn it on for a few seconds and test the voltage of the battery. The battery should be pushing close to 14-volts, if it’s not or hovers at or below 12 volts then something is wrong with the charging system.

Other things that will keep a battery from charging…