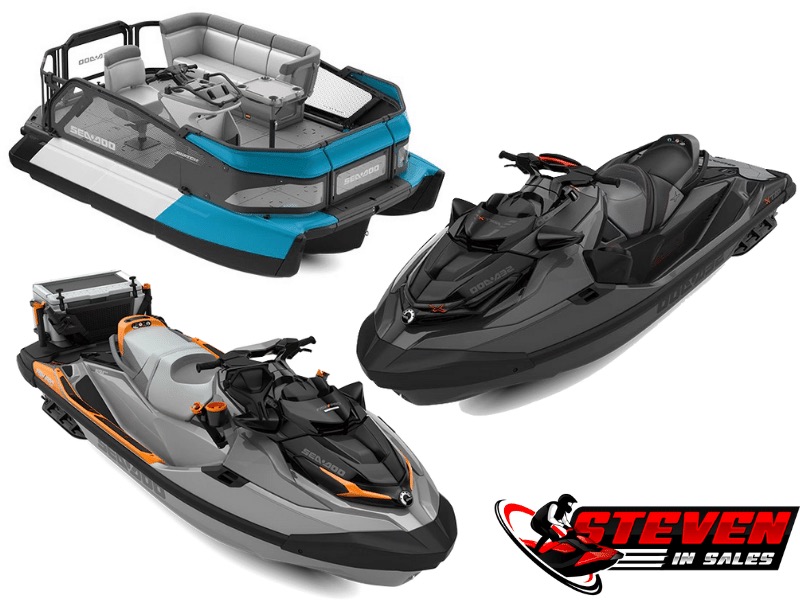 2022 is the year Sea-Doo got colors right, more Fish Pro options, and changed the pontoon world.

Sea-Doo released a few more things for their jet skis, but the Fish Pro’s and the Switch stole the show. The real heavy hitter this year is the new Sea-Doo Switch, as it will for sure change the pontoon boating world.

Let’s go over the changes and the little details for the 2022 Sea-Doo model year.

We now have the Fish Pro Scout 130 based on the GTI body, a smaller and cheaper option.

The new step above is the Fish Pro Trophy 170. The Trophy comes with a freaking livewell, and a hook up to rinse off the cooler area. An anchor that is built into the side and easy to stow. A better fish finder and GPS unit that is a touch screen too.

Then the best part of the Fish Pro Trophy 170 is the modular swivel seat. Yes, just like other fishing boats, the Trophy has a swivel seat with a backrest, and it all stores away in the Sea-Doo.

The Trophy begs the question of why would you want a fishing boat in the same price range? You can get the Trophy, and when you’re not fishing, you have a freaking jet ski to play on.

Learn more about the Fish Pro features for 2022 in the video below.

Sea-Doo is now giving a better full-color display to the following models.

Along with keeping it on the GTX Limited 300 like it was from last year.

The models with the full-color display will also be able to connect to the Sea-Doo GO app and plan rides and share rides with other GO app users.

iDF On Some GTI Models

Sea-Doo is bringing the iDF option to the recreation category of watercraft.

iDF did have a rocky start last year with a few issues, but it has gotten better.

What is great about iDF is what it can do for us in the future. It could give us a true neutral or even gears on a jet ski. Gears on a jet ski could mean small and more fuel-efficient engines without giving up performance. But as of now, iDF is an excellent idea, but I won’t consider it a must-have.

This year Sea-Doo got the colors right!

The real winner is the all-black-everything on the RXP-X and RXT-X. This is the year to get an RXP-X or RXT-X as this color scheme is the best they’ve ever done, and knowing Sea-Doo, it won’t last.

Even the green on the GTX Limited looks amazing but yet still classy.

The blue and orange on the WAKE models are great too! I’ve noticed the promotional pictures of the WAKE’s don’t look as good as it does in the real world so keep that in mind.

What can I say, Sea-Doo has excellent colors this year, and not a single one is overdone or boring either. They simply got it just right.

The real star of 2022 is Sea-Doo’s all-new pontoon called the Switch.

I never thought I would say those words, a Sea-Doo Pontoon.

Pontoons are the best-selling boats on the market, go to any boat show, and you’ll see a sea of pontoons. So naturally, everyone wants them, but like other boats, they’ve become boring and expensive.

Let’s face it, pontoons have not changed much, and they carry dull energy with them.

The Sea-Doo Switch not only made pontoons cool again but affordable too.

Pontoons have gotten so expensive that it’s not uncommon to see them cost as much as a house. It seems the pontoons have lost their roots of being an everyday person’s affordable family boat.

With the new Sea-Doo Switch, it’s going to change everything, just like how the Sea-Doo Spark changed jet skis forever. The market will never be the same, and it’s a good thing.

Driving A Sea-Doo Switch Vs. Other Boats

I want to focus on the driving aspect of the Sea-Doo Switch compared to other boats.

With a “normal” boat, you need to be quick and confident with your movements. You can’t be slow and lazy when shifting forward or reverse, or the gears won’t catch.

And since a “normal” boat requires you to move the entire outdrive, it has more moving parts for hydraulics and requires more steering wheel movement.

Driving a modern boat feels like the guy from the Wizard of Oz flipping switches and levers all over the place. Or at least this is what new riders see when learning how to drive a boat.

The Sea-Doo Switch will be perfect for new boat owners.

The Switch uses a handlebar, so the tight steering with a jet drive is easier to understand. You also have brakes, yes brakes on a boat.

This will make it easier to control the Switch than a similar pontoon. Also, your hands never leave the handlebars, unlike other boats where you got to spin the wheel fast multiple times while reaching with your other hand to shift into reverse without overdoing it.

Driving the Switch is the same as driving any Sea-Doo jet ski with iBR. You can learn how to drive a jet ski here.

The Switch Is Modular

Being able to take seats out and adjust the layout of the Switch is a huge selling feature.

You want a big open area to fish off, you can. You want more seats to carry the total capacity of the boat, you can. No other pontoon boat gives you this much flexibility.

What got me the most excited is that you can take the seats out of the boat which makes it easy to clean the boat and the seats. No tools are required; pull a latch, and they come out.

Sea-Doo went with a Tri-Hull design for the Switch pontoon.

This is ideal for rough waters as it takes the chop a lot better. It also works out at speed as you only ride on the center hull, and the side hull adds stability in cornering.

The hull material is Polytec that the Sea-Doo Spark and GTI PWC use. This material has come a long way since it was released in 2014. The material helps keep the weight down but retains a strong frame.

Something huge to keep in mind about jet drive engines is that there is no exposed prop.

Outboard engines on pontoon boats have the prop blades exposed, which is super dangerous, especially if you do any pull sports.

The impeller of the Switch is tucked inside the middle hull, which makes it safer than other pontoons with outboards. If you ask me, it’s something to keep in mind and makes the Switch a better family boat.

The top speed of the Sea-Doo Switch ranges from 26 mph up to 44 mph, depending on the engine and length you choose.

If you’re going to do any pull sports, I suggest going with at least the 170HP engine.

All Sea-Doo watercraft use a closed-loop cooling system to keep the engine cool.

Instead of taking in lake or ocean water to cool the engine, they use anti-freeze and a heat exchanger much in the same way your car uses a radiator and anti-freeze.

So if you plan on having your Switch in the ocean, know the engine is not taking in any ocean water to cool it. This is often a premium for other boats but standard on all Switch models.

But if you get the Switch with the 230HP engine, the intercooler does take in ocean water to cool the air. Either way, it’s still a good idea to winterize any Sea-Doo Switch.

It’s common for most boats, even pontoons, to use a standard cut key.

The Sea-Doo Switch will have a DESS Key that also doubles as the safety lanyard. And yes, the lanyard needs to be attached to the driver when the boat is in motion; it’s a safety thing.

This makes your Switch have better security than even the most expensive pontoons on the water.

One of the best parts of the Sea-Doo Switch will be all the accessories you can add.

The bimini top is a must for any boat, and Sea-Doo is not using the same flimsy one that everyone else uses. Instead, the Sea-Doo bimini is easy to put up and sturdy, too, even at full speed.

You can even get a camper top option to enclose the cabin for cold winter rides.

With LinQ attachments, you can use the cooler, bags, and so many more things with no tools required. The seats are even easy to take off and move around.

If you do get a Switch you’ll need a few must-have boat accessories as discussed here.

Not only that, but you have 3 different styles too, the Switch, Switch Sport, and Switch Cruise.

The Sea-Doo Switch starts at $17,999 but can quickly go over $20,000 and even reach the $40,000 range. This price includes a trailer which is not always the case with other pontoon boats.

The 100HP Engine Is An Odd One For The Switch

I’m at a loss on why Sea-Doo went with a 100HP engine instead of the 130HP they already have?

It just seems silly to have another engine option when the 130 already exists.

If the engine is anything like the Spark engine, the 100HP engine is just the 130 de-tuned to 100HP. So why go through all that trouble, especially when the Switch is heavy and could use all the HP it can get?

The only thing I can think of is fuel economy or regulations of certain bodies of water.

Having the 100HP limit makes sense as the 13-foot Switch is competing with 50HP pontoons, and it would suck to lose out because a waterway has a 100HP+ limit.