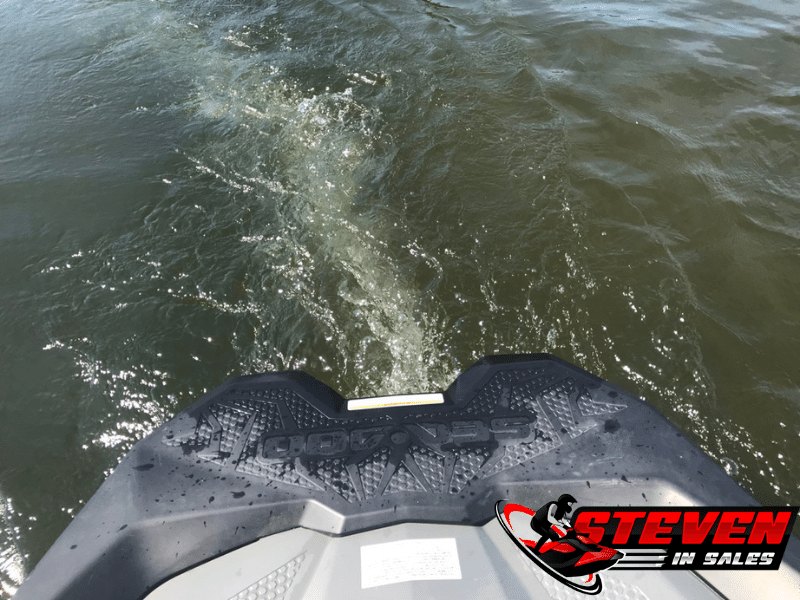 Falling off a jet ski has become harder these days as jet skis have gotten bigger, but there is a chance you can fall off.

Many people have questions and fears that surround falling off a jet ski, and there is a lot of bad information that comes along with it.

In this article, I want to address the common questions you may have about falling off a jet ski.

Do Jet Skis Turn Around When You Fall Off?

A jet ski will NOT turn around or go in a circle if you fall off it, as you should have the safety lanyard connected to your life jacket and the jet ski. So if you fall off a jet ski, the lanyard is pulled and the engine shuts off.

The thinking that jet skis go in circles if you fall off is an old and way outdated thing. Before safety lanyards, which came around in the ’90s, a jet ski would idle away and often in a circle as that is how the handlebars were left when the rider fell off.

Nowadays, a jet ski won’t start unless you have the safety lanyard attached and once removed the engine shuts off. On models with brakes, it’s not uncommon for the jet ski to go into neutral (a spot between forward and reverse) when the key is removed, which acts as a slight brake to keep the jet ski from drifting too far from you.

What Happens If You Fall Off A Jet Ski?

If you fall off a jet ski and the safety lanyard was properly connected, the jet ski’s engine will shut off and drift a little away from you.

The jet ski will not come back to you, it’s a dud until you get back on it.

Along with connecting the lanyard properly, you should also be wearing a life jacket approved by the coast guard for jet skis. When you fall off the jet ski, the life jacket will keep you afloat.

It’s also important you get a life jacket that is the correct size for you. I see far too many people get life jackets that are too big for them, and that will only make things worse.

Life jackets don’t go off t-shirt sizes, it’s best to try them on to see how they fit. This video does a great job of showing you how to pick the correct size life jacket.

How Common Is It To Fall Off A Jet Ski?

Falling off a jet ski has become less common these days as jet skis have gotten a lot bigger. Though, catching a wave wrong or doing something silly can still have you fall off.

Falling off, or even starting off in the water, was a common thing for jet skis made before the early ’00s. Since 2002 and every decade since, jet skis have gotten more stable.

The more people you have on the jet ski, the less stable it becomes.

The smaller the jet ski, the less stable it becomes, too.

Rec-Lite watercraft are the least stable and the cheapest watercraft you can buy. The Recreational models of jet skis are more stable than the Rec-Lite, with the Luxury models being the most stable.

To see what category of watercraft fall under Rec-Lite, check out our 2022 Sea-Doo vs Yamaha vs Kawasaki post.

How To Get Back On A Jet Ski From The Water?

If you have someone else on the jet ski, make sure they are supplying a counterbalance when you’re getting on.

This video will show you how to get back on your Sea-Doo.

If the jet ski was flipped, follow this guide on how to flip it, as it’s important you flip it the right way.