Sea-Doo just released their 2019 model line up and the biggest take away from this event is going to be the Fish Pro. Not much in a color change for some of the models but we do have some new accessories and tech that are super useful.

But when digging deeper into it, there was a lot of little details that are actually big deals that no one is talking about.

So let’s talk about the good, the bad, and the ugly for the 2019 Sea-Doo watercraft.

Note: For more information on the 2019 Sea-Doo models please be sure to see Sea-Doo’s website here.

Before I start gushing over how great the new Fish Pro is and all the other obvious things I need to talk about this picture below. 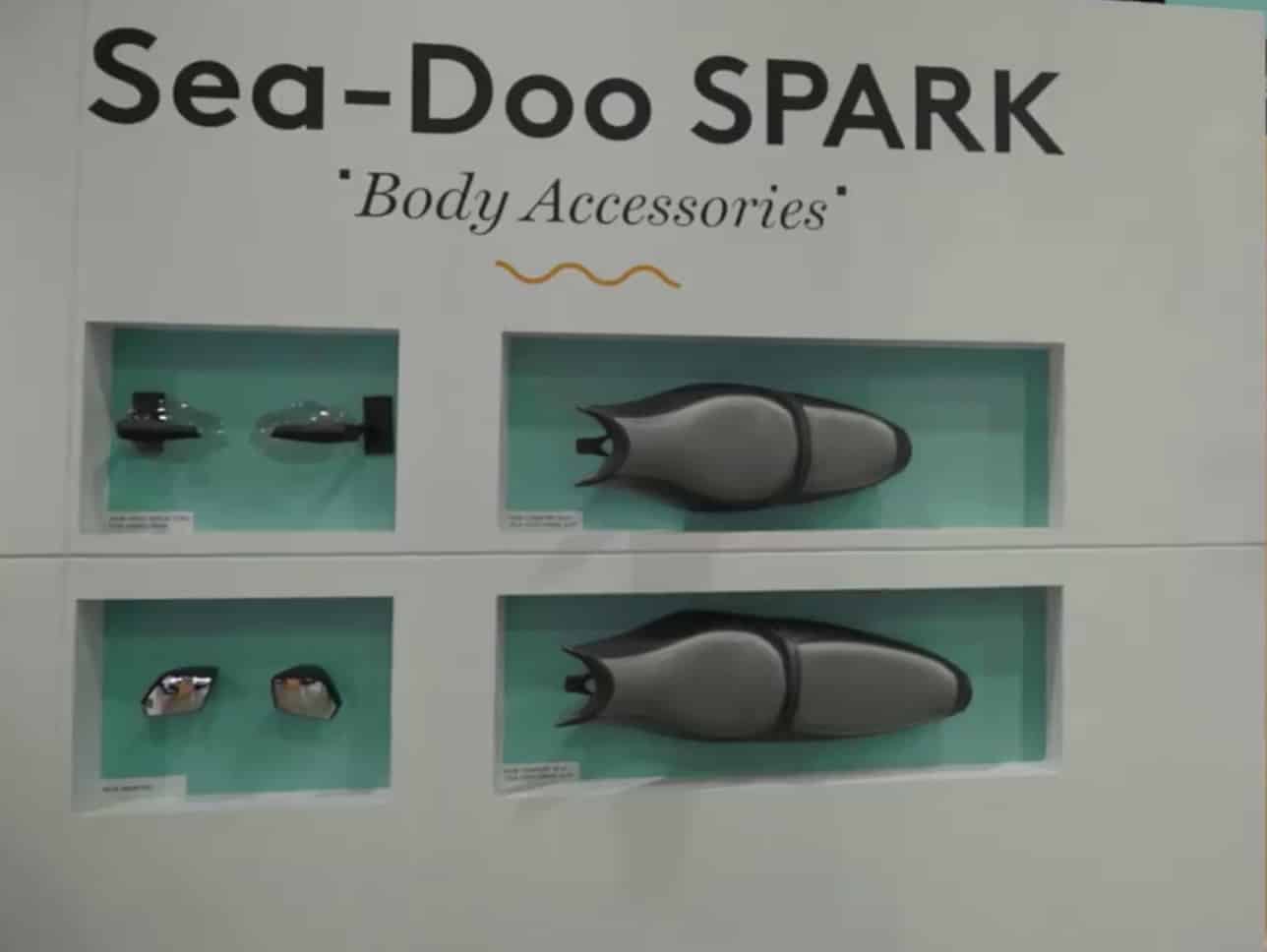 Is that mirrors for a Sea-Doo Spark and a nicer more plushier seat for the Spark too?! Why is no one talking about this??? The two most significant issues with the Spark seem to have been solved, and no one cares.

This is front page news type stuff here. The best selling watercraft that re-sparked the industry have the accessories that everyone has been begging for and not one mention of it anywhere.

Had to get that off my chest.

What is the one thing no one expected but also expected Sea-Doo to make eventually? A fishing style jet ski. The one thing no one planned for sure was them to hit it out of the park. Now we know why Sea-Doo went after making a bigger and more stable hull for the GTX line up, it was for the Fish Pro.

The Fish Pro is not an afterthought, it’s not a slap this or that on this current model and call it a fishing style jet ski. All the little details that make up the Fish Pro shows us that someone with experience in the field built it. 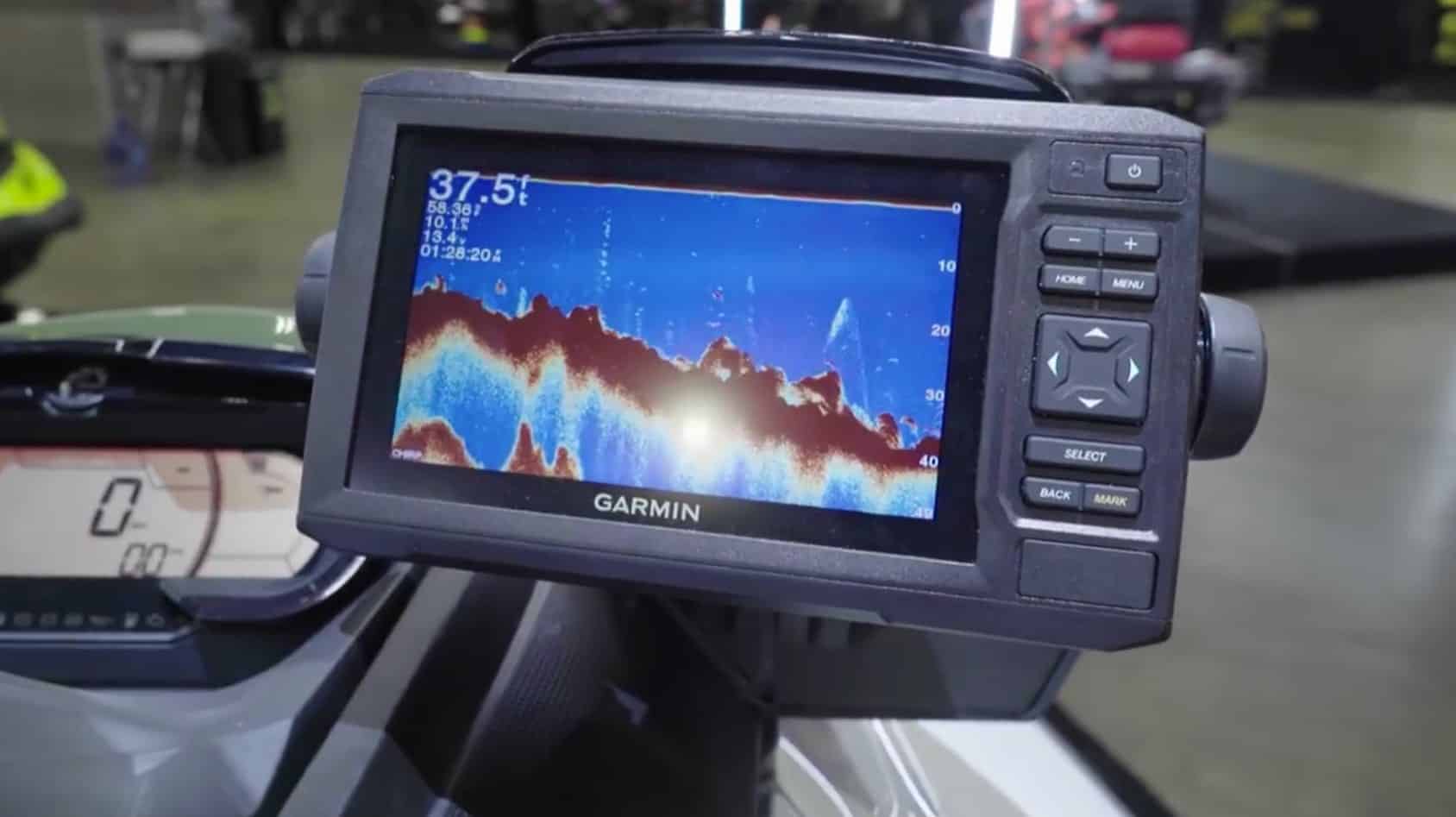 Things like the GPS and fish finder comes with it from the factory. This means you don’t have to install and run wires to get this. The side gunnel footrest is just pure genius, the angle, and ability to give you leverage is well thought out.

Let’s not forget the huge, and I say HUGE cooler! With the LinQ system its easy to install and secure, no tools require and no drilling into your jet ski. But the best part of it is that they did not forget the rod holders. While the competition dances with the idea and gives you cup holder replacements to add a fish finder they don’t talk about the most essential part of a fishing jet ski – where you put the fishing rods. 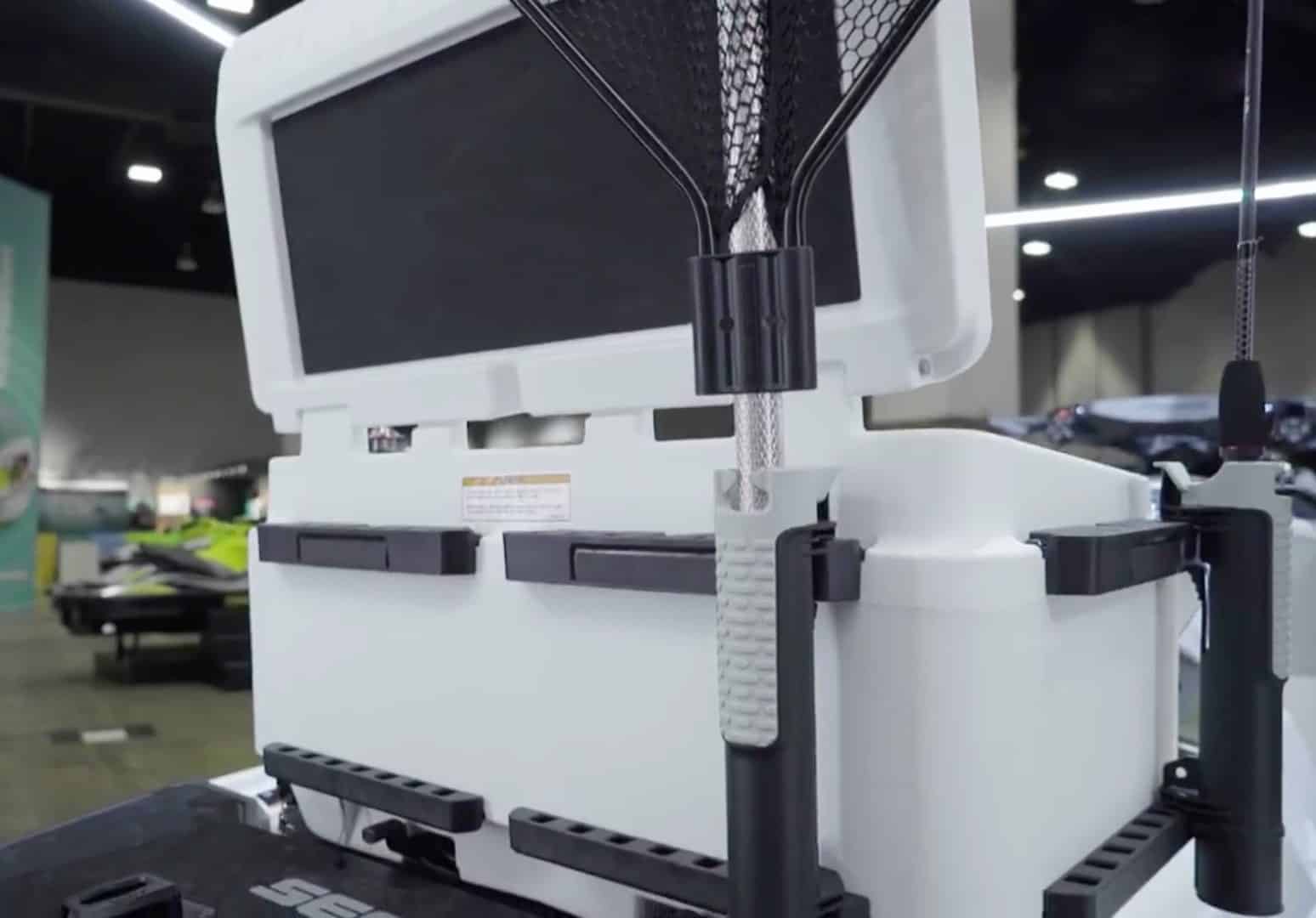 Let me tell you I don’t fish, its not my thing. But looking at this Fish Pro, I’m quite jealous for many reasons. The biggest one being that they went with an 18.5 (70L) gas tank on this thing. It makes perfect sense since you want to be out there for longer when fishing.

The second thing that makes me envious of the Fish Pro is the Garmin GPS. I could care less about the fish finder, but having that mount and colossal GPS come with the unit has me wanting it. 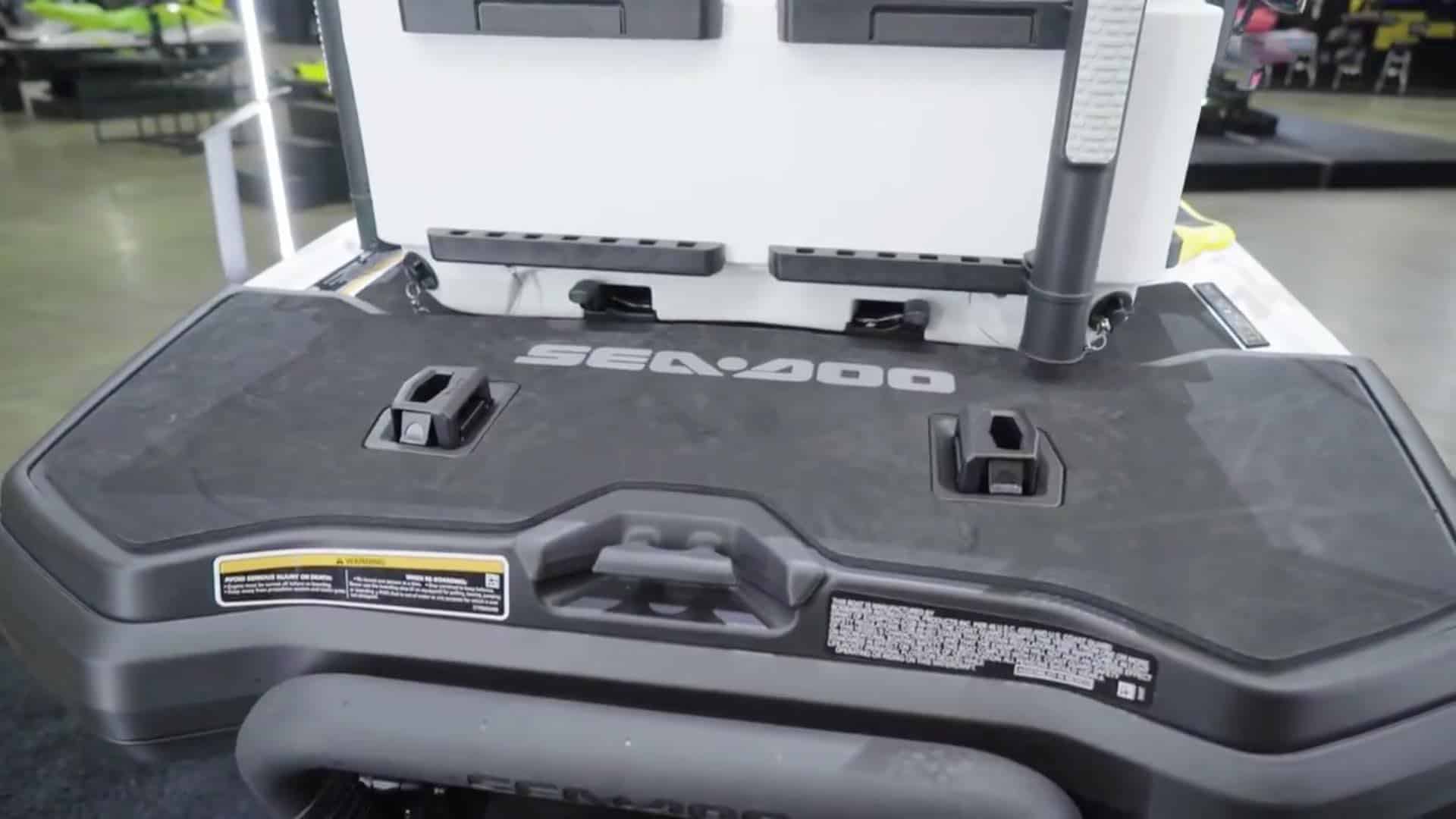 The last thing and what makes this a great buy especially for fisherman will be the Rotax 155 Engine. If you ask me, this has got to be the best engine Sea-Doo has ever made. The thing is “bulletproof” and more than powerful enough for the average rider. Plus, no supercharger to worry about or service and its not as fuel hungry as the supercharged models either.

For the price, I was expecting it to cost more. It’s only $2k more than the plain GTX 155. I honestly was expecting it to be well over $16k, at $14,799 this a steal. This is about the starting price for many new fishing boats, but when you’re not fishing on it, you have a jet ski. You could fish on the weekdays and pull the kids on the tube on the weekend!

It seems to some that the new BoomBox Stereo you put on the Spark is not a hit for them. I on the other hand like the idea. Sure it’s not the best looking thing but its super practical. 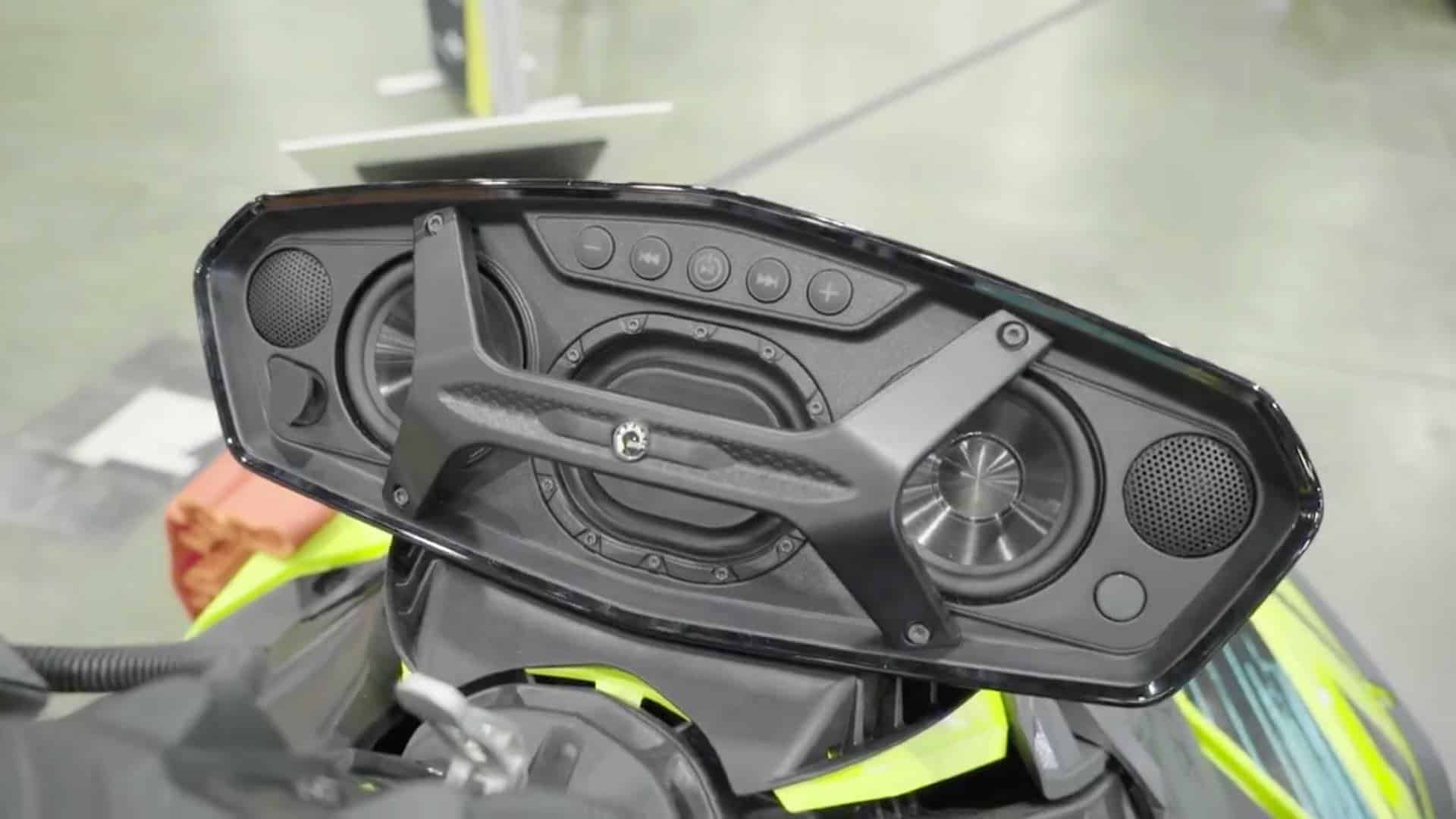 It seems to be coming on the Trixx models as an option, and you can install it on any Spark that’s been made. Even the 2014 first generation Sparks will have the ability to install this speaker system.

With the output power of this stereo its a win. No dinky speakers and no need to heavily modify your Spark to get halfway decent sound on the water. You can even take the boombox with you when you dock at the beach. With 24 hours of battery life, this thing is a must have for any Spark owner.

More models are getting the LinQ quick attachments systems, even the Spark and GTI models.

I don’t think color was Sea-Doo strongest point in 2018 and 2019, but the colors for the RXT-X and RXP-X are just amazing!

That red, black and gold are so nice. Its an Ironman theme for sure and I’m loving it!

The RXT-X for sure will be a hot seller in 2019 so make sure to get your deposits in quick.

It looks like Sea-Doo took the GTS out of the lineup. I consider this a good thing. The GTS lacked any reverse and was the same size and pretty much the same ski as the GTI but lacking reverse.

Now it seems to be only GTI 90 or GTI 130 in that category which are far better machines for the general public. The GTS was only good for rental companies but if I ran a jet ski rental I would want the GTI 90. I would be afraid to put people on a jet ski with no brakes or reverse. Good riddance GTS!

More Themed Watercraft In The Future?

With Sea-Doo showing that they love themes like Wake models, Trixx, and now Fish Pro I’m sure we’re going to see more themed style watercraft in the future.

It’s not about who is the fastest anymore, but now who is the most useful.

Why no electric trolling motor? The gas engine, especially from a jet ski, will be too much disturbance for fish. An electric drop down trolling motor would have been better than the pseudo trolling mode setting from the engine.

Sea-Doo is now selling handlebar wind deflectors. Not quite sure on this one. Never seen anyone use or ask for this accessory before. Maybe if you ride when its cold these could be useful but other than that I don’t see the point.

No new touchscreen is a double edge sword. Sure it sucks but it might be for the good. Sea-Doo is taking the ergo approach with keeping everything at the handlebars, everything within reach of the thumb so you don’t have to take your hands off the handlebars which could be a safety issue. 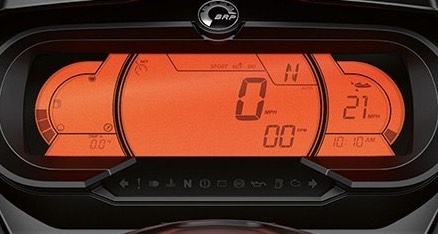 Besides the touchscreen, the new gauge is ugly. Well… it doesn’t feel like a watercraft gauge at all. That is because its the same gauge they use on their Can-Am Side By Sides. Maverick Sport uses this gauge. It even has the cutouts, that are blacked out, of the turn signals and parking brake. I can just hear it now people asking where their parking brake is because they can see the LCD cutout for it.

There is some good news though. This is the same cutout that is used in the Cam-Am Spyders that have the big and beautiful color screen. The Spyder RT is a good example of this gauge in action. So this could be a placeholder for the future gauge that will be this much nicer colored screen that the Spyder RT has.

What Do You Think?

Whatever it is let me know in the comments.