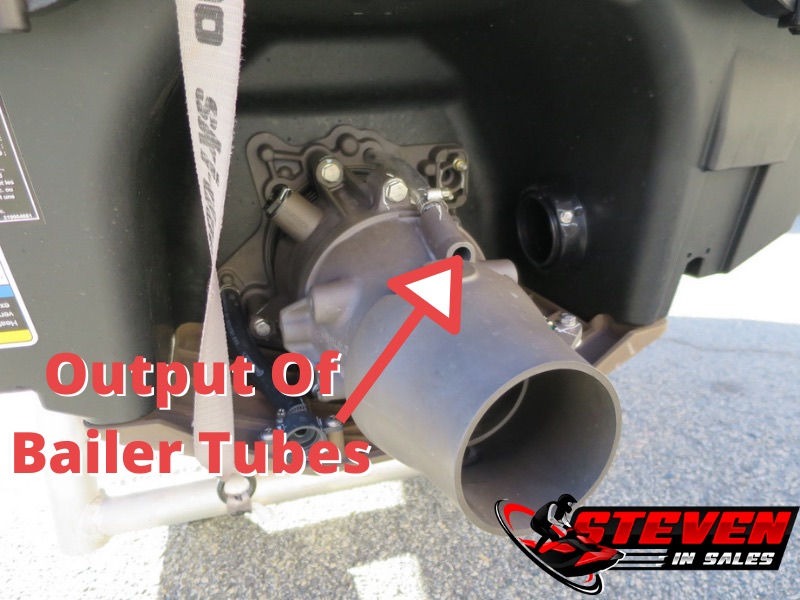 Most boats tend to have a system to remove water from its hull, or bilge as it’s called, and that system is a bilge pump.

Most bilge pumps come on automatically, with many having the option to manually turn one on. No boat is a perfect seal, so having a pump to suck out the water is a good idea.

Since a jet ski is a type of boat, many wonder if they have a bilge pump? The honest truth is that most jet skis don’t come with bilge pumps, but have another system in place to suck out excess water.

Bailer tubes work the same way as a bilge pump, it sucks extra water out of your bilge, but the difference is that bailer tubes only work when the engine is on.

Bilge pumps run off electricity and get that power from the battery. So long as the battery in your boat is good, your bilge pump will suck out any extra water.

Jet skis on the other hand use bailer tubes, and they work off the vacuum that is created by the jet pump to suck out any water in your hull. So the engine on a jet ski must be running in order for the bailer tubes to work.

Bailer tubes are simpler than a bilge pump, it’s literally only tubes.

The jet pump has one or two tubes sticking out that run into the hull. The tubes go up and then back down, so no water comes in, but they do have a one-way check valve too.

Since jet skis are direct drive systems, when the engine is on the impeller is moving, and that impeller moving drives water out the nozzle. Above the nozzle is the bailer tube(s), and water that rushes by creates a vacuum and sucks out any water in the hull through the bailer tubes.

When you shut the engine off, the impeller is not moving and thus no water will be sucked out.

If you see your jet ski is taking on water, the best thing you can do is to start moving and get to land as the jet pump sucking out the water is the only thing keeping you afloat.

Can Bilge Pumps Be Added To Jet Skis?

A bilge pump can be added to a jet ski, in fact, many jet ski manufacturers even sell a kit to make it easy. You can also buy other bilge pumps (Amazon Link Ad) too!

Some bilge pump kits do require you to drill a hole in your jet ski, so the water can get out. If this makes you nervous, it’s best you let the dealership do it for you.

The bilge pump kits from the manufacturer don’t always have a manual switch and instead use a float switch that comes on when enough water is in the hull.

I’ve installed a few bilge pumps for Sea-Doo’s before; It’s not hard, just annoying. You’ll need to tap into the fuse box and drill your holes, but if you don’t mind messing with wires and going slow, it can be done by most people.

Having a bilge pump will depend on your riding style and where you ride.

If you ride hard or in rough water, a bilge pump is a smart idea. If you never take out your drain plug while on a lift, it’s a also good idea to get a bilge pump and keep the battery charged too.

A bilge pump is not foolproof and not meant to be a solution that allows you to keep your jet ski in the water all the time. Jet ski batteries are small and a bilge pump running all the time will drain it, getting a solar charger can help.

The reason jet skis don’t come with bilge pumps is that they’re not as open as boats.

Boats are giant tubs floating on the water, the deck of a boat drains into the bilge. So if you go over a large wave or caught in the rain, all that water dumps on the deck and then the bilge, so a bilge pump is needed.

A jet ski is more of a closed system, while not completely sealed it’s still not as open as boats.

Also, jet ski manufacturers don’t expect you to keep your jet ski in the water for weeks or months like you would with a boat. They expect you to keep it on a trailer or drive-up lift, this is what they say to do in your owner’s manual.

Will A Bilge Pump Keep Your Jet Ski From Sinking?

A bilge pump will keep your jet ski from sinking from a small leak, but the pump can only do so much for large leaks.

A common misconception people have about bilge pumps is that they will guarantee your jet ski won’t sink, this is not true and if the leak is big enough, the bilge pump won’t do much.

I’ve seen guys somehow put a fist size hole in their jet ski and the bilge pump didn’t stop it from sinking. Combine with the small battery of jet skis, a bilge pump is not perfect.

But, overall, It’s better to have a bilge pump than not have one, just remember it’s not some magic cure that many make it out to be.

Also, if anyone is wondering, a jet ski won’t completely sink. If you look in the hull, you’ll see a bunch of foam. That foam’s only purpose is if the jet ski completely takes on water, that is what keeps it from sinking to the bottom of the lake or ocean. The foam is located at the nose and midsection of the jet ski, so if the jet ski sinks, the nose will float.