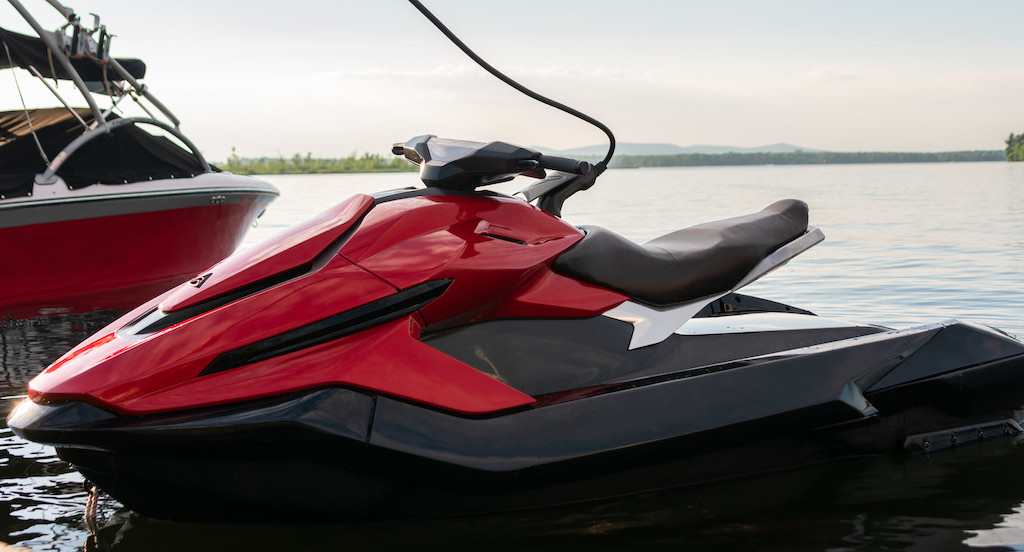 With the success of Tesla electric cars, you can feel the shift to electric coming to jet skis. Many new electric jet ski manufacturers are coming in and big names like Sea-Doo are showing off prototypes.

This raises many questions about electric jet skis, like are they going to replace gas jet skis? Are they safe? Is it even worth it?

Let’s talk about all of this and then some.

But they don’t have to.

There is a segment of jet ski owners that would benefit the most from an all-electric jet ski.

Who Are Electric Jet Skis Made For?

One example of an electric jet ski is the Orca from Taiga Motors; it can go about 2 hours on a charge.

The charge time can take several hours depending on the outlet used (10 to 12 hours if 110-volt outlet, 240v is faster).

While this may seem off-putting at first, this is not bad news for people who live on the lake.

In fact, an electric jet ski makes more sense to someone who lives on the lake than a gas-powered jet ski.

Why Electric Jet Skis Are Perfect For Lake Residents

You also have the fact that most people don’t ride for 2 hours straight. You often stop and rest as the waves can wear you out.

I ride for 30 to 45 minutes before I get tired and need a break. Jumping waves and playing around can wear you out. Going another round while on the lake is about all you want to do before daily life events take over.

So a 2 hour ride time on an electric jet ski quite good!

But here’s the best part of an electric jet ski… no gas.

If you live on the lake, you either have to bring gas cans down or go to a gas dock. Both of those events suck. Gas cans are heavy, and filling up at the gas dock is super expensive and messy.

As for an electric jet ski, you just unplug and go. That is light years more convenient to deal with than filling up with gas.

Clearly, electric wins this one.

Don’t forget you don’t have to go somewhere to “fill up”. You don’t have to join some yacht club or look for pumps. Your home is where you fill up, and it’s always filled up because you can keep the electric jet ski on charge when you’re not riding.

This is another huge one that many lake residents will love to hear.

It’s going to be easier and cheaper to maintain an electric jet ski than a gas one.

A gas-powered jet ski needs to have an oil change once a year, and if it gets below freezing where you live, it needs to be winterized.

Since an electric jet ski doesn’t have oil, there is no need for an oil change. Since it’s an electric motor, it’s not taking in water to cool it, though this could be a thing if a manufacturer implements it. The Orca does not take in lake water, so no need to winterize it.

There will be some things you’ll need to get done, but since an electric jet ski has fewer moving parts, it’s not as bad as a gas jet ski.

The cost of operating and maintaining an electric jet ski makes more sense for someone who lives on the lake. Not having to deal with as much maintenance is the real selling point.

The reality is that jet ski repair shops get backed up for weeks during peak season with service and repairs. You could miss out on important riding time waiting for your gas jet ski to be serviced where an electric jet ski is ready to go.

No, models like the Orca Performance can do 65mph with the 180hp option. That’s up there with the muscle-craft jet ski class.

Electric cars of the past put a damper on modern electric vehicles making people think they’re slow when they’re not. Electric cars dominate in drag races as shown below.

Electric motors have a lot more torque, which is super helpful in jet skis. That bottom end is needed to jump waves and getting out of your own wake.

It’s a new world, and electric everything is taking over. It won’t happen overnight, but it’s for sure happening.

What About Water And Electricity?!

Probably the number one thing on everyone’s minds is that electricity and water don’t mix.

This is very true!

But it’s also not that simple either.

While you don’t want to get the electronics and the battery wet, things can be done to protect them. Many electric jet ski manufacturers will have protections in place to keep water away from the sensitive components.

If the protections in place are anything like what Tesla does, we should be fine.

It’s still important to not get a lot of water in the hull of any jet ski.

Even gas-powered jet skis can suffer from flooding. I’ve seen people blow their engine because the ski sunk, and they tried to start it with water in the cylinders.

Both gas and electric jet skis suffer this issue, so I would not hold sinking against either one.

The Downsides Of Electric Jet Skis

I can’t be all positive about electric jet skis, so here are the downsides.

An electric jet ski is not going to be for people who tour or go on long rides.

This is why I say their perfect for people who live on the lake and just want to get on and go. When you’re done, you just put it back on charge, so it’s ready for the next ride.

If you’re using a standard 110 Volt outlet, like the kind you plug a lamp into, the charge time can take overnight. (10 to 12 hours)

You will have the option to get a 240-volt charger installed and it will decrease charge time quite a bit.

Charger Needs To Be Installed

For the 240-volt charger option, which I recommend most people go with, it will need to be installed by a professional.

This is a powerful outlet, and you’re near water; this is a good time to let a pro handle it. Even the 110-volt option still needs to be handled with care so let a pro mess with it too.

This will be another cost you’ll need to consider.

Having a strong dealer network will be critical for electric jet skis to take off.

The customer needs a strong dealer presence for buying and repairs.

This is why I hope the big names like Sea-Doo, Yamaha, or even Kawasaki would step in. Sea-Doo has shown off an electric GTI prototype before and knowing them, they have a working model.

Electric jet skis will not be cheap, but they’re also not as much as you think.

Probably not the fairest comparison, but it does help show that an electric jet ski is cheaper to run.

Not only that, but it will also be less hassle as it has fewer moving parts. When your time is worth a lot, having the least hassles is a considerable saving. You’re not making family memories if the jet ski is in the shop getting an oil change, that is for sure.

Electric Is Here To Stay

Or if you own a yacht and want a jet ski to store in the yacht, an electric jet ski will be easier to deal with.

The gas jet ski is not going anywhere fast as long-distance riding will be gas only for the foreseeable future. Charge ports will need to be more readily available before electric anything can take over.

What’s most interesting to me is electric jet skis are just the start. Electric boats or even electric pontoons will be next. The family that only gets out on the weekend will love these boats and be the ideal customer.

I’m quite excited about what the next 10 years have for jet skis. Who knows, electric might be the next big move, just like how we went from 2-strokes to 4-strokes.

3 thoughts on “Electric Jet Skis – Is This The Future?”