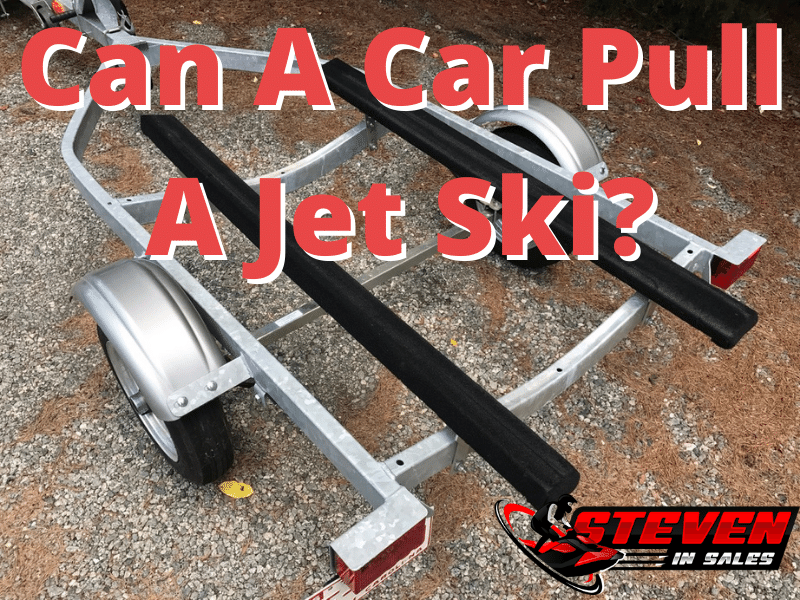 Most cars on the market can have a tow hitch installed which allow you to tow small trailers.

This brings up the question of whether a car can tow a jet ski or two jet skis on a trailer?

Most cars can tow a trailer with a total weight from 500 pounds to 2,000 pounds, but this number doesn’t always factor in the power needed to get out of a steep boat ramp and a loaded down jet ski.

Boat ramps come in many sizes and shapes. You have some that have a gentle slope into the water and you have others with a dramatic drop and potholes on the ramp. Combined with the jet ski gear, liquids, and the trailer being water logged when pulling out, you need to stay well under the rated weight.

You may need to adjust this rule depending on your ramp and your car’s power and traction abilities. Failure to follow this rule could keep you from being able to pull your car and trailer out of the boat ramp, or it could have your car rolling into the water.

Always go off the unbraked weight as most single and double jet ski trailers don’t have brakes. (At least for most states in the US)

You want to use the unbraked weight just to be on the safe side, especially on jet ski trailers, as you need the power to get them out of the water on a steep ramp.

It’s best to look in your owner’s manual for the exact towing capacity of your car.

Keep in mind this weight must include the jet ski, jet ski gear, fuel, and trailer weight.

To see how much your jet ski weighs, check out our post here.

To see how much your jet ski trailer weighs, check out this post.

What the car manufacturer says and what someone selling you a tow hitch say don’t always match. While a hitch maybe available for your car, it doesn’t always mean you should tow with your car. Just understand the risks when you go against the manufacturer’s recommendation.

How Much Horsepower Do You Need To Tow A Jet Ski On A Trailer?

If you’re going to tow a single jet ski with a car, you should have at least 150HP or at least 180HP for two small jet skis on a trailer.

As talked about earlier, it’s not the going that is the problem, but the stopping. Anything with wheels can be moved, but having enough horsepower can be helpful, especially on steep boat ramps.

All that horsepower won’t mean much if you can’t get the traction, so having good wheels on your car is important. Ideally, you want an all-wheel drive car as that will give you the most traction.

What Jet Skis Can Be Towed By Cars?

If a car is your only option for towing a jet ski, then you’ll want to stick to the Rec-Lite category of watercraft.

A Rec-Lite watercraft is the Sea-Doo Spark and Yamaha EX models. These also happen to be the most affordable models on the market. I’ve sold these models to people who towed them with Prius and Mustangs before.

To learn about the current 2023 Rec-Lite watercraft, we have a post comparing them here.

For some cars, you can get away with the bigger Recreational models, but I would avoid the Luxury and performance models for sure.

Can A Sedan Tow A Jet Ski?

A sedan is just a 4-door car, and it can tow a jet ski trailer following 1/3 rule as talked about earlier.

Can A 4-Cylinder Car Pull A Jet Ski And Trailer?

A 4-cylinder car can pull a jet ski on a trailer, depending on the horsepower and towing capacity.

It’s best you stick to our 1/3 rule as talked about earlier in this post.

Can A Hatchback Pull A Jet Ski And Trailer?

You’ll be able to pull a jet ski on a trailer with a hatchback, but you must follow our 1/3 rule as talked about at the start of this post.

If you’re going to use a car to tow a jet ski, you still need the light hookups for the trailer.

You’ll often need to do more work to get the lights hooked up for your jet ski trailer from your car. Panels in the trunk often need to be popped out for a bit to hook into lights. It’s more involved and when done it’s often a messier look as the trailer lights hang from the trunk.

Tip: If you get a shop to install the hitch and lights, always ask them to test the lights before you leave. I can’t tell you how many times I had people pick up new trailers and the lights don’t work, and 9/10 times it was the wiring on their cars. I’ve gotten to the point that I keep a trailer light tester (Amazon Link Ad) on all my trailers as it plugs in the middle, so I know for sure what the problem.

A truck or SUV is the best vehicle to use for towing jet skis on a trailer.

A truck and SUV will often have higher towing capacity along with the hitch and light hook-ups already. It’s a cleaner look and adding these things to a truck or SUV is a little easier too.

The Ford F150, Chevy 1500 and Ram 1500 are the best all around vehicles for towing jet skis. These trucks can tow a single and double jet ski trailers just fine. I’ve even towed a 4-place jet ski trailer with a F150 with no issues, just make sure you have a trailer braking controller.

It’s always about the braking and pulling out of the ramp that is the most important, even when it comes to trucks.

Should You Disconnect The Lights Before Putting A Jet Ski Trailer In The Water?

Ideally, you should disconnect the trailer lights before putting it in the water.

This protects the lights of the trailer and your car or truck.

But, to be honest, I never do this. Through the years, I’ve never noticed it be a problem. Either I’m lucky or it honestly doesn’t matter.

So, I’ll say yes you should, to play it safe, but me personally, I never do.