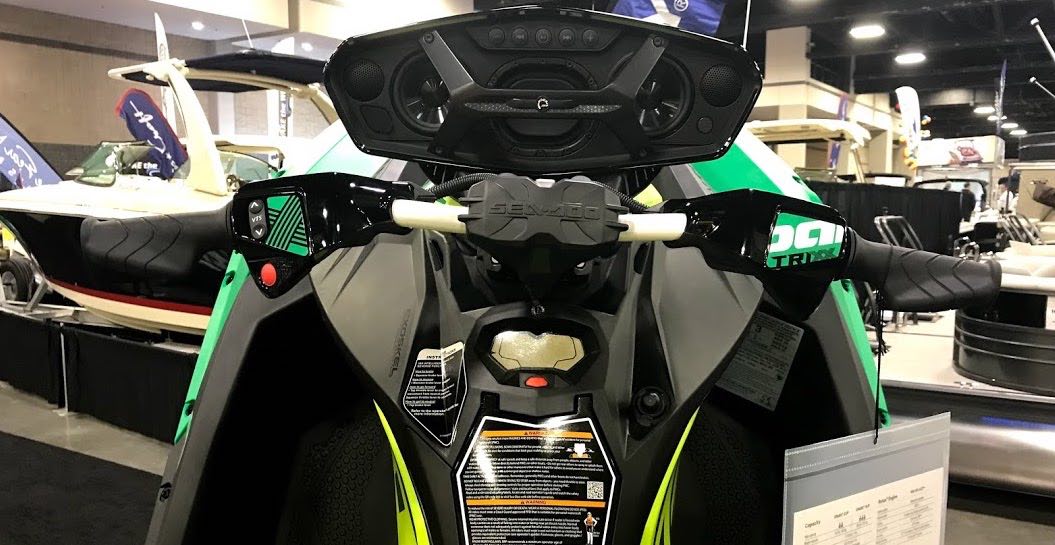 Stand up jet skis vs. sit down jet skis – which one do you buy?

This guide is for new riders who want to know the difference between a stand-up jet ski and a sit-down jet ski. Learn a little about the history of both and see which one is a better fit for you.

Before we get into it, let’s go over the features that make them so different.

Stand Up Jet Skis VS. Sit Down Jet Skis – Compared

Since this guide is geared towards new riders, I need to explain the common terms.

The word “jet ski” will get thrown around most because that is what most people understand. The other names are Personal Watercraft(PWC) and Waverunner.

This can be confusing, so I’ll mostly stick to using jet ski on this website. If you’re wondering the names are for each manufacturer. Jet Ski belongs to Kawasaki, Waverunner belongs to Yamaha, and PWC is the more general term for all, but often Sea-Doo uses it more. You’ll also see people using Sea-Doo to describe a jet ski, and that is fine too.

While stand up jet skis are becoming rare these days they were one of the first ones around.

The creator of the first stand up jet ski was Clayton Jacobson II. He wanted a motorcycle of the water and was trying to mimic that with the stand-up jet ski. He figured standing up would give you more control like it does on a dirtbike.

He tried at first with Sea-Doo (Bombardier at the time) but it never really took off in the 1960s.

With the failure, Jacobsen went to Kawasaki, and it took off for them. Kawasaki called it Jet Ski, and that sprung what we know today.

With Kawasaki having such success Sea-Doo jumped back into the market in the very late 1980s with their sit down PWC. Being able to sit down made the rider more stable in the water and built up rider confidence. Over the years this focus on rider comfort cause the jet skis to get bigger over the years till the Sea-Doo Spark re-SPARKED the industry.

You also had Tiger shark, Yamaha, Polaris, and many others try their hands at making PWCs. In the end, you were left with only 3, Kawasaki + Sea-Doo + Yamaha.

A little story time… I had a customer come in one day looking at Sea-Doo’s. He said he used to work for them and said if I could tell him the original name that Sea-Doo was going to be called he would buy it then and there.

Sadly, I had no clue.

He told me the original name was going to be “Sea-Dog,” yes dog, but due to a translation error, it was Sea-Doo. I don’t know about you, but Sea-Doo sounds better then Sea-Dog.

After looking this up, I found out that he was thinking of Ski-Doo which is a sister company to Sea-Doo and the Ski-Doo was supposed to be Ski-Dog which make sense as it was a snowmobile replacing dogs sleighs. The name Ski-Doo carried over to Sea-Doo, and the rest is history.

Who Makes Stand Up Jet Skis?

As of now you only have Kawasaki(SX-R) and Yamaha(SuperJet) making stand-up jet skis.

Of the 50 or so models available from Sea-Doo, Yamaha, and Kawasaki only 2 are stand-ups. For the stand-up jet ski vs. sit-down jet ski debate it looks like the sit-down models have won.

Around 2007 Sea-Doo did have a stand-up jet ski called the 3D. It was based off the XP hull and had 3 different riding modes. Standing, cart, and knee seat. It was popular when it came out but died off quickly. It was also big for a standup but the few times I got to ride the 3D it was a blast.

The biggest market for Standups is racers, and that is what Yamaha and Kawasaki build for.

It was also only recently that Kawasaki even came back with a stand-up model and not only that brought the first 4-stroke stand-up.

Why Are Stand UP Jet Skis Not Popular?

You would think since the stand-up jet skis are smaller than the sit-down models they would be cheaper, but they’re not. There is not much demand for them so they don’t make as many which keep cost higher.

Go With Sit Down or Stand Up Jet Ski?

My general recommendation is to go with the sit-down jet skis. The people wanting the stand-up jet skis are already in the sport and won’t need me to tell them to get one.

You’ll find a sit-down jet ski better all around especially for families. You can carry more cargo and pull tubes where a stand up can’t do either.

You’ll also find it easier to resale your used sit down jet ski than to sell a used stand up.

Unless you race them or want the thrill of a stand up jet ski there is no good reason to get one. The sit-down watercraft have won the battle in the end.

Are Stand Up Jet Skis Hard To Ride?

Yes, but only if you never rode one before.

Here is a great video showing you how to ride a stand-up jet ski.

How Can You Learn More About Sit Down Jet Skis?

I have several guides on this site where I compare every model to each other.